What's New
Through the conflict, life carries on in Ukraine
A FOCUS on Mission
Must Patience Be So Slow?
Harold Jantz: A Heart for the Mennonite Story
Lorlie Barkman: A Life of Creative Engagement
Last Days, First Days
Women in Ministry: Bertha Dyck
January Moment in Prayer “Holy Spirit—Fill Us!”
The Church as the Patient Body of Christ
Advent: Making Much of Jesus: Christmas Day
Home Life & Faithfeature articles New life at the root

The story of shrinking churches is becoming all too familiar across Canada. Declining attendance. Aging membership. Mission drift.
Across town, there are stories of growth. Numerous baptisms. An ethnically, socio-economically, and generationally diverse congregation. Conversions from other religious backgrounds and more mundane stories of simply finding hope and life in Jesus Christ.

What if these stories could become one?
Over 2018, the faithful but aging congregation of Kitchener (Ont.) MB Church joined with vibrant and growing WMB Church, Waterloo, Ont., to form one church in two locations to “make more and better disciples.”
It is a vision of being better together.
“God has allowed the seniors [at KMB] with incredible faith to say ‘whatever it takes to reach our grandkids…’” says WMB pastor Chris Stevens. “With open hands, they’re saying ‘this is God’s church,’ and releasing it over to partner with WMB.”

“We’re a nice community, comfortable, but we’re not seeing many people come to Christ, being baptized,” says KMB moderator Harvey Goossen. Since the 1990s, membership plateaued; new members largely came through circulation from other congregations.
The board invited Dave Jackson of L2L (then the Canadian Conference of MB Churches’ leadership development arm) to take them through a ReFocusing process.
“ReFocusing helped identify that we need to do things differently,” says Goossen. “It forced us to deal honestly with our past.
“We realized we needed to make a bold move.”
After a providential conversation between KMB interim lead pastor Alex Suderman and Stevens at the EQUIP study conference in Abbotsford, B.C., KMB invited Stevens to discern with the board what revitalization might look like.
While Millennials are moving into and revitalizing downtown Kitchener just outside the church doors, KMB was remaining the same. “We have a lot of older people (70 percent over 65)…. We realized we don’t have the skills to do church planting on our own,” says Goossen.
The value of collaboration was extolled at the Ontario conference level, nationally, and by Randy Friesen of Multiply (MB Mission), who challenged churches to “think differently.”
In the meantime, Suderman felt a call to serve with Multiply and was preparing to leave the congregation.
So KMB leadership approached WMB for help. “They are family; we planted them, our mission statements had alignment. And they have resources, staff, people, urban vision.”
The leadership of both churches began to ask: “What if we could do this together?” says Goossen.
The initial request for WMB to birth the new mission with help from Stevens wasn’t ambitious enough. After months of processing the pros and cons of the merger with the board and the congregation, KMB voted 84 percent in favour of joining WMB. 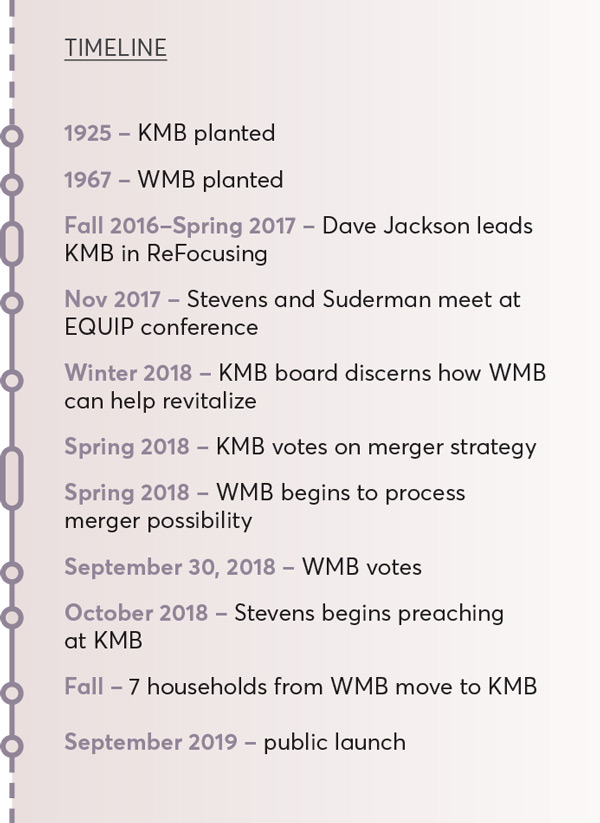 Birth of a partnership

“KMB wanted us to help fulfill revisioning they’d gone through with Dave Jackson,” says Stevens.
It was a similar vision to that of WMB; in fact, “It was their DNA they were realigning with, to begin with,” says Stevens.
Most MB churches in Kitchener -Waterloo – WMB, Glencairn – were planted out of KMB.
“The same things God had called KMB to, God is calling them to again,” says Stevens.
“Lots of members at WMB were discipled as kids at KMB,” says Stevens. Seven households from WMB, including a representative of the board, volunteered to engage as part of the KMB congregation.
“We haven’t needed nursery care [for a while],” says Goossen. With the influx of young families from WMB, “We have wonderful, noisy children running down the aisle to kids’ church, and people lining up for nursery care.”
With tears in their eyes, senior members whisper, “This is how it used to be,” he says.

The AGM where WMB held its vote on the merger “was not a normal business meeting,” says Stevens. Besides the vote – 97 percent in favour – there was a membership renewal. “A lot of people stood and declared a deep faith in God.”
It was a fitting follow-up to the previous year’s 50th anniversary celebration where “God poured an exciting new vision into the church. We celebrated our history, reconciled with the past, and asked for forgiveness,” says Stevens. “Enlarge the place of your tent,” (Isaiah 54:2) was the theme.
“I think it prepared us to be ready for this moment.”
“We have things to work out; I’m sure there will be bumps, but we’re so humbled by [WMB’s] response,” says Goossen. “It was all humility. All ‘let’s do this together.’”
The congregations meet separately, with campus staff and their own stage teams for worship, but Stevens preaches the same message in both congregations on Sundays.
Change does not come without pain. There was fear of KMB losing their independence; yet independence had not necessarily served the church well.
“I’ve seen people at KMB willing to give things up,” says Goossen.
“There are lots of people in Kitchener-Waterloo who need to see Jesus. Let’s work together. Might this be a way forward to revitalize churches that are struggling?” says Goossen.
“What we experienced has been the body of Christ at its best.”