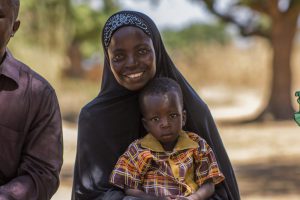 Worldwide there are more than 65 million displaced people—nearly double the population of Canada.

The United Nations says this number is unprecedented and the need for humanitarian assistance is only growing.

The crisis isn’t isolated to one region. People are being displaced all over the world, testing the resources and resilience of populations from Europe to Africa to the Middle East.

Here are some examples of the many ways MCC supports uprooted people: 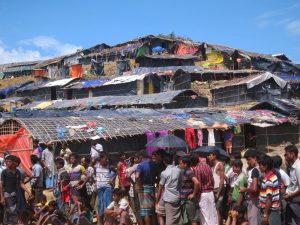 A camp for refugees in Cox’s Bazar, Bangladesh. Photo courtesy of World Renew.

Can you imagine what it would be like if all the people in Prince Edward Island, Newfoundland and Labrador combined, and more, were displaced and forced to migrate to an area one-tenth of the size of Disney World?

This is the case for more than half a million Rohingya people living in Cox’s Bazar in Bangladesh.

MCC is supporting Canadian Foodgrains Bank members who are responding to the needs of Rohingya refugees in Bangladesh, where people have fled extreme violence in Myanmar in search of safety and freedom.

In Cox’s Bazar, MCC is contributing to food distributions which will benefit an estimated 140,000 refugees.

Violence broke out in northern Rakhine state at the end of August when Rohingya militants attacked government forces. According to the United Nations, the Myanmar government responded against the Rohingya with disproportionate violence. Entire villages have been destroyed, and there has been widespread panic and flight.

MCC has ongoing work in Myanmar as well, including supporting the Myanmar Institute of Theology’s Peace Studies Centre. We also support women’s groups that address conflict in their communities and promote equal rights and opportunities for women. 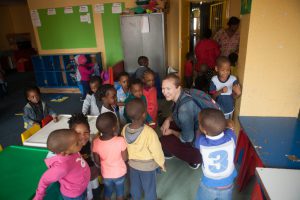 MCC Canada staff writer, Rachel Bergen introduces herself to the children who receive care at the Children’s Care Centre, an MCC partner in Durban, South Africa.
The Children’s Care Centre provides food and care for 124 children; about half of are refugees. The children range in age from just a few months old to 6 years old. A few children who are older stop by after school until their parents can collect them. Children eat, sleep, play and learn at the centre. It’s run by the Union of Refugee Women, an MCC partner.

South Africa is the tenth-largest recipient of asylum seekers and refugees worldwide, but has few services to meet the needs of these people.

MCC partner Refugee Social Services is one such organization, and it’s staff work to meet more than material needs.

Support groups, such as this one for older refugees in Durban, South Africa, provide a space to build connections, to overcome isolation and to spend time with other refugees in similar circumstances. Having space to share stories and laughter together is especially important for older refugees who are unable to work and may have fewer opportunities to connect with others outside their homes.

In addition to support groups, Refugee Social Services provides emergency food and rent support for newcomers to South Africa, job training and educational opportunities in Durban and Pietermaritzburg. It’s the only organization of its kind in the entire province with a massive refugee population and an even bigger group of asylum seekers. 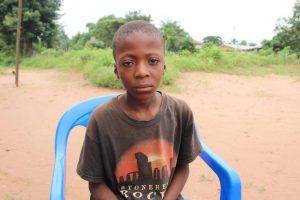 Imagine if the entire population of Saskatchewan and more was displaced due to violence and political unrest.

This nightmare is a reality in the Democratic Republic of the Congo (DR Congo).

About 1.4 million people from the Kasai region in south-central DR Congo have fled ethnic and political violence that erupted in August 2016 between a local militia group, Kamuina Nsapu, and national security forces. Five thousand Mennonites are among those forced from their homes.

There are so few international aid organizations working in the region that families not affected by the violence are hosting displaced people in their homes and sharing what little food they have.

MCC is working with several church groups to provide emergency food and non-food items for hundreds of families in Kasai and Kwilu provinces. The assistance also supports the host families.

According to Fidele Kyanza, who on behalf of Mennonite Central Committee (MCC) helped coordinate one of the distributions, this assistance helps build peace. 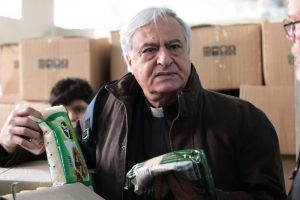 The number of displaced Syrians outnumbers the entire population of Western Canada.

The Forum for Development, Culture and Dialogue (FDCF), an MCC partner, distributes monthly packages of food to 6,000 families in the Qalamoun area, Homs and rural villages around Hama. The packages include items such as rice, pasta, chickpeas, lentils, oil and canned meat. MCC is the only international organization providing relief in some locations in the Qalamoun region. 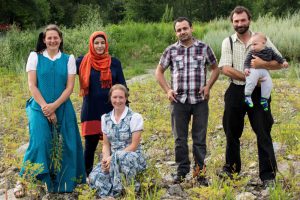 Hutterite members of Green Acres Colony near Wawanesa, Man., along with Enes and Fata Muheljic, a refugee couple who fled from the former Yugoslavia years ago, worked with MCC Canada to sponsor a refugee family from Syria.

“Many years ago our ancestors came as refugees,” reflects Elaine Hofer. “If Canada hadn’t welcomed Hutterite refugees, many of us wouldn’t be here today.”

Rachel Bergen is a staff writer for MCC Canada – Relief, development and peace in the name of Christ.