What's New
Leading through the trauma of covid: Part two...
Ask God which town
Where to from here?
CCMBC National Director attends 2022 ICOMB Summit
MCC Canada and MCC Manitoba sell shared property...
The world appears to be growing darker
Sharing a new and unified language
6 reasons to attend the MWC Global Assembly...
One too many
Just one more
Home Arts & Culture The Steve Bell Journey: tribute to a modern-day troubadour

The Steve Bell Journey: tribute to a modern-day troubadour

If you’re Canadian, you’ve likely at very least sung his “Wings of an Eagle” or had opportunity to attend one of his concerts. For more than two decades, Bell has crisscrossed the country, playing venues large and small, and he’s also performed in the U.S. and places like India, the Philippines and Ireland. But he’s never gotten the name recognition – or airplay – of a star like Michael W. Smith or Steven Curtis Chapman.

Perhaps the two-time Juno Award winner’s successes may be chalked up to his everyman-ness. Director Andrew Wall captured that sense in his footage taken over eight months of touring with Bell. The film traces Bell’s history, inter-cut with moments from his varied concerts, ranging from a Saskatoon church in the winter to a sound stage in Los Angeles.

Bell doesn’t fit anyone’s box. Part of the family ministry band in his childhood, he learned to play guitar by jamming with inmates at the penitentiary where his father was chaplain. He was an established professional musician for years before a discerning acquaintance half-tricked him into playing his first gospel concert. “I was terrified to play in front of a roomful of people actually listening to me,” said Bell, who was accustomed to playing in clubs.

Raised Baptist, he now draws deeply from liturgical traditions. And Bell jokes that, via the Catholic priest who created opportunities for him, his first album was “financed by the Vatican.” 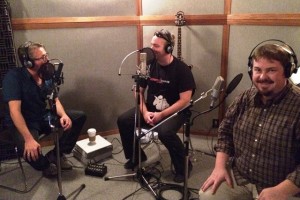 Wall’s takes of roads, set ups, practices, and concerts gives the viewer a taste of a touring musician’s life, and his ambient footage locates the feature in real places. This Winnipeg viewer saw her own love of her city reflected in his editing choices.

That the Prairie city had a presence in the feature was appropriate. At a pre-launch screening, Bell observed that Winnipeg has a supportive arts scene like no other where the collaborative spirit extends into the business community. It may that the Steve Bell phenomenon could only have come out of Winnipeg, local radio host Kyle Rudge mused.

Unfortunately, the film’s meandering arc, though suited to Bell’s own storytelling style, seemed a tad unfocussed. The Bell fan may cherish every glimpse into the singer songwriter’s life, but for others, the minutes may grow long.

Ironically, the tone is overwhelmingly upbeat (especially as it treats the series of symphony concerts), despite the question that frames the film. Yet, it is Bell’s willingness to explore longing and suffering – producer Roy Salmond observes he doesn’t major in triumphant themes like most Christian artists – that makes his songwriting and concerts so powerful.

Effusive praise from diverse interviewees – from a Texan Christian radio host to pastors and musicians to a former Billboard & Rolling Stone writer who commend both Bell’s lyrics (“they have a depth”) and his guitar-playing (“one of the best in the world”) – stand in contrast to Bell’s unpretentiousness. Those who attend his concerts taste his brilliance and his modest sincerity. Here’s a man whose street-side conversation about guitar-playing ends with Bell climbing onto a city bus bearing his own image on a concert ad.

And therein may lie the answer to the mystery the film names but doesn’t explicitly untangle.

Perhaps Steve Bell never made it big because then he wouldn’t be Steve Bell: a joy-filled, impish troubadour who teaches us to look for beauty, savour mystery and speak frankly about loss and pain.

Daughters in the City