What's New
Through the conflict, life carries on in Ukraine
A FOCUS on Mission
Must Patience Be So Slow?
Harold Jantz: A Heart for the Mennonite Story
Lorlie Barkman: A Life of Creative Engagement
Last Days, First Days
Women in Ministry: Bertha Dyck
January Moment in Prayer “Holy Spirit—Fill Us!”
The Church as the Patient Body of Christ
Advent: Making Much of Jesus: Christmas Day
Home Arts & Culture A flood of presuppositions 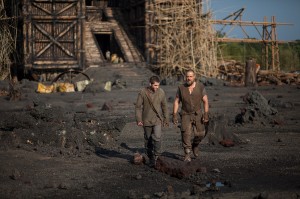 It is with curiosity and humility that we should view Darren Aronofsky’s Noah, willing to ask questions about our own understanding of God.

Hollywood’s telling of the story of Noah explores humanity’s understanding of their creator. The filmmaker’s assumptions about God’s character lead the viewer astray from a true understanding of the God of Creation, yet as in life itself, God uses flawed and broken people and situations to reach those who seek him.

It’s important to know what the film is not. Noah is not a literal re-telling of Genesis 6–9 story as Bible-readers know it. In moviemaker parlance, “based on …” gives a level of creative license to interpret the source text – in this case, the story of Noah. Curiously, it has moments of near-literal representation (albeit with some creative liberties), yet in elements, the script forges an alternate storyline.

As one would expect with a big-budget, Hollywood-style movie, Noah has some very compelling visuals that aid the modern-day reader of Genesis by challenging the picture developed in the mind’s eye and stretching the imagination. For instance, the stark, barren landscape epitomizing the cursed land of Cain (Genesis 4:11–12) and desperate humanity is later miraculously transformed (in stunning CG fashion) into a lush forest showing the perfection that was the Garden of Eden.

To portray the largest theme in the story – the Fall and humanity’s descent into wickedness – no visual or literary method was left unexplored. The moral decline and the sin of the descendants of Cain is portrayed or implied quite graphically in acts of violence and oppression, intense enough at times to make me question the PG-13 rating. As a community, the people in this film have moments of unity in their pursuit of survival as they live out the consequence for their sin, yet ultimately their harmony breaks down into survival of the fittest, “kill or be killed.” The barren and depleted landscape bears the marks of their unchecked greed and consumption serving as a strong illustration of the balance that was lost in the fall.

The filmmakers take greatest liberties with their depiction of God. Aside from sharp deviation from the divine character in Genesis, this depiction is actually a window into our generation’s view of God. More than plot interjections to move the story along: sorcery, fallen angels (an interpretation of the Nephilim) and a seed from the garden of Eden limit God’s interaction in the actual events.

This narrative shows God as the Creator of the universe (albeit through time-lapsed evolutionary lens), but he is completely silent, only returning to creation with judgment and destruction. God communicates that task to Noah through a vision, but leaves Noah to interpret the dream himself.

Noah is portrayed with a keen eye for discernment, able to identify the areas of character weakness, even in his own family. This portrayal is in keeping with the “righteous man” we read of in Genesis 6:9, “blameless among the people of his time.” However, where that same verse describes Noah as walking in close fellowship with God, following the precise instructions and covenant that God outlines for Noah and his family in Genesis 6:14-22, the filmmakers instead leave Noah to interpret the dream on his own. He concludes that God instead wants creation without people (Noah and family included).

The ultimate survival of the human race is painted with a humanist brush where Noah is to restore the creation to perfection – without humans. When Noah cannot complete this task, his wife concludes, “He asked you to decide if we deserve mercy.” This scenario is far from the covenant promise God had laid out with Noah and his family in Scripture.

It shouldn’t be a surprise that the world has such a distorted view of the character of God. The filmmakers accomplished more than depicting the wickedness of the generation annihilated by the flood. By graphically exploring the human condition from good to evil, righteous to wickedness, they expose their own presuppositions about who God is. This was best embodied by the villainous character of Tubal-Cain, screaming up to the heavens, “I am man, made in your image, I give life, I take life away, as you do…. This rain is meant to wipe us from the face of this world, but we are men and we decide if we live or die, and men united are invincible.”

Darryl Bueckert is a photographer, pedorthist and serial entrepreneur living in Langley, B.C., with his wife Jodi and children Emily and Ben. They attend Jericho Ridge Community Church. As a family they are preparing to embark on a humanitarian ministry in Central Mexico, splitting the year between both locales.