What's New
Delete or not to delete, that is the...
Believers bring water for drought baptism
Encouragement to those in the arena
Keeping attention and making an impact: A few...
Open hands to reconciliation
From the editor
Approaching truth and reconciliation with love in our...
MB Seminary offers new MA in Transformational Leadership...
Multiply August Ukraine Updates
Book Review of Return Stroke: Essays & Memoir...
Home MB HeraldFeatures Radiating the risen Christ 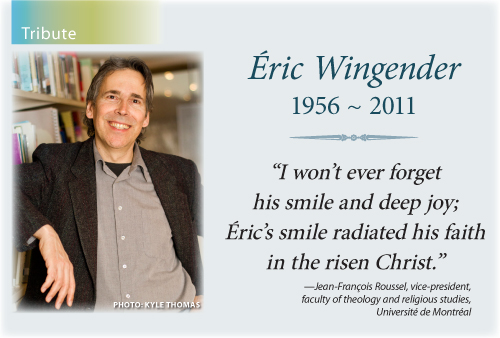 Éric Wingender died suddenly Oct. 5, 2011, after suffering a massive heart attack. He was born Nov. 22, 1956, in St-Eustache, Que., to Noël Wingender and Madeleine L’Heureux. He was married to Farrah-Chanel (Paulette) Taylor, with whom he raised three boys, Jean-François, Sydney, and Spencer.

Éric’s first roles were professor and registrar. Having obtained a master’s degree through MB Biblical Seminary, Éric soon accepted the responsibility of leading the school. It was under his leadership that IBL became ETEM and moved closer to the University of Montreal – a partnership established in 1990. Éric’s students and the school benefitted greatly from the close collaboration he established between the faculty of theology and religious sciences (FTSR) of the University of Montreal and ETEM.

Éric’s dream was to see evangelical institutions within the province move beyond their differences to contribute to a common theological education project. Under his direction, ETEM developed a partnership with IBVIE, the school of theology of the Christian and Missionary Alliance Churches. And earlier this year, Éric, always the visionary, began the process of creating a new partnership with Laval University.

Éric was also assistant editor of the MB French-language magazine Le Lien, and due to his leadership, its mandate was broadened to serve all French-speaking evangelicals in Quebec.

He was a great man, known for his gentleness of spirit, his humility, openness, and compassion – a dear brother, mentor, friend…. Éric leaves a gaping hole for us; we will miss him terribly.”

Éric’s understanding of Anabaptist theology as well as his first-hand knowledge of Quebec culture enabled him to powerfully impact that province for the gospel. His charismatic personality and compelling sermons left an unforgettable impression.”

Éric was intellectually gifted. Formally educated in science, exegesis, and theology, he read extensively in all these fields. He was well aware of major societal trends, drawing daily on a wide range of local, national, and international newspapers.”

With such a man at the head of ETEM, how could IBVIE resist the invitation of Mr. Wingender to think about partnership? When the kingdom comes first, when all that matters is being good and faithful servants, when that which we urge is the love of Christ for Quebec, how could we not come closer?”—Jean Martin, director, IBVIE; academic dean, ETEM

For the faculty, Éric Wingender was a friend, a builder…. The most beautiful thing is that this project [the partnership between ETEM and the University of Montreal] had become not just the joining of two projects, but a common cause. Losing Éric, we lost one of ours.”—Jean-François Roussel

Éric loved intellectual challenges. He was also gifted with a great sense of communication. He was as interesting to joke around with as to listen to giving a public presentation.”

Many University of Montreal students who needed a religion course to complete their credits attended ETEM…. They came into contact with Éric and discovered a relevant path to Jesus Christ.”

Testimony: From coat sale to clothed in Christ