What's New
Boldly advancing the gospel from our knees
MCC sends food and relief to Cubans in...
Robert Dagenais, pastor of the Sainte-Thérèse church, is...
More donated hay needed to help farmers in...
“God’s time was perfect”
Hope and pray every day
Resilient Leadership: The gift of self care
Project Redemption
Blue Christmas
“Repent, for the kingdom of heaven is near.”
Home Life & Faithfeature articles Gap year for God

The risk, prayer and faith of discipleship programs


The “gap year” – when a young person takes time to travel and experience new things during the period between graduating high school and starting university – has been an established rite of passage for Europeans for decades and is increasing in popularity among Canadians. Mennonite Brethren schools in Canada offer programs that give young people the new experiences and friendship-building opportunities of a gap year under the parent-reassuring guidance of mentors and teachers, in programs designed to foster faith development. Participants in MB colleges’ discipleship programs aren’t just finding themselves and making lifelong friendships; they’re building their relationship with God.

God in the stillness 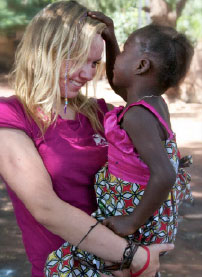 More than 10 years ago, Canadian Mennonite University launched a School of Discipleship, later renamed Outtatown: an eight-month program of instruction, service, travel and experiential learning with the purpose of awakening youth to radical faith in Jesus. The four-month French Africa track was added in 2011.

Cecely Doerksen knew she was headed to CMU (where her father is a professor) after high school, but “I needed a break from school [after Grade 12],” she says. CMU’s Outtatown French Africa program fit the bill.

Starting in Winnipeg’s French Quarter, the group spent time with hosts in Quebec City and Montreal, retreated to Camp Peniel, spent several weeks in Burkina Faso, West Africa, seeing all parts of the country before heading to Paris, then wrapping up in the Taizé community in Burgundy, France. The word hectic could be applied to the four-month program, but it taught Doerksen to slow down.

“We often go at God with requests in our prayers,” she says, but “my perspective changed to listen and be quiet.” That listening went beyond hearing: “You don’t have to understand [what others are saying], and you can still feel God just as much.”

Living in close quarters with fellow students where there was no chance to “turn on” image management, “I learned about my strengths and weaknesses,” Doerksen says, and she learned to appreciate the support and accountability of the team.

The group encouraged each other as they encountered grinding poverty, openly shared their faith stories, learned to see the world through the eyes of people with a different set of problems and confronted their own idols. A talented musician, Doerksen fasted from music for a time while she struggled to reconcile her greatest avenue of worship with her greatest temptation to make things about herself.

Doerksen also learned about interdependence in the body of Christ, especially in Burkina Faso where the small minority Christian Mennonite churches “were super-dependent on each other” as they worked to build the kingdom of God together.

And Doerksen learned that dependence on God “is crucial.” There were moments when everything was out of their control; the only thing they could do was “give it to God…. It’s humbling.”

But it wasn’t always tough. After hiking to a waterfall in Burkina Faso with “the most breathtaking view,” the team was deluged by a warm rainstorm. “I stretched out my hand,” she said, and in that moment, “I have never been more certain that God is real. It was one of the best moments of my life.”

The newest in Columbia Bible College’s suite of one-year programs, Praxis is designed for students who are socially minded, artistically inclined and culturally engaged. With a focus on the integration of faith, community and culture in urban settings, the program includes a 10-day trip to New York City. 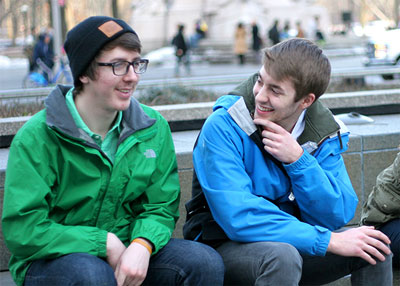 Jesse Zak (r) in conversation with a Praxis teammate

“I have been around Christianity my whole life, but it wasn’t that real for me until I went to Pines Bible Camp,” says Jesse Zak. “After that, I started taking my faith much more seriously.”

After graduating from high school, the next step for this pastor’s son was Bible school, Columbia Bible College, to be specific, where he was directed to the brand-new Praxis program as a good fit for his personality. “In-class learning is important, but I was really looking for the community aspect,” he says.

He found that – and more. Learning both about and in cities in the loving embrace of the Praxis community, Zak is becoming less “intimidated by a bunch of people.”

Evangelism “is a smoother conversation than I thought it would be. I always thought evangelism was going up to people and showing them the Bible,” says Zak. “Praxis has taught me to get to know people, and invest in them, and once I do, there’s trust. Then I can ask them about faith.”

Before coming to Columbia, Zak “didn’t think I was much of a pray-er.” But now, having learned there are lots of different ways to pray, “not just dry stuff,” he’s “realized how beneficial prayer is” not only in his personal life but also in ministry. “It’s something that can really break lots of barriers. My prayer life has increased significantly since I’ve come here. I’ve realized how much power prayer has and how underused it is within Christian society today.”

Prayer has girded Zak as he is thrown into new roles where he has had to let go of fear of what others think while also becoming aware of his responsibility as a leader: someone others may look up to.

“I want to live a Christian life, I want to be set apart from people, I don’t want to just blend in. I want to demonstrate what being a Christian is like.”

“I’ve turned over a new leaf since coming here. Praxis and CBC have played a huge role in me developing into the person I am today.”

In its second year, Expérience 19/24 at (ETEM) takes students through several months of team-building, classroom instruction and city exploration, followed by a local church internship, then an international mission experience.

Newly graduated RN Andie Joseph had only one year of studies left to receive her bachelor of nursing certification, but she thought, “Maybe I should take some time, do some experience with God.”

Because her father is a pastor and church planter, Joseph had always been involved in church and was baptized at 15, declaring her faith her own. But the Haitian immigrant to Montreal “felt lost for a few months” after her mother died of cancer in 2012. She couldn’t pray and was questioning why God allowed things to happen as they did.

Enter ETEM’s Expérience 19/24. The four students in the 2013–2014 year are a close-knit group supported by the teachers and mentors in not only learning about their theology but practising their faith.

Following several months of learning together, Joseph interned in her church, Assemblée de Grace, with the children’s and youth ministries, and will complete the program with international mission, likely to North Africa with MB Mission, in summer.

“When you go to church you listen to the preacher and you get the message,” she says, but “when you have to practise it yourself, getting [the Word of God] involved in your life – that’s changing me.” She’s begun regularly meditating through prayer and reading the Bible for transformation – not only on her own, but also with her family.

“I’m learning a lot about God, about his holiness,” she says. Discovery has also come through fellow students and the people at her church. “You’re learning by hearing other people; your faith grows when you hear stories about what other people experience with God.”

Building a stronger base of theological understanding and deeper relationship with God has given her more boldness in taking risks and sharing her faith. Through Expérience 19/24, she’s learning to “bring the gospel everywhere I go.”

“I always had the heart to become a missionary,” she says. With her nursing skills and desire to minister the gospel, she feels called “not only [to] care for people in a medical perspective but also in a spiritual perspective.”

“It’s one of the best decisions I ever made,” says Joseph of signing up for Expérience 19/24. “It helped me a lot.”