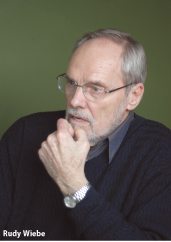 CMU President Dr. Cheryl Pauls will present the award to Wiebe on Thursday, April 4, 2019, at Spring at CMU, an annual fundraiser in support of the university.

The CMU PAX Award was created to honour people who lead exemplary lives of service, leadership, and reconciliation in church and society.

Wiebe has published 33 books and is a two-time recipient of the Governor General’s Award for Fiction. He is best known for his novels that focus on faith, life on the Canadian prairies, and the voices of Canada’s Indigenous peoples.

“Rudy Wiebe is a cherished and highly celebrated writer,” Pauls says. “His works have been critical in exposing societal concerns, and in nurturing empathy and understanding on complex matters.”

Wiebe says he is delighted and honoured to receive the award and be placed in the company of previous recipients like Jean Vanier and Art DeFehr.

His first novel, Peace Shall Destroy Many, caused controversy in the Mennonite world when it was published in 1962, because of its uncomfortably honest insider perspective on the community.

“The award is called pax—peace. Well, 57 years ago my first novel Peace Shall Destroy Many was published,” he says. “It ‘destroyed the peace’ of so many readers that I have never been able to stop writing, not for the rest of my life.”

He proceeded to study and then teach at Mennonite Brethren Bible College, one of CMU’s predecessor colleges, and worked as editor of the Mennonite Brethren Herald in Winnipeg. He also taught at Goshen College in Indiana before settling in a position at the University of Alberta, where he is currently professor emeritus.

In addition to winning numerous awards for his writing, Wiebe has lectured and given readings internationally, taught literature and creative writing for 30 years, and mentored now successful writers. He was made an Officer of the Order of Canada in 2000.

“Wiebe’s novels draw admirably on the character and tenets of the Mennonite faith tradition,” Pauls says. “His writing demonstrates the gift of the imagination of the church in delightful and astonishing ways.”

Spring at CMU is an event of story, song, and food in support of CMU. This is the fifth year that CMU will hand out the PAX Award.

Visit cmu.ca/springatcmu for more information about the event and past PAX Award recipients.