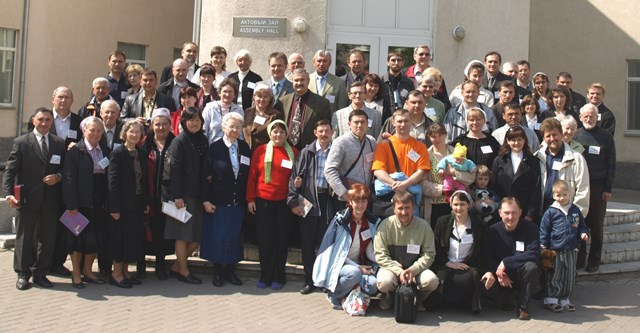 Logos supports education for church planting pastors in the FSU.

Logos replants the gospel in the former Soviet Union

“Glasnost” (openness), “perestroika” (restructuring): these words of the 1980s stirred the hearts of many Mennonites in Canada and brought hope to countless citizens of the Soviet Union. People with family roots in Russia, Ukraine, Lithuania and other Soviet republics witnessed the last days of the USSR with a yearning to bring the gospel back to their parents’ homeland.

It was a new day as 70 years of Communism came to an end. 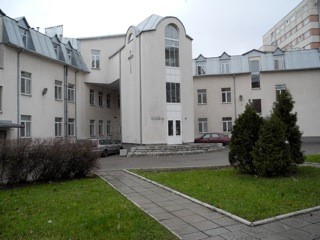 The new words sparked formation of a new ministry to answer that gospel hunger. Logos International formed in Germany in the 1985; visionary Johannes Reimer, a Mennonite emigrant from the USSR to Germany, brought the dream to Canada where it has flourished for 25 years.

The time was right, they decided, to make plans and start Canadian Christians on a pathway to provide Bible training by correspondence. Within a month, they had incorporated Logos Canada with a vision to raise up and educate new leaders who would in turn call out and train others – indigenous replanters of the Word in the former USSR. 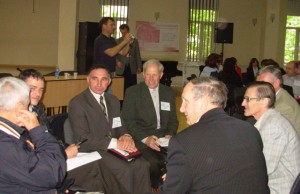 Pastors gather to learn and be encouraged at a conference.

These Logos Canada pioneers agreed they should partner with people sharing a similar passion, like Dave and Elfrieda Loewen of Winnipeg, who had begun a camping ministry in the former Soviet Union. And Logos would work with Russian Baptist churches.

From the beginning, the vision has been for local and collaborative ministry. “We are not sending, we are facilitating,” says board member James Nikkel.

Prior to perestroika, Logos Germany had been educating home-study students in the underground church since 1985, utilizing instructors in North America and Germany. The first bricks-and-mortar school, on the site of a former Soviet camp and collective farm near Belorechensk, northeast of the Black Sea, opened in 1990 with 45 students.

But Reimer’s was for a Christian university in the heart of the region: a dreamed realized in 1992 when classes opened at St. Petersburg Christian University, thanks to Logos Canada and other supporters.

Canadian board members were pleased by the impact the school is having on the local church. “It was encouraging to find a thriving young church of 250 members made up mostly of recent converts,” Stobbe wrote after a 2007 visit to a Volvograd church pastored by a SPCU graduate. “Some of [the members] are involved in starting new home groups, leading Bible studies and teaching seminars.” 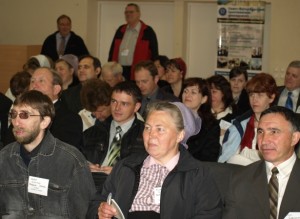 In 2014, the work has shifted. SPCU is still a major piece of Logos Canada’s work. But, faced by inflationary costs and regionalized training, its role has changed. Stobbe says the site is also used as a convention centre and hotel, and the revenue is used to train leaders.

Logos Canada also funds indigenous missionaries and evangelists, medical and humanitarian initiatives and summer camps. Because of economics, political changes and militant Islamic groups in some regions, there is a new sense of urgency.

“We need to raise more funds,” says board member Henry Friesen, who translates the missionaries’ letters. “They could do more if we supported them more.”

Most Logos Canada supporters are Mennonite Brethren in Western Canada. Directors want to spread the word to include more people in the outreach, moving forward into the second quarter century. A Sept. 20, 2014, Logos Canada dessert night will celebrate 25 years of financial and prayer support for “replanting” the gospel in Communism’s barren swath.