What's New
Through the conflict, life carries on in Ukraine
A FOCUS on Mission
Must Patience Be So Slow?
Harold Jantz: A Heart for the Mennonite Story
Lorlie Barkman: A Life of Creative Engagement
Last Days, First Days
Women in Ministry: Bertha Dyck
January Moment in Prayer “Holy Spirit—Fill Us!”
The Church as the Patient Body of Christ
Advent: Making Much of Jesus: Christmas Day
Home News Mennonite witness amid suffering and hope in Ukraine

This former Mennonite school served 130 hearing- and speech-impaired children at Tiege in the Molotschna region. When the German army swept through Ukraine, soldiers took the students out to a field and shot them. Photo: J. Nelson Kraybill

In a region of Ukraine that thousands of Mennonites left generations ago, two dozen of today’s Mennonite leaders from across Europe gathered for three days of fellowship in October 2018. Hosted by Ukrainian leaders from Mennonite Brethren churches, meetings in the city of Zaporizhzhia included participants from Portugal, Spain, France, Netherlands, Germany, Switzerland, Austria, Lithuania and Ukraine.

Few descendants of German-speaking Mennonites who once established more than 400 villages remain in Ukraine today.

Mennonites moved to Ukraine from Prussia starting in 1789 at the invitation of Catherine the Great. These German-speaking Anabaptists established successful farms, businesses and agencies. They began to leave in the 1870s when the Russian government withdrew conscientious objector status – and farmland became available in North America.

The 20th century brought severe hardship for those who remained in Ukraine – from anti-landowner violence during the Bolshevik revolution, to confiscation of land, executions by the Stalinist government and deportation to Siberia.

Today, many towns established by Mennonites are sparsely populated, poor and dilapidated. Residents often know nothing of who built the villages.

Meanwhile, in Western Europe and North America, descendants of Mennonite refugees from Ukraine are reassessing their own history. Mennonite history reveals there was both heroic, peaceful witness in the face of evil, and, in some cases, mistreatment of Ukrainian employees. Additionally, some Mennonite villages took up arms to resist marauding gangs during the post-Revolution chaos.

In front of the oldest standing Mennonite Brethren church building in the world (now a warehouse), Johann Matthies, MB Mission Europe Director, explained that sharing the gospel with other Ukrainians was forbidden in those days. One Mennonite who bought Bibles to distribute was excommunicated, Matthies said.

During their heyday, Mennonites in Ukraine built hospitals and schools that served more than themselves, and brought up-to-date farming practices to the region.

Since 2007, MB Mission has partnered with Ukrainian people to establish new Anabaptist congregations. At Heart of Christ MB congregation in the port city of Berdyansk, several visiting European Mennonites participated in Sunday worship. The congregation of 60 Ukrainians is youthful. 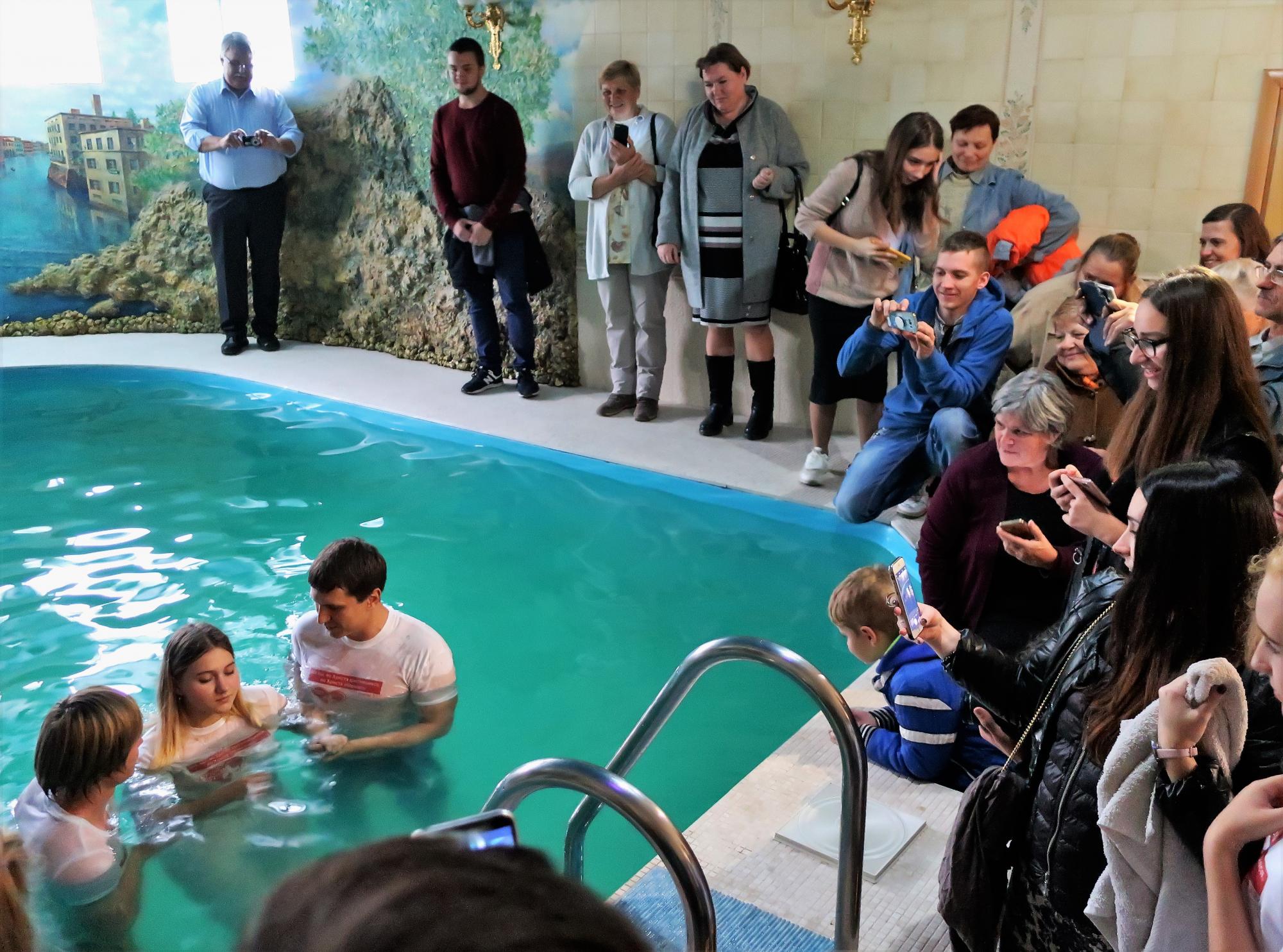 Seven women ages 16-22 were baptized at a nearby pool the day the European leaders visited. Photo: J. Nelson Kraybill

Less than 100 miles to the east lies the front lines of Russian occupation of Ukrainian provinces Crimea and Donetsk. Weekly, pastor Alexey Yuditsenko joins Pentecostal pastor Albert Xomiak to carry in food, clothing and Bibles, and show the love of Jesus. They report that the economy is devastated, and there are widespread problems of poverty, alcoholism, depression and unemployment.

Yuditsenko and his congregation have vision for thousands coming to know Christ. On the wall of their rented meeting space hang reproductions of paintings depicting Bible stories. Church members take these out to city parks and invite passersby to comment on what they think is happening in the picture. This gives opportunity to share the gospel.

In the midst of war and economic stress, God again is raising Anabaptist witness in Ukraine. Where thousands of German-speaking Mennonites once settled and then fled, Ukrainian and Russian spiritual descendants are guiding the church to rebirth.

You might be interested in hearing this audio interview with Johann Matthies highlighting the history of MBs in Ukraine and what God is doing there today. https://willingdon.org/wom-podcast?audio=5535