What's New
Delete or not to delete, that is the...
Believers bring water for drought baptism
Encouragement to those in the arena
Keeping attention and making an impact: A few...
Open hands to reconciliation
From the editor
Approaching truth and reconciliation with love in our...
MB Seminary offers new MA in Transformational Leadership...
Multiply August Ukraine Updates
Book Review of Return Stroke: Essays & Memoir...
Home News Mennonite Brethren leaders meet 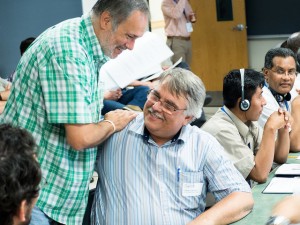 Jose Arrais of Portugal and Walter Jakobeit of Germany greet each other.

Representatives from 21 of the 22 national Mennonite Brethren conferences from around the globe met for the International Community of Mennonite Brethren (ICOMB) annual summit held July 26–29, 2015, at Messiah College in Mechanicsburg, Pa., following the Mennonite World Conference Assembly in neighbouring Harrisburg.

The 2015 summit highlighted ways in which the 25-year-old organization has grown and is shifting beyond fellowship to providing guidance and accountability to its member conferences. However, the country reports that punctuate each session remain a highpoint.

The mutual support these leaders derive from each other is evident as they huddle to pray after sharing the pain of ministering to war-torn Ukraine or the excitement of turning a brothel into an outreach center for former prostitutes in Brazil. The sharing culminates in the closing footwashing, prayer and communion service, a highlight for many delegates. 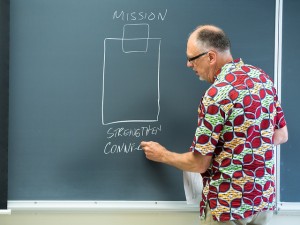 ICOMB representatives voted unanimously to appoint David Wiebe of Canada – ICOMB’s first full-time executive director – to a second three-year term. Representatives strongly affirmed Wiebe’s leadership, only cautioning against overwork. “When Dave visits us, he is so tall but so humble,” said Yoshifuma Tanaka of the Japan MB Conference.

Delegates raised concerns about the importance of building trust and acknowledged that conferences do not “do church” in the same way. They suggested ICOMB serve as a mediator rather than an authority figure in times of conflict and pursue a biblical model for sharing authority and resolving conflict.

“We should not be discouraged when we don’t find easy answers,” said Victor Wall of Paraguay. 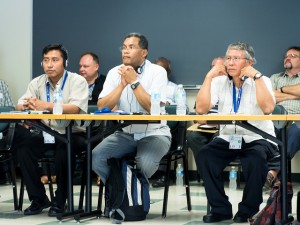 ICOMB conferences in Angola, India and Mexico are currently navigating internal conflicts. Wiebe said ICOMB is testing ways it can support and guide the national conferences as they seek to resolve differences.

“Mission can’t entirely hold us together,” said Wiebe. “Community and identity are also very important, and sometimes ICOMB is asked to have a stronger voice.”

ICOMB exercised that voice during the 2015 summit. The executive committee determined that, in spite of reconciliation efforts, the current leaders of Igreja Evangélica dos Irmãos Menonitas en Angola (Angolan Mennonite Brethren church) were no longer in good standing with ICOMB. Wiebe emphasized that the problem is with specific leaders and not the Angola conference; he asked delegates to pray for the conference and their leaders.

The 2015 ICOMB summit followed the Mennonite World Conference (MWC) assembly held July 21–26, 2015, in nearby Harrisburg, Pa. Most ICOMB delegates also attended Assembly 16 and the general council, mission or education meetings held prior to the assembly.

Building on its experience holding education consultations in DR Congo in 2009 and internationally in 2007 and 2011, ICOMB helped to organize a global education conference for primary and secondary educators prior to the MWC assembly.

During the summit, Victor Wall, ICOMB’s education facilitator, reported on the education conference and other ICOMB education projects. 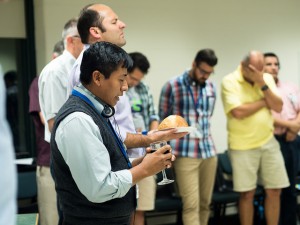 Saúl Yovera of Peru prays for the cup during Communion.

The ICOMB summit began with a worship service attended by international Mennonite Brethren participants from the MWC assembly, some of who remained as guests for the meetings.

In other business, ICOMB delegates received a report from the executive committee that outlined current ICOMB financial accountability policies, recommended that ICOMB members that are not members of Mennonite World Conference “consider MWC membership on its own merits,” and that guidelines on a sabbatical policy for pastors and national church leaders are being developed.

The summit agenda included two seminars. USMB delegate Ed Boschman focused on the character of a leader. Wiebe outlined the essentials of a healthy conference.

Wiebe reported that ICOMB’s 2016 annual summit will be held in Panama. MB Mission will work with ICOMB to host a mission and prayer consultation in 2017, likely in Thailand.

Connie Faber is editor of the Christian Leader, the USMB publication. 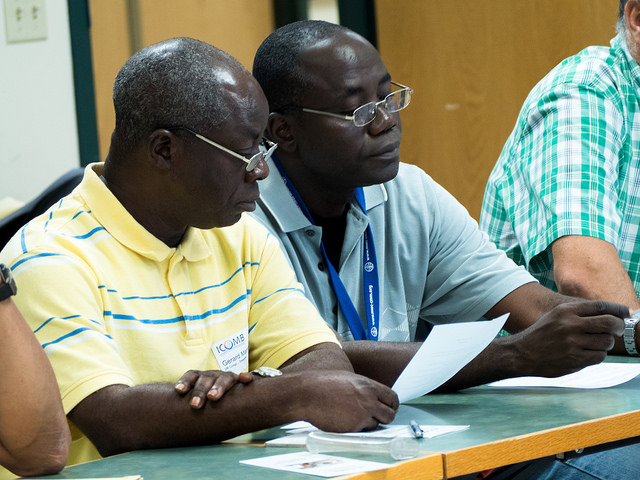 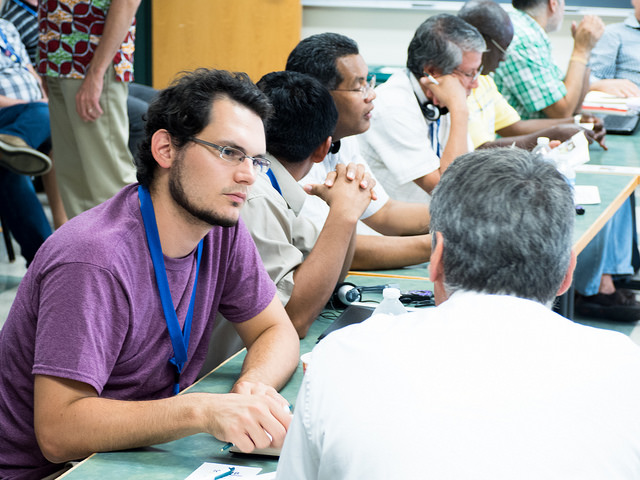 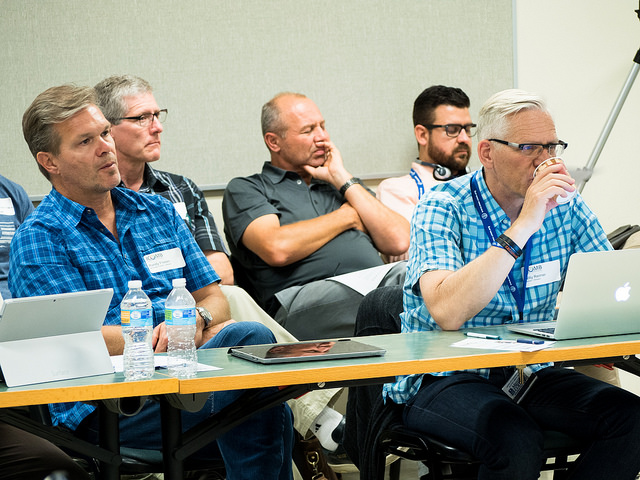 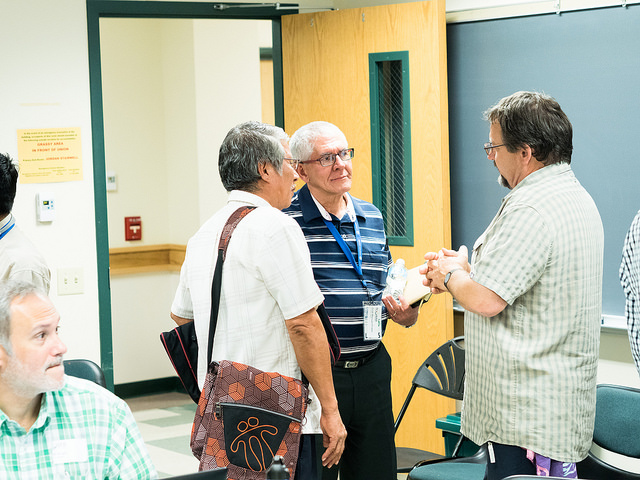 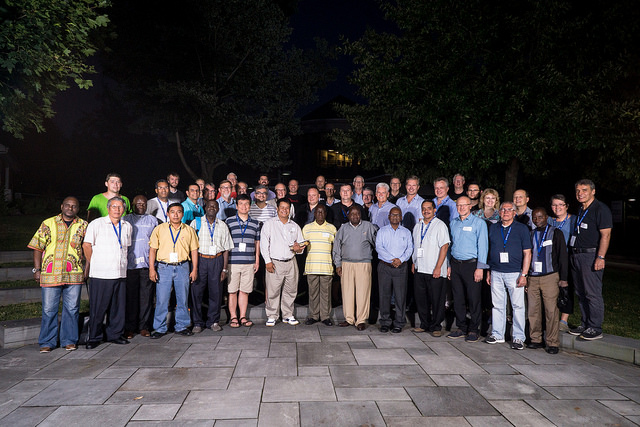 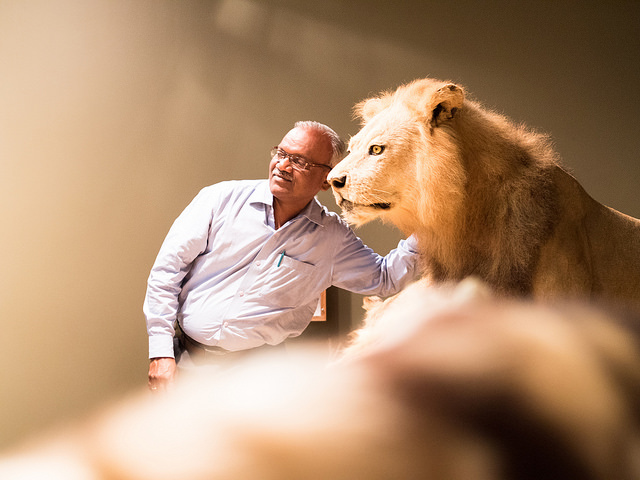 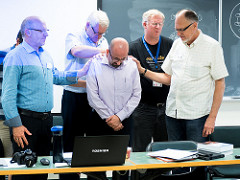 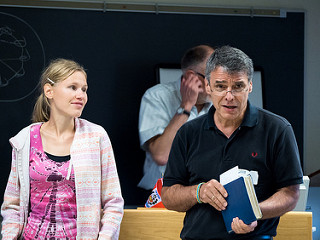