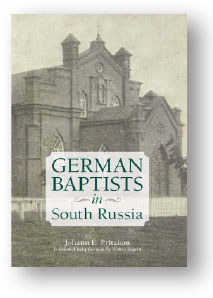 It is often counterintuitive to think that the study of historical documents will lead to new insights. When it does happen, the serendipity is felt particularly deeply. I personally felt a sort of homecoming when I read Johann Pritzkau’s chronicle of German Baptist origins in the colonies of southern Russia (Ukraine).

The Baptist denomination in which I spent a good many years, has roots in the revivals that precipitated the rise of a new Baptist movement in Russia, and the surprisingly close relationship between Baptists and Mennonite Brethren cannot help but be of note to students of MB denominational history.

Pritzkau’s account also clarifies some Mennonite Brethren theological origins in a way that may lead to a somewhat revised understanding of the theological identity of the young MB movement.

German colonization in southern Russia was not restricted to Mennonite settlers; Johann Pritzkau (1842–1924) was from a predominantly Lutheran colony in Alt-Danzig, some 200 km west of the Mennonite colony of Chortitza. Converted in the 1860s, Pritzkau eventually became the pastor of the Baptist church in Alt-Danzig and was commissioned to write a chronicle of this particular Baptist denomination.

Although his work was published in 1914, it had never been translated into English until this new Kindred edition was completed.

As a historical document, it tends toward hagiography, but it provides valuable perspective into both the origin of this German Baptist movement and the early identity and mission of the Mennonite Brethren leaders who were instrumental in its genesis.

Much of the book tells the tale of persecution at the hands of Lutheran and Catholic authorities who strongly opposed the evangelistic message Baptists were proclaiming among them, and chronicles – sometimes uncritically – the triumphs of zealous Baptist leaders who were eager to see fellow community members come to vital Christian faith.

The book shows the manner in which evangelical Christianity brought together disparate groups, cutting across denominational, linguistic and cultural lines to incline Christians to cooperate in mission work. Theological differences over matters such as baptism and nonresistance, though significant, were not enough to prevent cooperation in gospel witness, and different groups demonstrated interdependence along the way.

In this vein, Pritzkau notes with gratitude that it was a pair of (unnamed) Mennonite Brethren ministers who introduced believers baptism by immersion to German immigrants in the village of Neu-Danzig in 1864, leading to a biblical investigation of biblical baptism that culminated in the establishment of the Baptist church in Russia. The missionary work of early MB leaders birthed an entire denomination.

This is an exciting discovery; however, it has a shadow side. Although Mennonite Brethren missionary activity was extending into communities outside the Mennonite colonies, the willingness to formally accept the consequences of this activity lagged behind the missionary zeal of the workers.

In some places, new converts were baptized and incorporated into existing Mennonite Brethren churches. Elsewhere, Mennonite Brethren leaders did evangelistic work, contributed to early Bible schools that resourced new churches, and even helped establish churches and provide leadership for them.

In 1871, a new German Baptist Association was formed. Although Baptists held joint conferences with Mennonite Brethren and shared very similar confessional commitments, ethnicity and legal standing were allowed to dictate that a new denomination needed to be born in order not to threaten the existing one.

Pritzkau notes three main parties within the Mennonite Brethren – those theologically committed to nonresistance, those desiring simply to preserve the Privilegium, and those who saw a legitimate place for military service.

The group that became the German Baptists in Russia had not investigated the matter previously, and now was presented with a theological decision point. Having been directed toward Baptist connections, they looked to Baptist resources and settled on the position outlined in the Baptist Confession of Faith.

Had circumstances unfolded differently, the Mennonite Brethren community could have grown rapidly, and MB identity could have developed in a significantly different direction.

Those who valued collaboration between MBs and Baptists found that some developments in the Mennonite Brethren community served as a cautionary tale to leaders such as Johann Pritzkau.

The later stages of the early fractious behavior were still unfolding when Pritzkau, part of a delegation of seven leaders seeking teaching and organization for their community, travelled to Einlage to meet Mennonite Brethren leaders there. Encountering disorder and conflict, the members of the delegation found no resources and instead tried unsuccessfully to bring reconciliation among the Mennonite Brethren.

Although this encounter seemed painful, it may have inadvertently strengthened the fledgling Baptist community by forcing it to develop more independently.

In sum, this book is a surprisingly fruitful historical artifact that will prove useful to readers seeking a fuller perspective on both the early Baptist and Mennonite Brethren communities in Russia. Understood as a snapshot of the churches in the late 1800s, it offers a valuable firsthand perspective, and will be a worthwhile addition to many a library.

Freely, we have received

Surely Goodness and Mercy Followed Me

Board of faith and life report, fall 2014

10 steps for expressing the gospel as good...