What's New
A FOCUS on Mission
Must Patience Be So Slow?
Harold Jantz: A Heart for the Mennonite Story
Lorlie Barkman: A Life of Creative Engagement
Last Days, First Days
Women in Ministry: Bertha Dyck
January Moment in Prayer “Holy Spirit—Fill Us!”
The Church as the Patient Body of Christ
Advent: Making Much of Jesus: Christmas Day
Advent: Making Much of Jesus: Fourth Advent
Home Arts & Culture 10 steps for expressing the gospel as good news

10 steps for expressing the gospel as good news 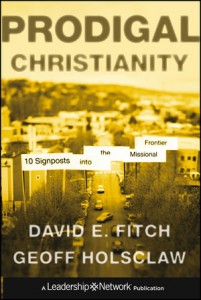 When I first read the title, I expected a diatribe itemizing all that is wrong with contemporary Christianity. I was wrong. Fitch and Holsclaw strike a moderate, peaceable tone.

Rather than criticize what is wrong with the church, the authors capitalize on what the church says and does well. The book presents their proposal for church mission – one that is theologically well rounded without glossing over legitimate theological diversity.

The overarching motif for this book comes from Karl Barth’s suggestion that the parable be read alongside the story of the Incarnation. Even as Christ “travelled across all boundaries into ‘the far country’ of sin and death,” Christian mission should be envisioned as a venture into a far country.

This book further seeks to navigate between two streams that could be viewed as two solitudes in evangelical Christianity: the new Christianity of the emergent church and the Neo-Reformed movement.

Acknowledging the strengths of both, Fitch and Holsclaw subject them to a healthy critique, and suggest that both suffer from being “trapped within a bygone cultural consensus of Christian dominance that no longer exists.”

Believing that the challenges of North American culture make Christianity both unintelligible and unbelievable to the average person, the authors describe markers for what could be a true “third way” for the North American church.

(Incidentally, talk of North American Christianity is made more credible in this book by the fact that David Fitch is Canadian. Repeated reference to Canadian as well as American cities and events hints at a cultural awareness beyond that of the average American author.)

Fitch and Holsclaw operate from a theological perspective they call “evangelical Anabaptist.” This is more than just a designation; there is much in the book to indicate that this term is appropriate for their kind of Christianity.

What readers will not find in this book is a formulaic approach to church work. Not only do they disavow any presumption that they write as experts, Fitch and Holsclaw insist that Prodigal Christianity is “not a program, an ideology or a destination.” Rather, it is “a way of being God’s people on a journey” among hurting peoples of North America.

Fitch and Holsclaw, who both teach at Northern Seminary in Lombard, Illinois, are also involved in Life on the Vine, a church community in suburban Chicago. (Holsclaw is one of the co-pastors of the church.) It is largely out of their experience in this church community that they suggest 10 signposts, or markers, of what they call Prodigal Christianity. These markers do not define discrete steps or statements of faith, but rather 10 broad considerations, areas in which Prodigal Christianity comes to bear on North American culture.

I find their work credible and their proposals highly commendable. Their theology of mission reveals a biblical understanding that refuses to be selective in its approach to biblical texts.

Readers will find that Fitch and Holsclaw critique only after affirming helpful statements made by influential church leaders, and then go on to explain the way in which they believe one-sided approaches can be improved.

The practical steps (and there are many) they propose are modest and achievable. Fitch and Holsclaw reveal a down-to-earth approach to church work, exploding the myth of academic versus practical approaches to ministry.

Both, for example, regularly spend time not at an exclusive coffee boutique but in the local McDonalds (which is where the idea for this book originated).

Both talk about having real-life conversations with neighbours and friends.

Both acknowledge that there is no sure-fire formula for success in Christian witness.

Even more, they don’t suggest that their own experiences form a pattern to be imitated; in fact, they would be quick to state that there is no one perfect way to do the work of the church. Their book merely outlines the larger considerations that should guide Christian witness in a setting where nothing can be assumed to be common ground.

To be sure, some of the suggestions may provoke a reaction, especially if readers come with expectations based on long-standing and unexamined theological habits. But a careful reader will notice that Fitch and Holsclaw document their proposals well, and their statements bear up admirably under the weight of close scrutiny.

Readers will find Chapter 8 on prodigal relationships of particular interest; its treatment of human sexuality is challenging but solidly orthodox.

This book is a worthwhile read for any Christian who has come to grips with the reality that being a Christian and doing the work of the church amounts to living as an alien in a foreign land. But rather than lament the problem, Prodigal Christianity points out steps to expressing the gospel of Jesus Christ as truly good news to people who desperately need to hear it.