What's New
Through the conflict, life carries on in Ukraine
A FOCUS on Mission
Must Patience Be So Slow?
Harold Jantz: A Heart for the Mennonite Story
Lorlie Barkman: A Life of Creative Engagement
Last Days, First Days
Women in Ministry: Bertha Dyck
January Moment in Prayer “Holy Spirit—Fill Us!”
The Church as the Patient Body of Christ
Advent: Making Much of Jesus: Christmas Day
Home Life & Faithfeature articles Why should we pay attention to the Reformation anniversary?

Why should we pay attention to the Reformation anniversary? 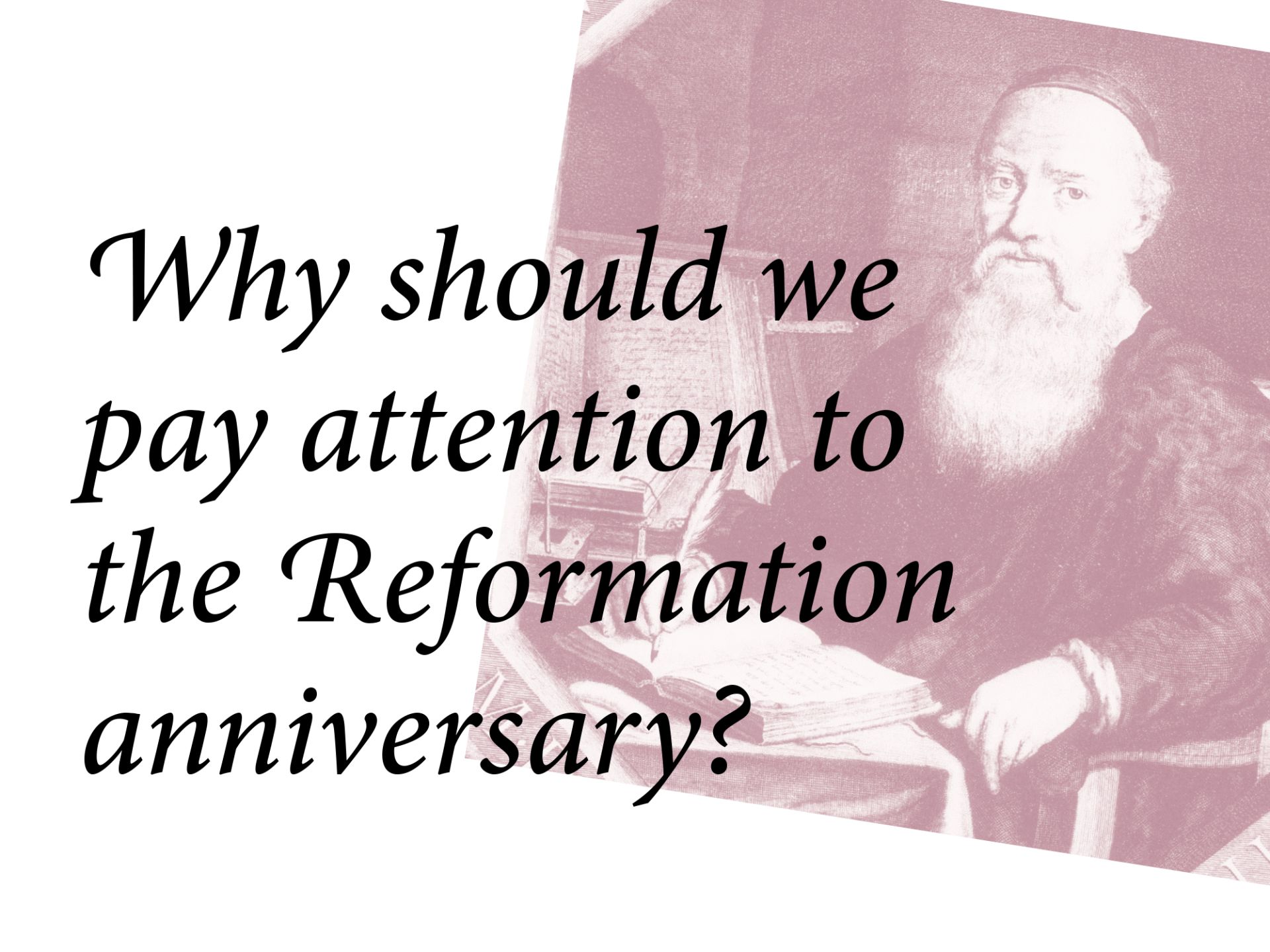 Martin Luther and the Anabaptists

2017 is the 500th anniversary of Martin Luther posting 95 theses on the doors of the churches in the city of Wittenberg, Germany, including the All Saints Church. What Luther intended as a debate over how to reform abuses in the Roman Catholic Church resulted in the break up of the Roman Catholic church and the start of the Protestant Reformation.

Why should Anabaptist Mennonites care about Martin Luther, a young university professor, and his reforms? Why should this anniversary be noted in Mennonite denominational papers?

The principal reason why Mennonites should care about Luther’s reform is that Luther is the reason why there was an Anabaptist Mennonite reform movement at all. Luther’s reforms, and the conflicts they spawned between Catholics and Protestants, created space for the Anabaptist movement to take root. These new believers sprang up in German states, northern Switzerland, Moravia and the Netherlands. Without Luther, and the other reformers who followed his lead, there would have been no Anabaptist movement.

Mennonites should also care about Luther’s reform because the early Anabaptist leaders were inspired by Luther’s key ideas. Luther’s reform began as a critique of the Catholic church’s practice of selling indulgences. In response, Luther formulated his central view that salvation is by grace, that is, a gift from God, and not by works.

When challenged about how he could make such a claim since it deviated from the beliefs of most of the great teachers of the medieval church, Luther said his authority was the Bible, not tradition. Specifically, he based his view of grace on the Apostle Paul’s letters to the Romans and Galatians. It was the Bible alone, Luther said, on which he based his view that salvation is by faith through grace.

Made the Bible available to the masses

Following this claim, Luther decided to make the Bible available to the masses by translating it into the German language. The newly invented moveable type printing presses made widespread distribution possible. Access to the Bible allowed people to read Scripture for themselves, and to implement reforms that they believed were consistent with Scripture.

Luther also rejected the control that the Catholic priesthood claimed to have over access to forgiveness. Luther believed that all believers had direct access to God – no priestly mediation was necessary. Luther called this the priesthood of all believers.

All these emphases Anabaptists applauded.

Even though at first Luther seemed to empower common people, he also spoke highly of the role German princes should play in any reform. When the peasants revolted (1524–25), Luther condemned them harshly. He cast his lot with the princes and adopted the state-church model for his reform. Luther looked to the German princes both for protection and direction. This decision set Luther and the Anabaptists against other.

Anabaptists believed that Luther’s reform ideas should have resulted in a believers church. Such a church would have consisted of those who truly had faith in God and had committed themselves to a life of Christian discipleship. This option would have led to a church that was a minority in the population. Accepting a believers church would have resulted in a pluralist society, in which minority church groups were tolerated. When Luther opted for the state-church model, placing the Lutheran church under the authority of the state and leading to persecution of minority churches, Anabaptists believed that Luther had betrayed the teachings of the Bible.

This commitment to a believers church allowed Anabaptists to reshape basic Christian beliefs and practices. Anabaptists emphasized baptism on the basis of adult confessions of faith, instead of infant baptism. Church leaders were chosen from within the community of believers instead of being appointed by church hierarchies or by state officials. Reforms were based on the church community’s reading of Scripture, rather than on the basis of what was politically expedient and approved by princes. Church discipline and social shunning replaced trials and executions of those with whom they disagreed.

For worship, Anabaptists gathered in houses, barns and caves to read Scripture together. They discussed biblical texts and discerned together, under the leading of the Holy Spirit, how to apply them to daily living. They sang songs composed by their own members based on experiences of persecution and martyrdom. No more majestic cathedrals, chants, organs, monastic choirs and elaborate liturgies where members were largely spectators. They rejected feudal oaths since their primary loyalty was to God and not to princes and emperors. They advocated a life of peace, rejected violence, refused to carry swords, forgave those who wronged them, and reconciled conflicts between members of the church.

One cannot imagine the Anabaptist movement without Luther’s reforms. And yet, the direction that Luther’s reforms took resulted in Luther becoming one the Anabaptists’ bitterest enemies. Even the Augsburg Confession of 1530, the basic Lutheran confession, included the following among a number of condemnations: “We condemn Anabaptists who forbid Christians to hold office,” and “We condemn Anabaptists who reject the baptizing of children, and say that children are saved without baptism.” Most Lutheran states crushed Anabaptist groups within their borders.

This sharp break between Luther and the Anabaptists, however, is not the end of the story of Luther’s influence on Anabaptist Mennonites. In the late 17th and 18th centuries, the Lutheran church spawned a Pietist movement, which has in many ways positively influenced Mennonites. Pietism emphasized Bible reading by laity, a warm devotional life, an experience of conversion and personal commitment to God, a life of discipleship, and an extensive hymnody. Pietists drew upon the early emphases of Luther, and thus in many respects, were close to the emphases of the 16th-century Anabaptist movement. (Editor’s note: the Pietist movement was particularly important in the genesis of the Mennonite Brethren church, inspired by Lutheran preacher Edward Wuest.)

Martin Luther and his followers have had a powerful shaping influence on Anabaptist Mennonites, then and now. It is appropriate to remember Luther and the significant contributions he made to all denominations of the Christian church, including the Anabaptist Mennonites. Luther was a giant in his age and will always be honoured for the major impact he made.

[John J. Friesen is professor emeritus, Canadian Mennonite University, Winnipeg. This article was made available through Meetinghouse, an association of Anabaptist editors.

I agree strongly that the anniversary of the reformation should defiantly be acknowledged by the mennonite community. When Luther posted his 95 thesis on the church doors his actions began the movement that would change the way that we worship God completely. The reformation did more than just alter a few rules or opinions on the way our churches should be run, it redesigned our religion altogether.
I especially loved your point about the anabaptist movement. The early anabaptists are one of the main reason the mennonite community can exist today and their beliefs and ideas were highly influenced by Luther and his teachings. It was Luther who drove the leaders of the anabaptists to fight for change. If Luther had not spoken his mind and taken action to reform the church for the better the anabaptist movement may have never even taken place.
Another excellent point was made about the bible being available to us. Back in Luther’s day only the priest would be allowed to read the bible because nobody else could read the language. It was when martin Luther became a priest that he first read the bible for himself (even after living as a monk for several years) once he read it he realized that the church had been portraying the word of God inaccuracy and realized that people need to be able to read the bible for themselves so he translated it to German and again changed everything.
It is unfortunate that so manny mennonites are not aware the major impact that Martin Luther had on our lives, It makes me wonder what our Sunday morning worships would look like today if it were not for him. God certainly had a plan the night that Luther was caught in that thunder storm. If it weren’t for that night he would never became a monk, never would have became a priest in Germany, never would have read the bible for himself and realized that the church was not accurate in their teachings. Luther is the reason that we know that there is a loving God caring for us, not a God who would make us pay money for forgiveness. The reformation is the reason we can learn and worship God the way that we do and more people should be aware of it and how much it’s impact has effected our lives. This article is a great reflection of the importance
of the reformation anniversary and very accurately shares the events that would have never taken place without it.