What's New
Through the conflict, life carries on in Ukraine
A FOCUS on Mission
Must Patience Be So Slow?
Harold Jantz: A Heart for the Mennonite Story
Lorlie Barkman: A Life of Creative Engagement
Last Days, First Days
Women in Ministry: Bertha Dyck
January Moment in Prayer “Holy Spirit—Fill Us!”
The Church as the Patient Body of Christ
Advent: Making Much of Jesus: Christmas Day
Home Arts & Culture A primer on Anabaptism 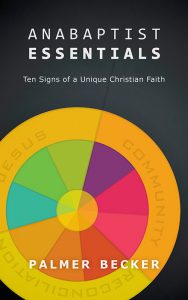 According to 2015 statistics from Mennonite World Conference, there are more baptized members of Anabaptist-related churches in Africa (736,801) than in North America (682,559) or Europe (64,610). In addition, many Anabaptist church members in North America are not from European descent. In the city of Winnipeg, for example, I know of at least three Mennonite Brethren churches where the majority of the members fit this category: Philadelphia Eritrean Church, Eglise communautaire de la Rivière Rouge, Winnipeg Chinese MB Church. In this light, it is very important that books on Anabaptist Christianity be available to Anabaptist Christians like me who was born in Haiti and has been a Mennonite Brethren church member for only eight years. I am pleased to say that Anabaptist Essentials: Ten Signs of a Unique Christian Faith by Palmer Becker is one of such books.

As I read Anabaptist Essentials, I kept thinking, “what a great primer on Anabaptism!” The 180-page book is written in a very clear and simple style which makes it completely accessible by anyone. A former pastor, church planter, missionary, conference executive and educator, Becker introduces his teaching on the Christian faith from an Anabaptist perspective (as he puts it) with three basic concepts: Jesus, community, and reconciliation. To explain these three words, the author gives us “three short sentences that have become widely used and memorable: Jesus is the centre of our faith. Community is the centre of our life. Reconciliation is the centre of our work” . Becker argues that these statements constitute the core values that have given birth to the Anabaptist movement. “They are essential to the Christian faith and central to what it means to be an Anabaptist Christian.”

Between the introduction and his discussion on the aforementioned three Anabaptist core values, Becker inserts a short chapter on the history of Christianity. There, he reminds us that “the Early Church was born on the day of Pentecost,” and over the following few centuries, many changes brought the church into the era of imperial religion called Christendom. Two prominent figures influenced these changes: Constantine, the politician, and Augustine, the theologian.

In that section of the book, Becker reminds us also of the following: after having realized inadequate practices of the Christian faith, Martin Luther, Ulrich Zwingli, and John Calvin attempted “to bring correction to the Christian faith and renewal to the Church.” By their actions, especially after Luther nailed 95 theses to a church door in Wittenberg on , these three men unintentionally launched the great Protestant Reformation of which we will be celebrating the 500th anniversary this year 2017. But, because of collaboration between Protestant church leaders, political authorities and feudal lords in an attempt to maintain order following the 1524 series of German peasant uprisings, the Reformation brought very little change in the church. Believing “that the Church should be composed of those who make an adult confession of faith and who commit to following Jesus in daily life,” (page 21) on January 21, 1525, Conrad Grebel, Felix Manz, and George Blaurock baptized one another and thus began the movement called Anabaptism.

In order to explain in more details the three Anabaptist core values,

Becker maintains that the Holy Spirit is the one who gave the early Anabaptists a new vision for the church and the fortitude to live it out. The Holy Spirit is therefore central to understanding Jesus, community and reconciliation. Hence, a tenth characteristic of Anabaptist Christianity:

I am very pleased to have had an opportunity to read an advance copy of Becker’s book on Anabaptism. For those ethnic Mennonites who may have naturally internalized the history of the Anabaptist movement, this book will serve as worthy refresher. For those who are Mennonite only by faith, Anabaptist Essentials is a must-read to better understand this faith tradition they have embraced.

[Arisnel Mesidor is the Migration and Resettlement Program coordinator for MCC Manitoba. He is a member of Eglise Communautaire de la Riviere Rouge.