What's New
Boldly advancing the gospel from our knees
MCC sends food and relief to Cubans in...
Robert Dagenais, pastor of the Sainte-Thérèse church, is...
More donated hay needed to help farmers in...
“God’s time was perfect”
Hope and pray every day
Resilient Leadership: The gift of self care
Project Redemption
Blue Christmas
“Repent, for the kingdom of heaven is near.”
Home Life & Faithfeature articles Freely, we have received

Freely, we have received 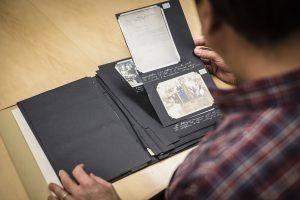 As a young surveyor, John Stoughton Dennis witnessed the first arrival of Mennonites from Russia to Manitoba in the summer of 1874. Dennis was intrigued with this group of immigrants aboard the paddlewheel river boat, International. He saw how they in new settlements on the prairie. He continued to watch them from afar, noting how quickly they paid off their debts to the government. Later, Dennis became aware of the Mennonites’ alternative service work as Red Cross medics on the hospital trains during WWI in Russia.

Because of these favorable connections, as a commissioner of the Canadian Pacific Railway (CPR) in 1922, Dennis recommend that the CPR extend extra ordinary generosity to the Mennonite community. Dennis understood the Mennonites to be industrious, hardworking and honest, making them good pioneers on the Canadian prairie land the CPR wanted to .

Saskatchewan bishop David Toews met with CPR officials to find a way of bringing persecuted and impoverished Mennonites out of the increasingly chaotic and dangerous Soviet Union to Canada. The CPR was not in the practice of extending credit; however, with the lobbying of Colonel John S. Dennis, Toews was able to secure a deal with CPR president Edward Beatty. On the strength of David Toews’ name and the reputation of the Mennonite people, the CPR extended an initial $400,000.00 in credit to the Mennonites. It was a contract based on trust. 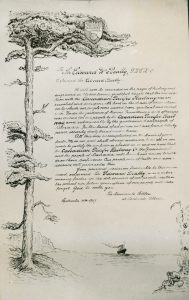 With David Toews leading the Canadian Mennonite Board of Colonization in Rosthern, Sask. and Benjamin B. Janz working from the Russian side, more than 20,000 Mennonites escaped the Soviet Union to Canada between 1923 and 1930. By this time, the CPR had extended more than $1.7 million in loans to the Mennonites (worth more than $23 million in 2016).

However, the Great Depression made farming especially difficult, and many Mennonites found the travel debt (Reiseschuld) an overbearing burden. Fathers sent their young women to the “dangerous” city to work as maids in wealthy homes so they could send money to their families on the farm.

In 1937, the Mennonite community held a service of appreciation in Coaldale, Alta., to thank Dennis, Beatty, Toews and the CPR. The actions of the CPR “meant salvation of the body from death of starvation,” said B.B. Janz that day, “but also salvation from moral and spiritual peril.

“Not just one generation was saved, but also their children and the generations to come. In the midst of a world full of suspicion and ill will, the act of trust on the part of the Canadian Pacific Railway, which they have shown towards our people in recent years, will be outstanding for all times. Col. Dennis, you have continued with trust and confidence, where ordinary business had no place for such things…. [He] allowed his office to become a house of God, where the resolution to save so many lives was passed and carried out, an act of Christian Charity unequalled in the history of today…. We thank you for this confidence and faith, which you have shown up to this present day.”

Elderly Col. Dennis struggled to keep his composure as a group of teenaged girls laid bouquets of flowers at his feet, saying, “You saved our lives; thank you.” His chin quivered and tears began to roll down his face. 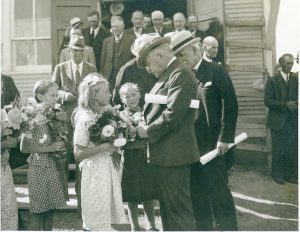 But, the debt was not finished! Toews, a slight man who showed great internal strength, had many sleepless nights, offered earnest prayers and shed tears as he struggled for 20 years to conquer the debt. Some people could not repay, some chose not to repay, and others paid much more than their share. He was adamant that .

At the beginning of April 1946, Toews sent out his last appeal, urging families to contribute $40 and congregations to take a collection. The CPR forgave over $1 million in interest but community needed to finish repaying. Toews was ill and had to resign from his post, leaving the debt to others to wrestle down. Now, money was collected for his medical expenses. At the end of 1946, as David Toews was frail and dying, he received the news: “You have not been disgraced with your guarantees. Malice has not won the day.”

The debt was repaid. Col. Dennis’s faith in the Mennonites and the CPR’s generosity extended to the community were not misplaced. There was a long pause.

Tears fell from his eyes, and David Toews rejoiced: “God be praised!”

Generous love amid war in Democratic Republic of...

From selling homes to feeding them

How do you practise everyday generosity?

A generosity of spirit

Giving and the father heart of God