The Canadian Conference of MB Churches’ (CCMBC) finance committee made several presentations at Gathering 2014 in Vancouver, including a summary of the findings of a recent financial audit that prompted the launch of a new corporation. 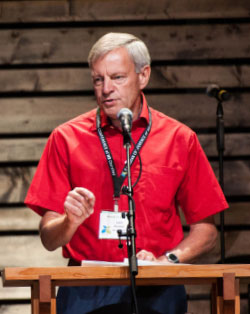 In order to separate investment funds from day-to-day operating costs of the organization, the Canadian conference created a separate legal entity called CCMBC Legacy Investments, Inc. All investment monies – including deposit accounts and mortgages given to churches and pastors – will be managed through this new entity.

The finance committee admitted it couldn’t currently provide many details about CCMBC Legacy Investments, Inc. due to the legal nature of the recommendation. They did say, however, that the creation of this corporation was driven by a desire to improve compliance to the law, reduce risk and streamline governance.

“Sustainability is always in the background of our thinking,” said finance committee chair Harold Froese. “CCMBC Legacy Investments Inc. may generate more or less revenue for us. We just don’t know about the level of profitability it will have. At this point, the investment funds have grown faster than the demand for mortgages. But, as we heard, God is leading us to the heart of the city, which leads to higher costs – higher ‘investments.’ There are many unknowns.”

The financial committee is also working toward building a reserve fund valued at approximately 10 percent of the total amount on deposit (some $26 million). However, the reserve fund is still low (at only $2.7 million).

“We discovered we had overstated the value of our net assets [on previous years’ tax returns], which greatly lowered the reserves we had to work with,” said committee member Len Penner. (He explained that the auditors had recommended a change in how CCMBC should manage land held for development, which prompted the change in reporting.)

In order to offset this difference – which is close to $10 million – the executive board will now move faster in selling some 10 properties originally purchased for development. Penner said the properties are currently being appraised and will go on the market in the near future, although he suspects it may take years to sell all the land.

Penner indicated that the original purpose of the deposit fund – to provide mortgages for pastors and churches who may find it difficult to get loans from traditional banks – still exists. To date, the conference has provided nearly $87 million worth of mortgages.

The financial committee then presented a motion to approve an $18.2 million budget for 2015. (The total amount is a consolidated figure that includes amounts for facilities, operations, finance administration and interest costs.)

Looking at the 2015 ministry budget, Penner pointed out that revenue from member churches has continued to decrease over the past years, and he wondered how the conference could move to a place where ministry wasn’t so heavily funded by interest earnings from the investment fund.

“The best opportunity is not a cost reduction,” said Penner, “but one of revenue generation. We are far from tapping out revenue potential. One [income] line that has been flat is church contributions. What will it take for churches to have confidence and vote with their wallets? We need to earn their respect and find a way to connect with heartstrings.”

One delegate asked about budget expenses, wondering whether every dollar was spent wisely and efficiently. “Every time you open the Herald, someone new has been hired at the conference. It feels like it’s getting top heavy. What’s the actual amount spent on staffing?”

Harold Froese replied by saying the number of conference staff has remained consistent at approximately 58 people for 2–3 years. “We don’t see it as staffing costs,” he said. “We say it’s a staffing investment in the kingdom.”

Another delegate asked about the wisdom of CCMBC decreasing its financial support for the International Community of Mennonite Brethren (ICOMB).

“[The budgeted amount for ICOMB] in no way signals a reduction in support,” said Froese. “What we’re trying to do is allow other countries to step up to the plate. We don’t want to be seen to be directly or indirectly running ICOMB. But if there were a great need, we wouldn’t walk away.”

Delegates passed the motion to approve the 2015 budget by an overwhelming majority.

For more Gathering 2014 stories, photos, videos and blogs, see reports in this issue

Board of faith and life