What's New
A FOCUS on Mission
Must Patience Be So Slow?
Harold Jantz: A Heart for the Mennonite Story
Lorlie Barkman: A Life of Creative Engagement
Last Days, First Days
Women in Ministry: Bertha Dyck
January Moment in Prayer “Holy Spirit—Fill Us!”
The Church as the Patient Body of Christ
Advent: Making Much of Jesus: Christmas Day
Advent: Making Much of Jesus: Fourth Advent
Home News Special General Meeting 2017 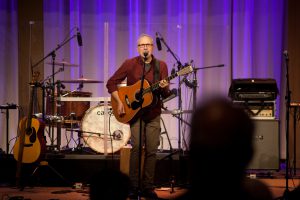 “This generation sees church planting and mission as hand in hand; we’re making disciples in the nations,” said Mike Penninga of Kelowna Gospel Fellowship about the proposed merger between the C2C Network and MB Mission, which passed the delegate vote with 85% approval. “This is a singing kind of day.”

Following breakout sessions with information and opportunity for questions on the merger, the 2018 budget and the One Mission Partnership Task Force, the Special General Meeting began at 3:30 p.m. Nov. 1, 2017, after a time of corporate worship in song and prayer.

The motion that “MB Mission assume responsibility for mission and ministry of C2C” effective Jan. 1, 2018, drew discussion on the conference floor. 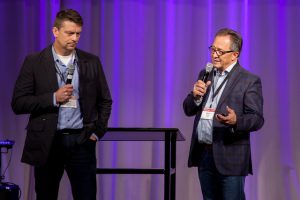 The word accountability arose in various forms in all three breakouts earlier in the day and was a preoccupation during the SGM discussion time as well. Delegates expressed concern that reporting and relationship with church planting and missions could become to distant from relationships in churches.

If the church is the driver of mission, the question should be turned back on local churches, said moderator Bruce Enns. “How are we doing at making disciples and [seeing] churches emerge?

In response to delegate’s request for a higher threshold to be set for a majority vote, the parliamentarians instead announced the number of vote taken by secret ballot (192 yes, 35 no).

“The budget was a huge struggle,” said CFO Jim Davidson, calling it a balancing act between revenue and desire to do ministry. 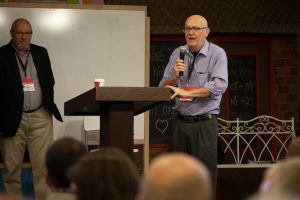 “We recognize we need to develop leadership,” said Davidson in response to the responses the finance team received regarding the closure of L2L and deep cuts to the seminary and ETEQ. Seminary representatives expressed concern about greater expectations on their leadership development resources combined with a reduced budget.

Davidson committed that if church giving exceeds the budgeted amount in 2018, a portion will be allocated to the schools on a prorated basis at the end of the year.

The motion to approve the budget carried, sealing a different operating status for CCMBC in 2018 (see “Changes to the CCMBC budget for 2018”) and the future, responding in part to the recommendations in the budget amendment at Gathering 2016 (see “Gathering 2016 business report”).

Delegates elected a Dan Guggenheimer to the Legacy board and approved that the CCMBC Member Representative vote in favour of the Legacy nominations. This appointment avoids the necessity of holding two separate delegate AGMs for the business of CCMBC and Legacy. 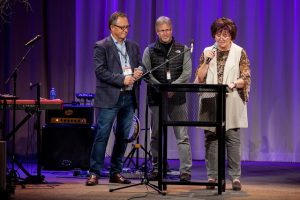 The appointment of Ingrid Reichard as Board of Faith and Life chair, originally listed as a motion, was not processed by delegates because the change covered a term completion for David Miller who stepped down as chair but remains on the board.

“We need to lament loss of vision and calling, in particular, the people for whom this is disruption of livelihood,” said Cheryl Pauls of River East MB about L2L, calling for a public honouring of staff Daniel Beutler, Teresa Born, Dave Jackson and Alain Despres, whose ministry in this form comes to an end Dec. 31, 2017.

Further notes on changes resulting from the 2018 budget

The reductions in the CCMBC budget resulted in the closure of the leadership development department, L2L, and deep cuts in funding to partner organizations MB Seminary, ETEQ and ICOMB.

Additional, CMBS and MB Herald are affected. The Centre for MB Studies will operate with a third of its usual budget in 2018, reducing director Jon Isaak’s service by half. The net CMBS budget went from $93,000 in 2017 to $30,000 in 2018. Half-time CMBS archivist Conrad Stoesz left in summer 2017 to serve as full-time director of the re-organized Mennonite Heritage Centre Archives (now a partnership of Canadian Mennonite University, the Centre for Transnational Mennonite Studies, and Mennonite Church Canada).

MB Herald readers will be asked to contribute toward the printing and distribution costs of the magazine by taking on a paid subscribership. Letters will be sent to readers to explain how to subscribe in 2018. 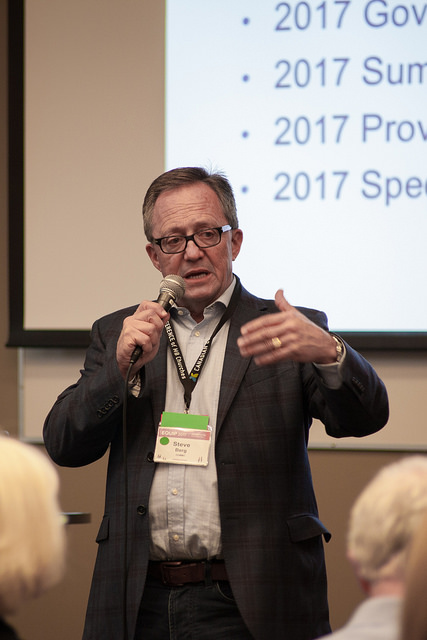 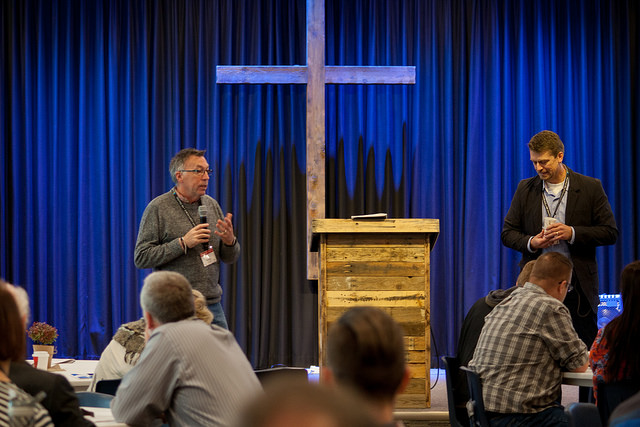 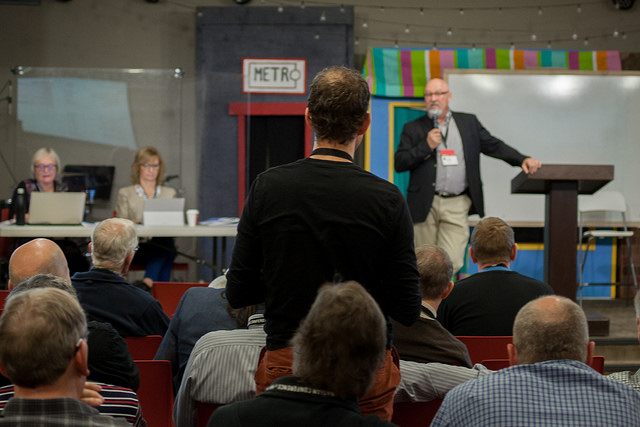 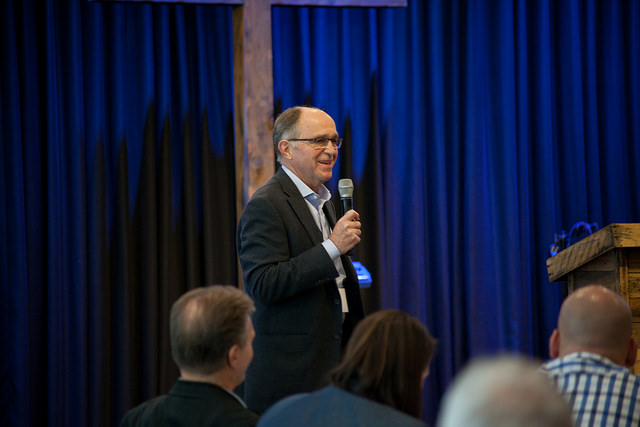 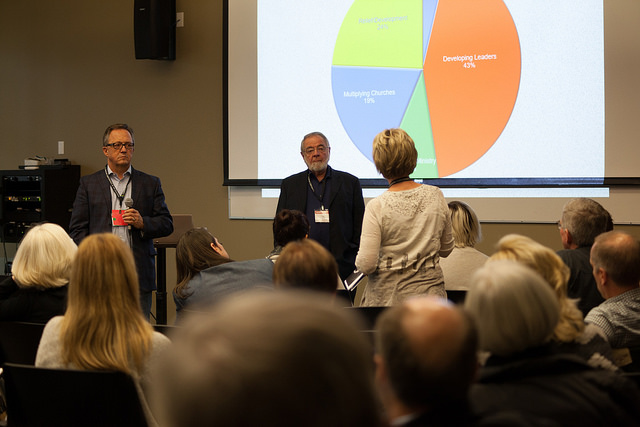 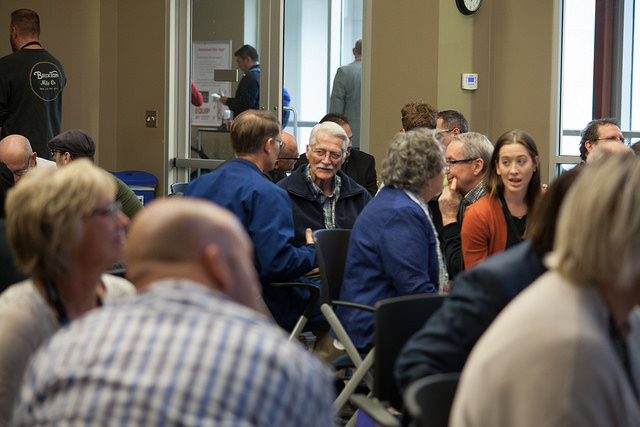 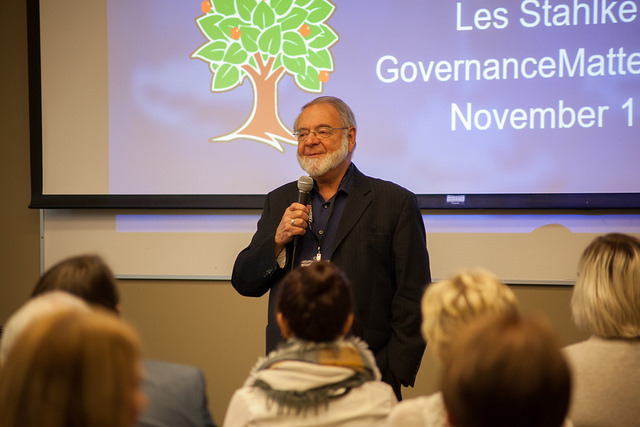 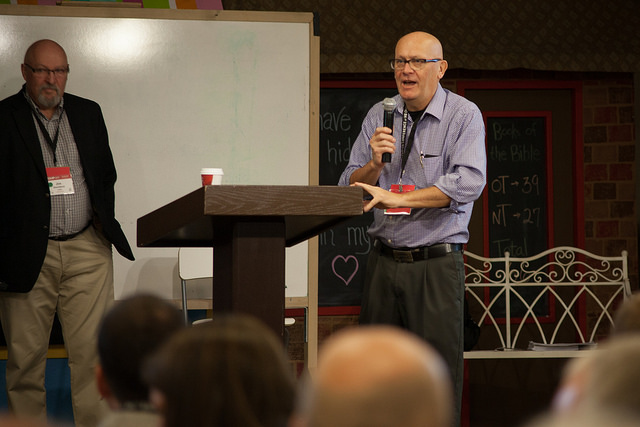