What's New
Multiply September Ukraine Updates
Volunteers in B.C. honour Leamington woman tragically killed...
Delete or not to delete, that is the...
Believers bring water for drought baptism
Encouragement to those in the arena
Keeping attention and making an impact: A few...
Open hands to reconciliation
From the editor
Approaching truth and reconciliation with love in our...
MB Seminary offers new MA in Transformational Leadership...
Home Life & Faithfeature articles Into a bold future

Although the 2012 annual general meeting of the Canadian Conference of Mennonite Brethren Churches (CCMBC) lasted longer than planned, most delegates stayed to the end. Many wanted a chance to voice their opinion about the ambitious budget recommendation, brought to the floor by the executive board.

On Saturday morning, delegates approved a $5.5 million expenditure budget for 2012–2013, up from last year’s $4.4 million. A significant portion of the increased funding will come from the gradual withdrawal of operating reserve funds over the next two years ($1.3 million in the first year, and $700,000 the following year), as well as increased stewardship earnings from investment income. Longer term funding will come from increased church support, fundraising, and program adjustments. 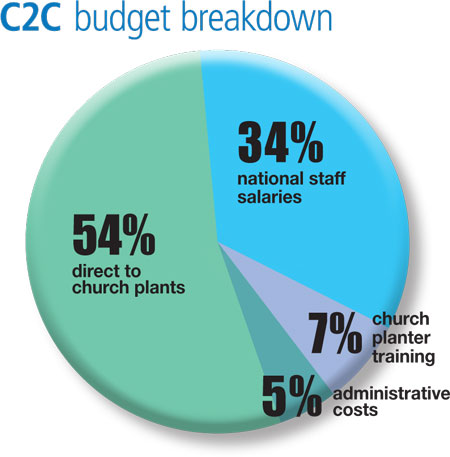 “Our stewardship reserves are like a rainy day fund,” says CFO John Wiebe. “The board decided it was time to use some of that money. This isn’t a period of desperation – we believe we’re in a season of incredible opportunity.”

The budget reflects a renewed focus on church planting – as Canadian MBs “dare to hope for the salvation of all Canadians in the next two to three decades.” C2C Network’s church planting budget now stands at $2.2 million.

Director Gord Fleming offered a breakdown of how the money will be spent. He said that 54% will go directly to church plants for start-up costs, pastoral wages, etc.; 34% will be earmarked for national staff salaries; 7% will go to training church planters; and 5% will be used for administrative costs (see graph).

With additional monies coming in through fundraising, as well as provincial church planting budgets, the total amount for church planting across Canada is nearly double the $2.2 million allocated in CCMBC’s budget.

During the AGM discussion session, several questions were raised from the floor. Is this year’s budget sustainable into the future? What happens after the one-time transfer of funds from stewardship reserves?

Executive board member Harold Froese believes that when members and churches catch the vision for evangelism in their hearts, it will transfer to their wallets. He also said the executive board will look for places to reduce expenditures – though, for 2012–13, most other CCMBC ministries will remain status quo.

Some delegates voiced questions about the C2C ministry, wondering if the church planting network reflects holistic MB theology (see Luke 4) as laid out in the Confession of Faith.

“There’s no resistance [in this room] to evangelism,” said Ken Peters of Saanich (B.C.) Community Church. “Indeed, it’s part of our historical DNA. However, while I’m in favour of mission and church planting, I’d like to see C2C securely embedded in our Confession of Faith – that training and coaching wouldn’t be disassociated from our structures, such as MBBS.”

At the end of the day, despite concerns, delegates registered strong approval for the executive board’s bold budget. They also voted in favour of moving the Canadian conference’s financial year end to Dec. 31.

“We are blessed with resources,” said executive board member Len Penner. “[We have] people with compelling visions who have created, with the help of the Holy Spirit, tremendous results.”