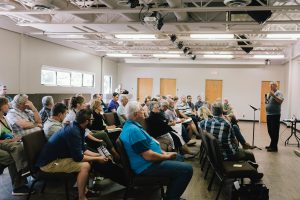 “We acknowledge there’s a trust issue,” says Phil Gunther, SKMB director of ministry. “The healthiest thing we can do is say it’s there.”

But he challenged people to not stay there but to take steps to address the reasons for the mistrust.

“Is present model working for you as an individual church?” He asked: “That’s what it is really about.”

Delegates received yellow cards as they entered the room, to add to their green and red voting cards. At the beginning and end of the question and answer session, they were asked to signify their intentions to vote by lifting Green for unqualified approval, Red for lack of support for the collaborative model – and Yellow for affirmation with qualifications/cautions. This allowed delegates to signify reservations without appearing to be against the motion.

Delegates, still unclear on the collaborative model, posed questions to the provincial conference staff and each other:

“This model takes us to a budget without a voting mechanism,” said one delegate.

Votes from provincial conferences will go to the national assembly and be totalled there, said JP Hayashida, CCMBC director of operations, not in a “first past the post” system at the provincial level.

“I understand the tensions between preferences of congregational vs elder decisions,” said one delegate, “But can’t we keep it the same as we move on? If we change it down the road, we’ll have time to figure that out.”

The suggestion of an amendment (stipulating the voting mechanism in the collaborative model would remain the same initially) for the AGM resulted in a higher number of green votes at the end of the session.

Representatives on provincial boards will be voice of each province, Ed Willms, ONMB executive director, explained.

“But the boards don’t carry their own votes, they carry the votes of the church,” said DaSilva.

Some pointed out that few churches consult with the congregations about the issues at upcoming conventions. “We’re making the assumption churches will talk about more at the provincial level than the national,” a delegate said. “We need to find ways of engaging the moderators, lead pastors, to get these conversations on the table locally.”

“We’re asking for change of behaviour at church level,” said DaSilva. “Wrestle with those things before the convention floor. Come informed.”

Others pointed to the many success stories that collaboration is already happening. An in-principle decision (without a clear plan or structure to follow) is interpreted in multiple ways down the road, creating potential for more loss of trust. 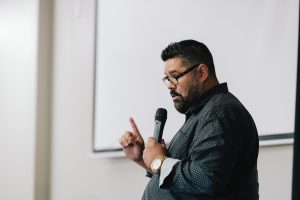 If the model proceeds, we need to acknowledge loss of face-to-face gathering where people from regions and perspectives that are different meet together and wrestle through decision making, said another.

He also cautioned that ministries with a very small staff that don’t fall as directly within the conference structure (e.g., ETEQ, ICOMB, will now have the challenge of coming “cap-in-hand” to each province to seek support and funds.

With the new model, Paul Loewen, ABMB conference minister, answered, “Provinces will have better understanding of where money is going.” Instead of a CCMBC line on the budget, they would see the breakdown of how all the funds are dispersed in the different areas of ministry.

It actually increases the workload of provincial staff.

“The benefits are worth the cost,” said Ed Willms.

“That I’m here today is because of the cooperative impact [of provinces working together and helping each other],” said Alain Despres.

The national conference consists of the national office and a body of churches, another delegate observed. “What are theological implications of not gathering in person to discuss these matters? What does that say about us about as Anabaptist evangelicals?”

“That this is driven by what we believe is important,” said another delegate. “Not governance or structure but ecclesiological values.”

The challenges CCMBC faces include disengagement, decline, financial reductions. “My concern is the solution will exacerbate the problem.”

“The proposed structure may result in divestiture. It could potentially distance the local congregation, exacerbate that felt distance some congregations already have,” a delegate cautioned.

“This isn’t the time to debate leadership styles [i.e., congregational vs elder-led],” said Paul Loewen. “Not all the leaders, but the elders and apostles made decision in Acts 15, and the rest [agreed].”

“The collaborative model has relationship built into it,” said Gerald Dyck. “We get to look each other in the eye and dream and vision together.”

Vote on the collaborative model will take place at the AGM.

Read more about the collaborative model