What's New
Through the conflict, life carries on in Ukraine
A FOCUS on Mission
Must Patience Be So Slow?
Harold Jantz: A Heart for the Mennonite Story
Lorlie Barkman: A Life of Creative Engagement
Last Days, First Days
Women in Ministry: Bertha Dyck
January Moment in Prayer “Holy Spirit—Fill Us!”
The Church as the Patient Body of Christ
Advent: Making Much of Jesus: Christmas Day
Home Life & Faithinspirational How beautiful are the feet

How beautiful are the feet 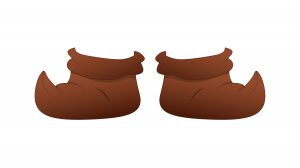 A pair of slippers crafted from fine leather, we caught the eye of a Canadian couple visiting relatives in Germany in 1983. They brought us home to protect the feet of their son, whom we call HPK.

Over the years, we’ve served in all kinds of places; HPK takes us almost everywhere he goes.

Most nights, we are parked beside his bed. One of the first things HPK does after he gets up is to slip his feet into our firm and comfortable frame. We enjoy keeping his feet warm and clean. We are grateful to be of service and we love to know that we are valued.

The first bed we settled beside was in the North Peace country. There, we protected HPK’s feet while he followed the call of God as music director at Peace River Bible Institute, Sexsmith, Alta.

Not long after, HPK, his wife and 2-year-old son moved to a one-bedroom basement apartment in Winnipeg, Man. There, we did valiant work on the cold floors over HPK’s two years of rigorous study at Mennonite Brethren Bible College and University of Winnipeg.

Having earned a double major in Choral Conducting and Voice, HPK took us back to Sexsmith where we were delighted to once again walk familiar hallways and rooms.

Four years later, along with other slippers, mitts and hats, we were stuffed in a box and carted back to Winterpeg.

The family had become a foursome, so it was a three-bedroom home with a full basement that became our house. Now, a luxurious and comfy orange shag carpet was our marching grounds while we served HPK as he served NKMB as a pastor.

After a number of years, HPK’s feet betrayed some inner struggle. Restless paths traced over the floor told us big changes were coming.

The affirmation of others helped HPK discern that his heavenly Father wanted him to pursue a senior pastor position. We warmed his feet as HPK and his wife discussed what this would mean for the family: back-to-school for him and a full-time job outside the home for her.

From 1993–1996, we protected HPK’s feet as he earned an MDiv at Providence Seminary, Otterburne, Man. Then, restless paths worn into the orange shag told us he was contemplating another move.

So, we were again packed among slippers, mitts and hats in a moving van – traversing four provinces in the middle of winter.

Ready to warm HPK’s feet again, we finally arrived in the little town of Grand Forks, B.C. – which we soon discovered to be a wonderful place. For almost 20 years, we have walked HPK over many tiles, linoleum, carpets and cement in all kinds of homes.

The paths we’ve traced on the floor draw a picture of a variety of ups and downs – some difficult days, many joyous. One of the verses that has kept HPK through all the vicissitudes of life is “Faithful is he who calls you, who also will do it” (1 Thessalonians 5:24). Even from our perspective on the ground, we know that HPK and his wife give glory to God for allowing them to serve him and the folks in Gospel Chapel and in this valley.

The feet are pacing again – but it is a less urgent feel, almost as if a time of rest is coming. We hear this word “retirement” and hope it doesn’t refer to our worn leather.

HPK has always treated us with care over these last 33 years. We don’t know what is ahead for HPK and his wife, but we know the God who has led them thus far – caring tenderly for HPK as he has for us – will continue to direct their steps toward the next adventure.