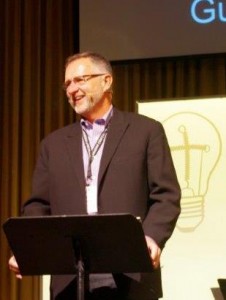 Conference minister Rob Thiessen wants leaders to innovate – “to do new things.” The light bulb was an innovation, he said to the opening session of the annual convention of the B.C. Conference of MB Churches, May 1–2, 2015, at South Langley Church. So was the power grid to light it. The inventor, Thomas Edison, also developed a team of inventors for purposeful innovation. Today, Thiessen said, the world is full of innovation. But do pastors innovate?

Thiessen told delegates that God’s eternal message is powerful and unchanging. “But it must be preached and understood in the world in which we live. It’s about getting the message out.”

The book of Acts demonstrates God’s amazing innovations in the early church, he said. The spirit of God blows on believers in the upper room, and soon the gospel is being preached to “unclean” Gentiles. “Then Paul, a Jew, is standing before the Parthenon in Greece. And the world is turned upside down.” 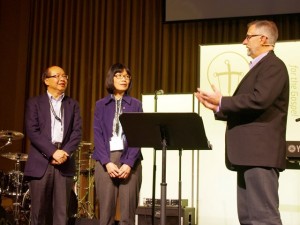 Thiessen said the church must read Scripture in a full, understanding way, avoiding “boxed-in views.” He said, “Surely we can uphold the essential truths in Scripture, yet surely there is room to utilize the gifts God has given. We don’t need a fear perspective. We need a faith perspective.”

Thiessen during his exhortation introduced “four friends” who had innovated: 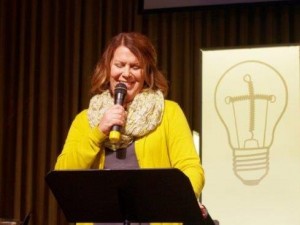 Janet Thiessen (wife to Rob), pastor of women’s ministry and local mission at North Langley Community Church, said her church looked at ways they might help their community. North Langley is a suburb, not an inner city area with need for soup kitchens or relief – and they found a new perspective.
In many churches, only families are lifted up, “while homes are breaking up around us. Single moms were struggling to support their kids and we weren’t noticing,” said Janet.

For the past five years, North Langley has invited single mothers and their families to Community Saturdays, including lunch speakers, social time, takeaway dinners, gifts, and help from the church’s men to go out and fix and paint in the summers.

“In a small way,” Thiessen said, “we are learning compassion and generosity.” 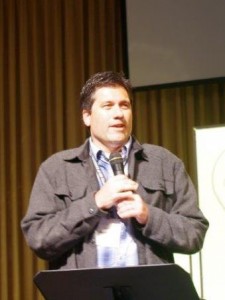 Jeff Bucknam, lead pastor at Northview Community Church, Abbotsford, told the story of two churches that are now one.

Northside, across the Fraser River in Mission, had asked the B.C. conference for help. Ultimately, Northside asked Northview to adopt them and Northview overwhelmingly agreed.

Bucknam said on the first weekend after the two churches joined, 600 people attended Northside. “We thought it would trail off as curiosity seekers stopped attending. But, as of last Sunday, we are in two services, and close to 500 people come.” Bucknam said, “There are still big issues and challenges but because of Northview’s generosity and Northside’s humility, God is doing great things.”

See also “The church that bridged the river”

Mount Pleasant neighbourhood pastor Lance Odegard of Vancouver Artisan’s second parish related how the new campus came about. The building they had been renting was suddenly unavailable on three weeks’ notice, as of Christmas Eve.

The innovation that followed, said Odegard, “was only our prayer of desperation,” and God provided. The new facility, a former production studio, seats 100 – a tight fit – and sometimes people sit on the floor. But it came with soundproof rooms that are perfect for Sunday school.

“We have lots of people who grew up in church buildings, but say, ‘I never once heard that God loves me,’” said associate pastor Peter La Grand. “The beautiful thing at Artisan…is that element resounding with people.” He added, “Our innovation is to go back to what Jesus says and does.” 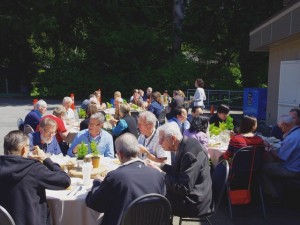 Delegates had homemade soup on the lunch break – and had the choice of inside or spring-time outside tables.

Jon Kornelsen, students and young adults pastor at Chilliwack’s Central Community Church, told how Central accepted a request to begin a new evangelical work in the community of Agassiz.

“As we started,” he said, “we realized there was nothing for students to do in this town of 6,000 people.” He talked with Brian Cool, pastor of the closest MB church at Harrison Hot Springs, who had a youth group “with a core.”

They started a partnership together last September, and now celebrate that almost four dozen students are regular attenders. “As I think about it,” said Kornelsen, “innovation comes in partnership.”

“It’s not us,” said Thiessen. “It’s not our snazziness. It is the power of the gospel. Have a mission that matters. The gospel is meant to be used. Like a heart, you have to exercise it. Risk!”

⇒Pastors: point people to Jesus (about the leader equipping day)