What's New
A FOCUS on Mission
Must Patience Be So Slow?
Harold Jantz: A Heart for the Mennonite Story
Lorlie Barkman: A Life of Creative Engagement
Last Days, First Days
Women in Ministry: Bertha Dyck
January Moment in Prayer “Holy Spirit—Fill Us!”
The Church as the Patient Body of Christ
Advent: Making Much of Jesus: Christmas Day
Advent: Making Much of Jesus: Fourth Advent
Home News Mennonite t-shirts 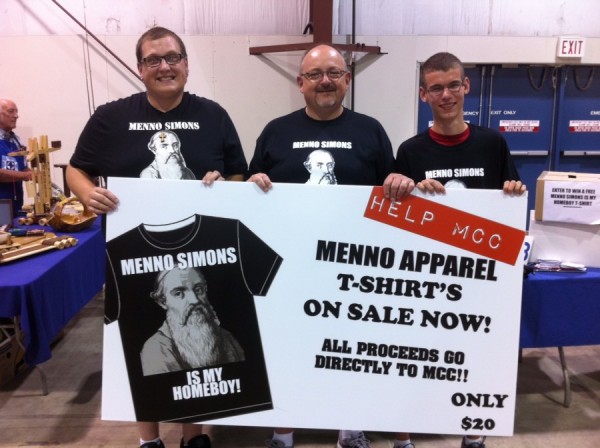 Jonathan Kornelsen’s teenaged “Menno” t-shirt concept that made his father laugh out loud is taking root as a fundraiser around B.C. and in two other provinces.

Now youth pastor at Central Community Church, Chilliwack, B.C., as a teen, Kornelsen thought it would be fun to wear a shirt that read, “Menno Simons is my homeboy.” As the annual Fraser Valley Mennonite Central Committee relief sale approached in 2011, the Bible college graduate remembered his t-shirt idea and had three shirts made to wear at the sale.

But his father Gordon’s laughter on seeing the shirt affirmed Kornelsen’s desire to do more with the idea. He ordered 90 shirts, snagged the last available table just three days before the start of the 2011 sale, and picked up his shirts the morning of the sale. His youth group sold 70 shirts at $15, with all net proceeds to MCC.

They did even better in 2012, selling 200 shirts that read, “Make borscht, not bombs.” They missed the 2013 sale, but are back this year with 300 shirts, including the newly designed “Rock and Rollkucken,” and a sleeveless shirt saying, “This is How Mennonites Bare Arms.”

“We have three goals,” says Kornelsen. “First, laugh. Second, help MCC. And third, create conversations – all things Mennonite – about who we are as a body of believers” while making some gentle fun with Mennonite stereotypes. 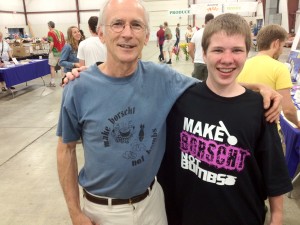 The shirts, he says, are amazing conversation starters. Kornelsen’s youth group knew they had started something good in the first year when they got questions like, “Who is Menno Simons?” and “What’s an Anabaptist?”

Kornelsen says he keeps his focus on Jesus in his youth group ministry. But in advance of each sale, he briefs his volunteer sales team, composed of about two dozen youth leaders, on what the shirts say.

The “Menno shirt” idea has caught on beyond the Fraser Valley. Mennonites from Alberta and Manitoba have made inquiries. Between Abbotsford and Calgary’s MCC sales, Kornelsen expects to sell some 600 shirts in 2014. At time of writing, Winnipeg is also expected to order a supply. (A shirt reading, “Mennonites put the oba in Manitoba” is another of the messages. Other examples can be found at Facebook.com/mennoapparel.)

Kornelsen says the project is not only fun, but he takes “great joy in knowing that all the proceeds from these shirts go to MCC and their amazing work.” He calls it a labour of love: “It’s one of the ways I can give back and say thank you to MCC, because if it weren’t for this organization, my family would not have been able to migrate to Canada in 1949.”

Am Mennonite. Love the shirts!!

great sayings………one that non-Mennonites do NOT get (at least not the OBA one!) lol

Where can I get an apron? Can I pick one up at the Abbotsford MCC?