What's New
A FOCUS on Mission
Must Patience Be So Slow?
Harold Jantz: A Heart for the Mennonite Story
Lorlie Barkman: A Life of Creative Engagement
Last Days, First Days
Women in Ministry: Bertha Dyck
January Moment in Prayer “Holy Spirit—Fill Us!”
The Church as the Patient Body of Christ
Advent: Making Much of Jesus: Christmas Day
Advent: Making Much of Jesus: Fourth Advent
Home Life & Faithfeature articles An invitation to discipleship

An invitation to discipleship 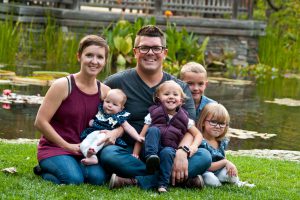 Nathan and Niki McCorkindale and their family.

Invitation. That sums up the last year of our family’s life. We have felt God inviting us to step out in faith, trust and obedience. Our question is will we accept?

A little over a year ago, my wife Niki and I were fairly certain that change was coming. We just had no idea how big it would be.

We had just completed five years pastoring at Philadelphia MB Church in Watrous, Sask. Things were going well. We lived on a beautiful acreage just outside of town, we were serving a fantastic church full of people we love, we had friends and family close by. Life was great.

But we also had a sense that something new was on the horizon – an intriguing, but not necessarily appealing prospect.

Yet, as we prayed, we both had an undeniable sense that God was saying, “If you are willing, I could use your gifts somewhere else.”

There it was. Invitation.

So we kept praying, thinking, talking.

In 2016, I had the privilege of participating with MB Mission on SOAR Saskatchewan. God had used it to change my life in some pretty significant ways. Nothing was going to keep me away the next year.

This February, during one out our worship times at SOAR, I had this crazy idea. “What if we quit and packed up our family and served with MB Mission for a few months?” I texted Niki. “Maybe we could go on TREK?”

Amazingly, at eight and a half months pregnant with our fourth child, she responded immediately with “Yes!”

The timing was great. MB Mission Central Canada mobilizers Lloyd and Carol Letkeman and Matt and Ruth Braun were right there in Saskatoon. In no time, we were sitting around a table at West Portal Church, talking about options and praying together. We learned that with parental leave, I could receive almost half my income while we went on mission! This would help cover some costs and provide some of the security we were worried about.

We spent the next days and weeks praying, reading Scripture and wrestling with God. I never saw myself as the kind of person who would serve in a foreign country. I love the comfort of speaking English. My tolerance for risk isn’t exactly high. As much as I might pretend otherwise, I’m a Walmart and McDonald’s kind of guy. (Don’t let the V-neck fool you.) I enjoy my toys and TV shows.

On top of my personal preferences, I worried about what would happen to my family if we took this invitation to risk.

This was a war for my heart and obedience. God was asking, “Are you willing?”

In one time of prayer, I began to understand that there are many ways to die. Some are physical, but our hearts and souls can die just as easily on the couch in Canada as our bodies can die in a foreign country.

The moment I knew for we had to go came during my devotions one morning. “A certain man hosted a large dinner and invited many people. When it was time for the dinner to begin, he sent his servant to tell the invited guests, ‘Come! The dinner is now ready.’ One by one, they all began to make excuses.” (Luke 14:16–18, CEB, italics mine)

Jesus drives home the force of the story in verses 27 and 33: “Whoever doesn’t carry their own cross and follow me cannot be my disciple.” And “In the same way, none of you who are unwilling to give up all of your possessions can be my disciple.”

How often have I read those verses? Now it was real. I had lots of excuses. Some of them were even good. But! Did I want to be a disciple? Or was I merely an onlooker, a member of the crowd?

This was one of those decision points in life when the choices we make shape us irrevocably. My choice was clear. It was time to go.

Within weeks, we had resigned at the church. I emailed Carol: “I hope you weren’t joking about having a place for us to serve with MB Mission because we are coming!”

People ask, “Are you thinking about long-term missions?” We don’t know. That journey of discernment is much further down the road.

This is about obedience: we are responding to the One who asks, “Are you willing?” It is about being a disciple of Jesus ready to give up security, income, home and job to step out in faith to follow Jesus.

Our prayer is that in doing so, God will make our family a blessing to the nations.

[Nathan and Niki McCorkindale and their four children left in October to serve with MB Mission at the Matthew Training Centre in Guadalajara, Mexico, for 9 months.