What's New
Through the conflict, life carries on in Ukraine
A FOCUS on Mission
Must Patience Be So Slow?
Harold Jantz: A Heart for the Mennonite Story
Lorlie Barkman: A Life of Creative Engagement
Last Days, First Days
Women in Ministry: Bertha Dyck
January Moment in Prayer “Holy Spirit—Fill Us!”
The Church as the Patient Body of Christ
Advent: Making Much of Jesus: Christmas Day
Home Arts & Culture Unpunished Christ unsatisfactory 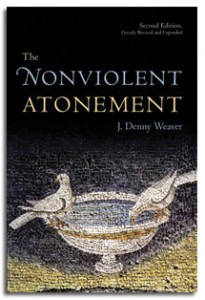 Eerdmans, 2011
362 pages
Even J. Denny Weaver acknowledges that the proposal he makes in The Nonviolent Atonement “may seem audacious.” Weaver is an American Mennonite theologian and professor emeritus at Bluffton University in Ohio. The Nonviolent Atonement is his attempt to describe the atoning work of Christ in light of his conviction that God is nonviolent. For Weaver, there is no place in discussion of atonement theology for the idea that God punished Jesus, or that Jesus died for human sins to satisfy God’s justice.

Weaver’s alternative to traditional atonement theology (epitomized by the 11th-century theologian Anselm) he calls “narrative Christus Victor.” In it, he suggests Jesus’ life, death, and resurrection together comprise his work of atonement through his life of witness to the reign of God on earth. This life, not a vicarious death, was his mission; his death was not the will of either God the Father or Jesus himself. God vindicated Jesus by raising Jesus from the dead, and through Jesus’ resurrection offered humans the opportunity to be transformed by the reign of God and live shaped by the story of Jesus.

The book first outlines atonement motifs and biblical passages that Weaver believes frame the important features of atonement. Then, Weaver lays out narrative Christus Victor, and compares it with other motifs. After three long chapters that compare and contrast Weaver’s ideas with those from black, feminist, and womanist theologies, Weaver engages recent writers on the topic of atonement.

Although Weaver insists that narrative Christus Victor “is an image of the atonement that takes the Bible very seriously,” there is much in Weaver’s project that undermines this statement. First, his core proposal, to bring “biblical and historical insights” together in a “critique shaped by nonviolence to the internal logic of the atonement motifs themselves,” reveals his agenda and the circular logic he brings to his theological work. Throughout his book, he assumes nonviolence as a given, and repeatedly rejects any content that does not accord with his presupposition.

Second, Weaver’s examination of biblical texts is highly selective and often convoluted as he tries to argue that narrative Christus Victor is ultimately biblical. His reinterpretation of texts dealing with Christ’s death for human sin is especially contorted and problematic.

Weaver articulates some good ideas about grounding Christian ethics in the kingdom witness of Christ. But he consistently asserts traditional atonement motifs are incompatible with this exemplarism. Further, his insistence that an ethic of nonviolence must be rooted in the nonviolence of God deviates from Mennonite theological tradition, and reveals Weaver’s truncated view of the Trinity.

Additionally, Weaver spends considerable space reacting against abuses of orthodox theology. Like other theologians he cites, he reads traditional atonement theories in light of abuses perpetrated in the name of religion – which necessarily skews his conclusions and prevents him from articulating, among other things, a robust Christian view of suffering in light of the suffering of Christ.

Weaver’s attempt to redefine atonement theology for the larger Anabaptist community around a core commitment to nonviolence does not accord with traditional doctrine, nor does it attempt to do so. But in his attempt to be truly nonviolent, it seems to this writer that Weaver succeeds only in doing violence to Christian theology.

Living the message of peace in a conflict...

Board of faith and life report, fall 2014

10 steps for expressing the gospel as good...