What's New
A FOCUS on Mission
Must Patience Be So Slow?
Harold Jantz: A Heart for the Mennonite Story
Lorlie Barkman: A Life of Creative Engagement
Last Days, First Days
Women in Ministry: Bertha Dyck
January Moment in Prayer “Holy Spirit—Fill Us!”
The Church as the Patient Body of Christ
Advent: Making Much of Jesus: Christmas Day
Advent: Making Much of Jesus: Fourth Advent
Home News Living the message of peace in a conflict zone

Living the message of peace in a conflict zone 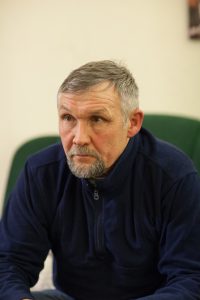 Fedir, a pastor at a Light of the Gospel Church in Donetsk region, in Zaporizhzhia, Ukraine, where he attended an MCC peacebuilding training. MCC photo/ Colin Vandenberg

When armed men arrived at a Light of the Gospel church in the Donetsk region of Ukraine they searched the basement for weapons. There were no weapons; instead one of the men found a file with the names of people the church is assisting.

“He saw that we help veterans, disabled people and large families,” says Pavel, the bishop of Light of the Gospel group of Baptist churches. “I think that touched the hearts of these fighters,” he says. Pavel’s last name is withheld for security reasons.

Light of the Gospel has about 20 churches, some of them in areas where MCC is currently providing humanitarian and other assistance.

In the summer of 2014 a conflict that began in Kyiv spread eastward to the Donetsk area. Pavel calls it a “scary time,” as criminals and people with weapons roamed the streets.

Many residents fled. But Pavel, and many other church leaders, stayed.

“I felt God’s quiet voice saying you have to stay for the Christians and the citizens,” he says. “You had the feeling that your life could end at any time, but there’s also a feeling that God protects and is near.”

About half of the Light of the Gospel churches are now in territory under Ukrainian government control. The other half are in a self-declared independent republic. That’s where Pavel lives; he says the armed groups controlling the area often send people in need to his churches.

“They say, go to the Baptist churches if you are hungry,” Pavel says. “Those people know that we are peacebuilders, people of non-violence.” 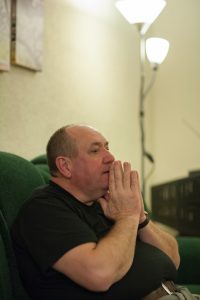 Pavel’s commitment to peacebuilding – and MCC – began many years ago. As a young man, he refused to carry a weapon during his mandatory service with the Soviet army. For many years, MCC supported a charitable organization that Pavel helped establish.

More recently, he has taken part in peacebuilding sessions organized by MCC. The last one, in the fall of 2016, brought together MCC partners to talk about peacebuilding during Ukraine’s ongoing conflict. Andrew Geddert, MCC’s representative in Ukraine, calls Pavel’s participation “extremely valuable.”

“He brings first-hand experience of living and ministering in non-government controlled territory and he represents a group of churches with commitments to a peace position,” Geddert says. “This has been essential to maintain unity between churches on both sides of the front line.”

Fedir, whose last name is withheld for security reasons, lives on the other side of that line; he is pastor at a Light of the Gospel church about 80 kilometres from Pavel’s area. This government controlled territory is home to thousands of people fleeing from the conflict. Fedir’s church provides food, clothing and other necessities to those people.

“We believe in nonviolence, this is our understanding of our faith and we hold to that,” Fedir says. “We are testimony that believers don’t hide in the bushes.”

Fedir and Pavel say the value of that testimony will outlast the current conflict. They say by living their faith during difficult times, they are demonstrating that nonviolence and peacebuilding are the path to reconciliation and unity. 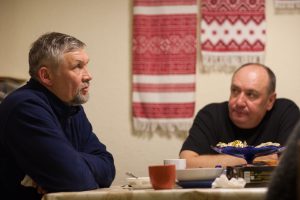 “The fighters haven’t destroyed us because they see we are a peaceful people,” says Pavel. “This is a critically important message. We pray that God will have mercy and give grace to Ukraine so we can resolve this conflict.”