What's New
Through the conflict, life carries on in Ukraine
A FOCUS on Mission
Must Patience Be So Slow?
Harold Jantz: A Heart for the Mennonite Story
Lorlie Barkman: A Life of Creative Engagement
Last Days, First Days
Women in Ministry: Bertha Dyck
January Moment in Prayer “Holy Spirit—Fill Us!”
The Church as the Patient Body of Christ
Advent: Making Much of Jesus: Christmas Day
Home Life & Faithfeature articles Tri-school partnership inked 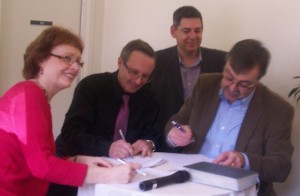 The Mar. 28, 2013, signing ceremony at ETEM-IBVIE celebrated far more than the addition of another Bible school, Institut Biblique du Québec, (IBQ) to the growing partnership. The French language theological school of the Pentecostal Assemblies of Canada (PAOC), IBQ has been operating in the Montreal area since its own formation via school merger in 1997.

“There has been a continued movement of kingdom building across our churches that looks beyond the typical territorial denomination building,” said ETEM president Kristen Corrigan, speaking to the MB Herald before the ceremony began. On this day, even walking with crutches due to “a silly ankle sprain” from stepping off a curb didn’t hamper her enthusiasm.

Corrigan cited an impressive list of collaborative French-language church plants in Quebec where previously denominations had struggled alone to start new works. In many ways, she explained, this increased collaboration between denominational theological schools* was a logical next step.

Aside from the isolating territorial mentality that once existed, one of the greatest challenges in building the church in Quebec has long been the lack of appropriately trained leaders, both lay participants and those in formal ministry positions. In response to that challenge, ETEM, IBVIE, and IBQ’s central commitment (underlined several times during the ceremony) is to theological education that is evangelical, québécois, and at the university level.

Gone is the old idea (once rampant among conservative evangelical groups) that higher education is dangerous or anathema, especially in the training for ministry. Long before Université Laval became part of their joint efforts in 2011, the three partnering schools had all been working toward university-level standards and curriculum. The addition of the world-class university to the mix has formalized and recognized many structures that already existed, and – more importantly for students – has brought more credibility to the credits and programs, and simplifies the process of applying for grants, bursaries, tax exemptions, and other generous provincial government initiatives designed to encourage higher education.

ETEM and IBVIE have essentially been working as a single entity for almost two years (see “ETEM-IBVIE partnership births laughter and new ‘kids,’” February 2013). Accreditation through Université Laval developed after the connection with Université de Montréal ended, and is one more common thread with new partner, IBQ.

As part of the lunch program Midi-Vie where the signing ceremony was featured, IBVIE director and ETEM-IBVIE dean Jean Martin interviewed two official PAOC representatives to explore that group’s motivation to join the partnership.

“Even in their original design [some 50 years ago when PAOC began Bible schooling in Quebec], the courses and the overall curriculum were modelled after the university-level bachelor’s degree approach,” said IBQ president Gary Connors.

Though the link with Université Laval will bring credibility and additional recognition, the day-to-day collaboration with ETEM-IBVIE will have the greater impact on the fulfillment of our mission, he said. Among other things, this means sharing resources – like the growing library – and expanding the course offerings, allowing students to select from courses taught at any one of the three institutions in any given semester.

IBQ dean and PAOC pastor Jonathan Bersot brought an interesting perspective to the discussion. His church in Drummondville recently outgrew its building and purchased one of the larger Roman Catholic churches at the heart of that city. The sharing of duties is not unusual at any of the schools, since most of their staff wear several ministry hats, he said, but the presence of active pastors ensures that even while the new partnerships push developments toward greater academic integrity, the core mission of training lay and professional leaders for effective church ministry remains at the heart of what they do. 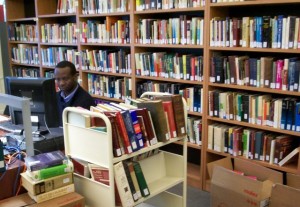 The three core values of the group featured prominently in Corrigan’s presentation to the group, and resurfaced several times during the discussions, even as several addressed concerns about losing important denominational distinctives, an issue particularly important to each group of churches as they train their future leaders. The first two values highlight the need for quality and integrity in evangelical theological education in Quebec delivered collaboratively within the larger family of the evangelical church there; the third value highlights respect for each partner’s particular theology and spiritual culture.

Joel Coppieters is a pastor and writer in Montreal.

For further background on partnership developments at ETEM, see also “Church gives school a shot in the arm,” August 2011.