What's New
Through the conflict, life carries on in Ukraine
A FOCUS on Mission
Must Patience Be So Slow?
Harold Jantz: A Heart for the Mennonite Story
Lorlie Barkman: A Life of Creative Engagement
Last Days, First Days
Women in Ministry: Bertha Dyck
January Moment in Prayer “Holy Spirit—Fill Us!”
The Church as the Patient Body of Christ
Advent: Making Much of Jesus: Christmas Day
Home News Secret list + urgent vision = church launch 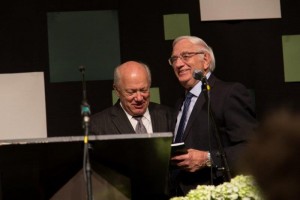 Harry Heidebrecht, Bakerview pastor from 1982–94 and an active member in his retirement, presents the Bakerview anniversary book, Mosaic of Grace, to current Clearbrook pastor Ron Berg. Many speakers at the celebration paid tribute to Clearbrook MB’s generosity and help in planting Bakerview. PHOTO: Jacqueline Quiring

Bakerview MB Church in Abbotsford, B.C., was once just a vision – an urgent sense shared by the members of Clearbrook MB Church in the same district. The story was recounted during Bakerview’s 50th anniversary celebrations.

In the 1960s, Clearbrook leaders recognized it was a period of change. They saw a need: the time had come to start an English-speaking church.

They shared their plan. Those who wanted to start in this new venture would submit their names – in secrecy, so normal Clearbrook life could carry on. Once 100 members had sent their letters, a meeting would be called, and only then would identities of would-be planters be known.

Ultimately, 84 of the 100 formed Bakerview. (The elderly father of present member John Ledsky signed up but died before he could realize the dream.)

The board of church extension (now the C2C Network) assisted with the project.

Bakerview’s first meeting as a church took place Apr. 11, 1965, at nearby Columbia Bible College (then Mennonite Brethren Bible Institute). They continued to meet there until the church building was ready in 1966.

For the Clearbrook church, it was a deep and selfless gift. The church gave up a generation of young people to start the new plant. Additionally, Clearbrook members donated $15,000 (equivalent to $100,000 today) toward the purchase of 10 acres of land for Bakerview’s new building.

Bakerview is a family of God, a true mosaic of grace, said Wally Unger, former CBC president and long-time Bakerview member, during his celebration service sermon. “This is home,” he said. “We love this family.”

“Bakerview has shaped my sense of Christian community,” said Peter Enns, one of 35 original Bakerview members still active in the church. Its impact is “huge on our lives. This is where my faith was nurtured.”