What's New
Leading through the trauma of covid: Part two...
Ask God which town
Where to from here?
CCMBC National Director attends 2022 ICOMB Summit
MCC Canada and MCC Manitoba sell shared property...
The world appears to be growing darker
Sharing a new and unified language
6 reasons to attend the MWC Global Assembly...
One too many
Just one more
Home Arts & Culture Peace heralds and gospel-hope bearers 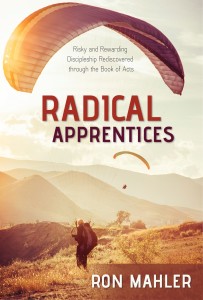 It’s ironic: Christian faith is “shrinking in areas of the world where it enjoys the most privilege,” asserts Ron Mahler in Radical Apprentices – yet in places where it could result in arrest, maiming, torture or even death, faith in Jesus Christ is increasing. This may be a sobering thought, yet Mahler uses this notion as a springboard for advocating that all Christian believers take bigger and bigger risks in sharing their faith, trusting like the disciples in Acts, that the Lord will provide.

A Canadian pastor with more than 18 years’ practice, Mahler brings his experience into engaging with what it meant in the book of Acts to be a disciple.

Radical Apprentices is a response to an increasingly post-Christian world that seeks to remove all influences of faith upon it. Mahler invites his readers to think more like the early church in the book of Acts, a pre-Christian world that knew what persecution looked like.

Step by step, Mahler walks the reader through the entire book of Acts. He divides Acts into several parts grouped together by common themes, and engages each part to coax out the radical truths the disciples exemplify as the founders of the early church. He successfully juxtaposes the postmodern decline in faith with the explosion of growth seen in the early church.

The title Radical Apprentices is aptly chosen as this book has two focuses: how the early church was radical, and how Christians of Acts were the apprentices of Jesus.

For most of the early Christians, being a follower of Jesus Christ was a sure ticket to an early death, yet we see example after example of disciples willing to go to the grave shouting praises to their Saviour, Mahler writes. Not only were these disciples willing to die for their faith, they also showed compassion to everyone, no matter how difficult. They tended the sick, rescued abandoned Roman infants, and performed other humanitarian efforts all in the name of Jesus Christ, acting as the saw their Rabbi and Lord act during his time with them.

Mahler makes it abundantly clear that for the early church believers, there was no plan B. Their only option was to rely on God for everything and trust in his provision for them as they sought to live out lives of radical witness and faithful love. And he urges the reader to do likewise.

What stood out for me was the way Mahler connected each section of Acts with another historical event. Next to the familiar Bible accounts, Mahler places a similar story of Christians who have acted – or failed to act – on their faith and experienced very real outcomes. From his own stories, to those of revival preachers in the 1870s, to stories of persecution from the extremist group called Islamic State in 2015, Mahler draws a vast tableau of Christian faithfulness from then to now. I was struck by his comparison of Saul of Tarsus and Osama bin Laden: both militant and violent gospel-hostile despots. Or Martin Luther’s radical faith in the face of Catholic opposition in the 1600s with that of Paul before Roman officials in the later chapters of Acts.

Couched in his exegesis of the book of Acts, Mahler invites the reader, and by extension the North American church, to be more radical about following Jesus. “We may never have to face gospel-hostile kings, endure the scourge of angry and unbelieving enemies, or even experience shipwrecks, but a lot like Paul and the many faceless, nameless ambassadors and disciples of the early Christian church, we who worship and serve Christ in a post-Christian, postmodern, twenty-first century era must function as heralds for God’s peace and bringers of gospel-hope to a sin-beached world.”

—Stefan Klassen is a member of The Meeting Place, Winnipeg. A graduate of Canadian Mennonite University with a BA in biblical studies, he is currently serving as youth leader and pastoral intern at Crossroads MB Church under MB Mission Central Canada’s TREK internship.

Its nice to move on and preach the word of God all over the world . l want to join the ministry. Thanks.