What's New
Through the conflict, life carries on in Ukraine
A FOCUS on Mission
Must Patience Be So Slow?
Harold Jantz: A Heart for the Mennonite Story
Lorlie Barkman: A Life of Creative Engagement
Last Days, First Days
Women in Ministry: Bertha Dyck
January Moment in Prayer “Holy Spirit—Fill Us!”
The Church as the Patient Body of Christ
Advent: Making Much of Jesus: Christmas Day
Home News Plowshares into swords?

The congregation of Ishibashi MB Church worship together.

Can you imagine Canada having the following article in its constitution?

“Aspiring sincerely to an international peace based on justice and order, the…people forever renounce war as a sovereign right of the nation and the threat or use of force as means of settling international disputes. In order to accomplish the aim of the preceding paragraph, land, sea, and air forces, as well as other war potential, will never be maintained. The right of belligerency of the state will not be recognized.”

For the people of Japan, this question is not a hypothetical argument but instead a reality. Since 1947 the Japanese constitution has included the above paragraph as “Article 9”, the result of the must tumultuous periods of Japanese history in recent memory. Today, as rising international tension on the Korean peninsula and continuing dispute over the Senkaku Islands complicate East Asian relations, many Japanese are now reconsidering Article 9.

The Japanese constitution has never been amended, although the controversial possibility of constitutional reform has been raised several times. Most recently, current Prime Minister Shinzo Abe is proposing changes to Article 96 (which sets the legal process for amendments) and several other portions including Article 9. To most (but not all) of Japan’s Christian community, Abe’s proposals are seen as a threat to Japan’s status as a peace state.

At the beginning of May, 14 Anabaptist and Mennonite leaders cosigned an appeal letter calling on all Japanese Christians to defend Article 9 and the constitution of Japan. The letter begins by quoting Isaiah 2:4 and Matthew 5:9, and argues that Abe is proposing a “change for the worse” according to Christian theology:

“With these developments at a time of unprecedented tensions, we as Anabaptists/Mennonites…are being put to the test. As a historical peace church, now is not the time to close our mouths and keep silent. It is a time to stand up by the power of our Lord Jesus and say that “War is the greatest of sins,” and “We must not open up any path that would cause our country to engage in war again.”

Hironori Minamino, associate pastor at Ishibashi MB Church and academic dean at Japan’s only Anabaptist seminary, is a signatory of the appeal letter. In his opinion, Article 9 has prevented any resurgent militarism in Japan, and influenced the government to pursue other forms of policy.

“The Japanese constitution demands the government [only] avoid using military power,” he explains, “not…take the initiative in making peace, while Jesus calls Christians to be peacemakers in a more affirmative way in the biblical texts. Many Japanese Mennonites and other Christians, however, notice that the avoidance of military solutions is a part of pacifism in the current situation where military forces wield their power over the world. Changing Article 9 means not only that the Japanese people should be involved in wars but also that they will separate themselves from the ideal of peace.”

Minamino also notes that there are important political and economic reasons for preserving Article 9, including unresolved tensions from Japan’s role in WWII, and potential economic damage to Japan’s international trade.

However, not all MB leaders wish to speak out publically “because many MBs in Japan believe that the Christian faith should be separated from actual political matters,” says Minamino.

The MBs who signed the letter did so as individuals rather than as representatives of their churches. According to Minamino, there is a small minority of MBs who support the amending of Article 9 in order to better defend Japan as a nation.

Laurence Hiebert, a pastor who served 22 years with MB Mission in Japan, explains that the original MB missionaries to the island nation were mostly against political involvement because of their theological training. “It would seem to me that the Japanese MB church conference has maintained that position rather than been open to much change in that regard,” he says. 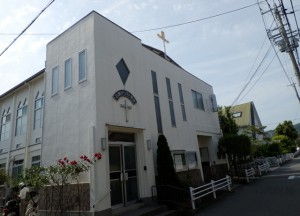 Unlike in North America, Hiebert says, pacifism in Japan is much closer to the cultural norm in both the secular and Christian communities. “Generally, in all of Japan, [people] would be pacifists,” he says, “The wars in the past have left a deep imprint upon their culture, their psyche, and their politics.” In Hiebert’s opinion, the government feels “considerable pressure, particularly from the U.S., to make these changes.”

Minamino and the other signatories have called upon the greater MB and Christian community to pray over Japan and contribute to defending the constitution. Their hope, as they continue to explore concepts of pacifism and non-violence, is that the nation in which they live and worship will continue to contribute to the international community through peace and not military power.

—Paul Esau is a communications intern with CCMBC and the MB Herald. Photos courtesy Hironori Minamino.

Japanese MBs aren’t the first to struggle with the ethics of political advocacy and involvement. Why have MBs historically abstained from politics? In our in increasingly politicized world, is it possible for us to engage effectively and with integrity?

As to the first question “there are some historical reasons,” says Tim Geddert, New Testament professor at Fresno Pacific Biblical Seminary and member of the USMB board of faith and life. “The earliest Anabaptists, by not going along with the state churches of their day were by default automatically excluded from the political process. I think through Mennonite history there’s been a reluctance to participate in a process…associated with military or other violent means of enforcement. And there have been circumstantial reasons for non-involvement [like the restrictions upon German Mennonites emigrating to Catherine the Great’s Russia].”

Yet is political abstinence a historical or theological position for MBs?

Japan’s Article 9 presents an interesting dilemma for MBs because it seems to fundamentally align with our peace mandate and traditions. If such an article could survive in the Japanese constitution for 65 years, should we as Canadian and American MBs be advocating for similar legislation in our nations?

“I’m not a big fan of advocating for things that are completely unrealistic,” says Geddert. “Let’s put our energies into things that could stand some potential for making a difference. I’m a pacifist, but I’m not the kind of pacifist who thinks we should see if we can convince the U.S. government not to have an army. What chance would we have of not being thought of as a laughingstock?”

That said, Geddert added he would probably sign such a petition anyway.

“I don’t think that there’s a great likelihood that a clause like that would ever pass through Parliament,” Cooper echoed the same pessimism from a Canadian perspective.

As for the ethics of political involvement, both men warned of the contradiction of serving two masters.

“Political work is inherently built on compromise, and that doesn’t grasp the fullness of the mandate of the kingdom of God,” says Cooper. “The compromise that is necessary at the political level is incompatible with the gospel at its most basic level. There are tradeoffs that need to be made, and Christians ought not assume that they can make those tradeoffs without changing the nature of what they’re doing if they think they’re doing kingdom work.”

“I follow the argument that John Howard Yoder uses in the little booklet Discipleship as Political Responsibility,” says Geddert. “He basically says, the state has a mandate given by God, and we as followers of Jesus have a mandate given by God and it’s not the same. Our mandate is to overcome evil with good; God never expected the nation to do that. They are required to control evil with limited evil or violence for the sake of stability. We don’t deny the state the right to have a police force just because we don’t think we should be a part of it.”