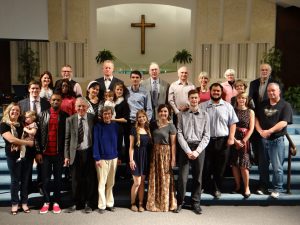 In 2015, our pastor Jedidiah Carpentier asked Janice Penner to start a children’s church program. She laughed, as there were only two school-aged children attending our church at the time. Usually a cheerful volunteer, she was hesitant to get involved. The children’s ministry she’d started years prior had burned out, and it was hard to see this attempt ending up differently.

Jedidiah pushed forward, recruiting his wife Deanna to coordinate the program instead. He convinced Janice to help teach, promising her the program would fill up with kids, but she was still skeptical.

Her hesitancy reflected our general experience at Portage Avenue Church for some time. We didn’t start programs – we let them gracefully die. The church didn’t grow – it shrunk. New things were not happening.

If you attended Portage Avenue Church in the mid-1980s, you might remember a full sanctuary, balcony and overflow every Sunday morning, with a foyer almost too crowded to navigate. But in the decades that followed, the church’s slow, continuous decline left people wondering if the church had a future.

In 2013, pastor George Toews’s sudden illness and death was devastating to the congregation. But on his deathbed, he passionately and joyfully shared a vision for a multi-ethnic Portage Avenue Church.

We had no idea if this vision would ever come to pass, but in the fall of 2015, with our new pastor in place, our leadership took the Focused Ministry program through the MB Church of Manitoba (MBCM). The goal was to come up with a concrete strategy and vision for the future. The result: a multi-ethnic church that worships together in English, while making space for people to worship in their own culture and language.

MBCM executive director Elton Da Silva pointed out that churches of recent immigrants often thrive until their children want to worship in English. At that point, the young people tend to leave.

So, we aimed to help local ethnic churches: we would become a congregation that worships Jesus in multiple languages under one roof, as one body.

Our (“ethnically” Dutch-German-Russian Mennonite) congregation would invite other ethnic congregations to form a new congregation. Multiple services would give everyone opportunity to fellowship, pray and worship in their own language, while a centralized English worship service (with translations offered) would unite the church on Sunday mornings.

It’s been a long journey to put this plan into place, but we took a big step forward on May 7, 2017. That Sunday, we officially merged with Life Driving Church in Canada, a Korean congregation.

Several Russian families, attracted by this vision for a multi-ethnic church, have also begun attending PAC in the last year.

Our long-time members have noticed a huge shift in the spirit and attitude around the church.

“I feel a renewed energy, a sense of expectation and hope for the future,” says long-time member Dorothy Huebert. Another, Kathy Penner observed PAC went from “survival mode” to an outlook of hope and positive expectation.

Dozens of new members have been added over the last couple of years. Nov. 27, 2016, we celebrated baptisms for the first time in several years – and again Apr. 2, May 7 and June 18, 2017. We were incredibly encouraged!

As for the children’s ministry, Janice is happy to report that Jedidiah was right: it quickly grew to the point where we needed to split the children into groups and add more teachers. Three more children in the nursery, and another on the way, assures us that the program will be needed for some time. “I’m humbled by my previous lack of faith,” says Janice, “and excited about moving forward as the program grows.”

Starting a new venture is often energizing, but it’s especially encouraging to have new hope after a long decline. We continue to build bridges with other congregations, and hope to welcome more people into this new vision that God has communicated to us.

What new things might God do next at Portage Avenue Church!

[Susan Huebert and Jeremy Penner are members at Portage Avenue Church, Winnipeg. Jeremy is also the director of worship and media.