What's New
Through the conflict, life carries on in Ukraine
A FOCUS on Mission
Must Patience Be So Slow?
Harold Jantz: A Heart for the Mennonite Story
Lorlie Barkman: A Life of Creative Engagement
Last Days, First Days
Women in Ministry: Bertha Dyck
January Moment in Prayer “Holy Spirit—Fill Us!”
The Church as the Patient Body of Christ
Advent: Making Much of Jesus: Christmas Day
Home MB HeraldColumns Redeeming refugee stories

I was born in the Soviet Union in an area that isn’t fit for human life. A friend recently visited there, and he wrote, “God created central Kazakhstan to illustrate how everything was before anything was!”

The place was so “nowhere,” it’s where the space program was located.

When I looked at my neighbours, there was no one indigenous. Only deportees lived in the city of Karaganda. We shared the official status “enemy of the people”: some Germans, Jews, Crimean Tatars, some from Ukraine when the government found people who weren’t loyal to the Soviet Union.

My mom was taken there as a girl by train. One sister died while they were travelling – she was never properly buried. When the youngest child of such families turned seven, the parents were taken to the labour camp. This happened to my mom. A judge took her in. It was not a sweet childhood, but child labour.

My father was somewhere in hiding with other Turkic people. When Stalin died, we ended up in the northern Caucasus. The language is one of the most complicated languages on earth. I lived there until I was 13, when we were allowed to emigrate to the west.

Years later, after I was a seminary student in Fresno, Cal., I returned home, planting a church. It didn’t happen because I took a missions class. It happened because God redeemed my history. I spoke the (impossible) language! I knew the people.

God redeemed my migration story. I was called back to an area I lived in as a school kid.

God’s hand is in today’s refugee crisis. In fact, we must contend for God’s heart in all of this. How do we know when God is doing something for the kingdom? We

discover it when something happens and it’s an answer to prayer, to a thought, to a longing I haven’t shared with anyone; when an event is orchestrated that I couldn’t have put together; or

even when things are out of control. 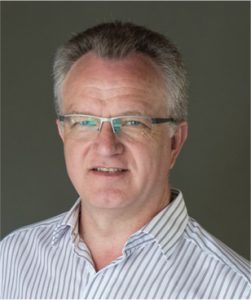 Governments do their thing. They often teach fear to forge loyalty to them alone. Christians believe God is greater. We do not fear. Our security is in God, not border walls.