What's New
A FOCUS on Mission
Must Patience Be So Slow?
Harold Jantz: A Heart for the Mennonite Story
Lorlie Barkman: A Life of Creative Engagement
Last Days, First Days
Women in Ministry: Bertha Dyck
January Moment in Prayer “Holy Spirit—Fill Us!”
The Church as the Patient Body of Christ
Advent: Making Much of Jesus: Christmas Day
Advent: Making Much of Jesus: Fourth Advent
Home Life & Faithinspirational What’s a miracle? 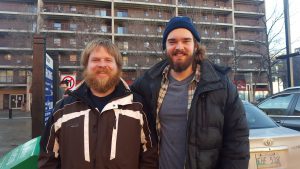 I’m a rocket scientist. Well, not quite, but I worked as an engineer making rockets for eight years. I enjoyed it. But four years ago, I went through a 10-month depression, which left me feeling aimless.

When I saw that MB Mission had a 10-month program called TREK, with an option to go to Thailand, I sent an email that started me down the path God had for me.

Everything began to fall into place. Work gave me a one-year leave of absence; I got rid of my apartment within a week. I felt peace – like I had jumped in a river and was going where the river took me.

Luckiest guy on the planet

April 6, 2017, started out normally. But after washing my face, I couldn’t open my eye. Words came out garbled. Alarm bells went off in my head: “Slurred speech – that’s a sign of a stroke!” I dialed 911.

Doctors determined I had a clot in my brain. Fortunately, my symptoms were minor. The doctors gave me meds and kept me for observation overnight. I was released the next day without restrictions.

For the next week, I felt like the luckiest guy on the planet. My symptoms went away in six days. The more I hear about strokes, the more I see how much God protected me.

A change of plans

In May, TREK began. In the two months of orientation, learning to listen to God, pray, and share the gospel, my prayer life was rejuvenated. Now I feel God beside me. For a month, almost every night, God woke me up to speak in tongues through me.

Because of my stroke, my plans to go to Thailand went out the door. Living Word Temple was looking for someone to join their team reaching out to Indigenous people in Winnipeg’s North End and First Nations communities in the north.

My heart sank. The North End has a reputation as dangerous. I was uncomfortable around Indigenous people. Then one night, the Holy Spirit again woke me to pray in tongues. God was clear that he wanted me to be part of this ministry.

My sense of uneasiness did not go away completely. I felt like Jonah; I had been called to a ministry I did not want to do.

However, when I obeyed God and moved forward into this ministry, God wiped away all these doubts and fears. He replaced them with a new excitement and love for Indigenous people as I listened to their stories.

Doctors estimated she would be in a wheelchair by 65. Because of her back pain, Dorie couldn’t always make it to school.

very other Tuesday, she would go to the doctor to get a note excusing her. The pain was so great, she had to drop out.
I placed my hand on her lower spine, and prayed for God to send his Spirit into her, to fully restore her spine, and take away the pain.

I could see a look of great relief on her face. She told me that during the prayer, her whole body was tingling, and now, the pain was completely gone!

Later that week, I was outside the church when a middle-aged man named Dan* approached me. I asked if I could pray for him.

Sure; he was waiting for a knee replacement. As he walked away, his knee popped several times. The pain went away, and Dan stopped in his tracks. We started praising God together.

That morning, I had prayed for God to send someone who needed prayer, so that I could pray for a miracle. It gets me thinking about what we define as miracles: it is no harder for God to heal someone than it is for God to send me someone to pray for.

Earlier this year, someone prayed for God to give me the spiritual gift of healing. But it’s not my power healing these people. I see it as God just answering prayers.

My prayer life has been completely transformed this year, and instead of being given a gift of healing, God has given me the gift of prayer.

[Justin Dueck is a TREK participant from Winnipeg.
* Names have been changed