What's New
Through the conflict, life carries on in Ukraine
A FOCUS on Mission
Must Patience Be So Slow?
Harold Jantz: A Heart for the Mennonite Story
Lorlie Barkman: A Life of Creative Engagement
Last Days, First Days
Women in Ministry: Bertha Dyck
January Moment in Prayer “Holy Spirit—Fill Us!”
The Church as the Patient Body of Christ
Advent: Making Much of Jesus: Christmas Day
Home News Annual Festival for World Relief raises $1M 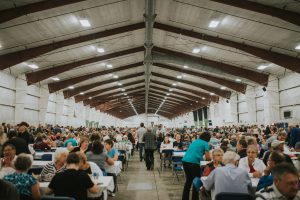 Over 20,000 people pack in to the TRADEX over the weekend. Photo Katrina Grabowski

Some 20,000 people attended the annual MCC British Columbia Festival for World Relief Sept. 15–16, 2017, at the Abbotsford TRADEX which raised more than $1M to support Mennonite Central Committee’s relief, development, and peace work locally and around the world.

Last year’s festival hit this same target for the first time in the event’s history, making it the largest amount raised by any of the 38 MCC festivals held across North America.

Saturday morning, 123 riders of all ages and abilities took part in the Pedaling for Hope cyclathon. It raised more than $220,000 in support of maternal and newborn health initiatives in Afghanistan.

The remaining $1M were raised through food, craft, and booth sales and other fundraising efforts held at the two-day festival and will support MCC’s work with refugees all around the world.

“The Festival has such a rich history and it’s always encouraging to see many volunteers working to make it happen,” says Wayne Bremner, executive director of MCC British Columbia. “It’s a reflection of the generosity of the Mennonite community here in the Fraser Valley and an affirmation that MCC continues to be trusted to help people who are facing conflict, poverty, and disasters.”

The Abbotsford Festival for World Relief, which started in 1970, has grown to become a must-attend event for many in the Fraser Valley each September. Over 1,200 volunteers helped cook and serve a variety of foods, from Mennonite classics like farmers sausage and vereniki to international flavours from some of the 56 countries where MCC is currently engaged in relief, development, and peacemaking work. In addition, volunteers managed craft booths, silent and live auctions, a kids area and more.

“MCC is as busy as ever, with floods in south Asia, hurricanes in the Caribbean, food crises in parts of Africa and the ongoing refugee response in the Middle East as well as other lesser known regions,” says Scott Campbell, advancement director for MCC British Columbia. “The money raised at this year’s festival will go a long way, but much more is needed.”

Since 1920, Mennonite Central Committee, a ministry of Anabaptist churches, has been meeting basic human needs and working for peace and justice. Currently, MCC is working with partners in over 56 countries, as well as with local partners in Canada and the United States, on projects related to relief, development, and peacemaking.

MEI students got talent and generosity