What's New
A FOCUS on Mission
Must Patience Be So Slow?
Harold Jantz: A Heart for the Mennonite Story
Lorlie Barkman: A Life of Creative Engagement
Last Days, First Days
Women in Ministry: Bertha Dyck
January Moment in Prayer “Holy Spirit—Fill Us!”
The Church as the Patient Body of Christ
Advent: Making Much of Jesus: Christmas Day
Advent: Making Much of Jesus: Fourth Advent
Home News Legacy celebrated as new MCC Centre opens 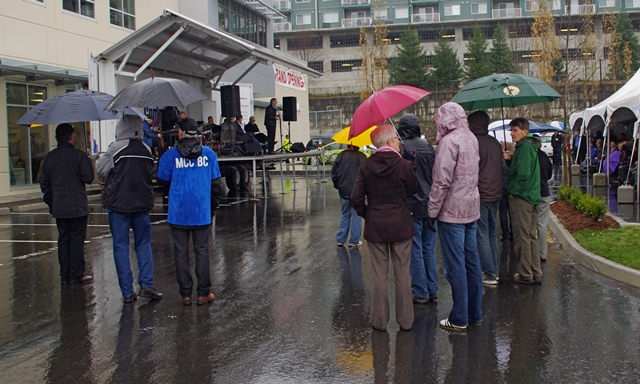 The December rains did not deter hundreds of supporters from attending the official opening of the new MCC Centre in Abbotsford. Tents and umbrellas covered the onlookers as a brief ceremony and ribbon-cutting marked the project’s completion. The centre’s services moved in as their sections in the building were completed, making for a soft opening, and a completed facility to celebrate in Dec. 6 ceremonies.


The new Mennonite Central Committee B.C. headquarters building in Abbotsford, B.C., has been opened officially, with the MCC legacy featured prominently during the ribbon-cutting ceremony. 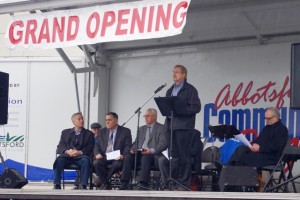 Compared with 2013’s sunny June day when the sod was turned for the new MCC Centre in Abbotsford, the official opening on Dec. 6, 2014 was a touch wetter. Still, hundreds turned out to mark the occasion.

Wayne Bremner, MCC B.C. director, described the new $18-million building as a milestone “building on our legacy of compassion.”

He believes the thrift store on the site is the largest in B.C. He paid tribute to the volunteers who staff it, adding, “These people are the heart and soul and engine of what drives MCC.”

Executive director of MCC Canada Don Peters spoke of MCC’s help to needy people all over the world, and added that the new Abbotsford building is a “house of hope.”

MCC relief kits and blankets will be packed and shipped from the new facility, and funds for support and relief projects will be raised in part from the thrift operations. 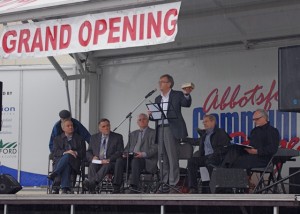 MCC Canada executive director Don Peters holds up a box he was given by a Syrian woman MCC helped during the continuing crisis in her country.

Bremner said literally several hundred people have made capital donations and the fundraising committee hopes that by the new year, they will top $12-million dollars.

Two other participants in the opening ceremonies, trade minister (and local MP) Ed Fast and new Abbotsford mayor Henry Braun, paid tribute to the legacy of MCC, saying their families are in Canada thanks to the work of Mennonite Central Committee decades earlier. 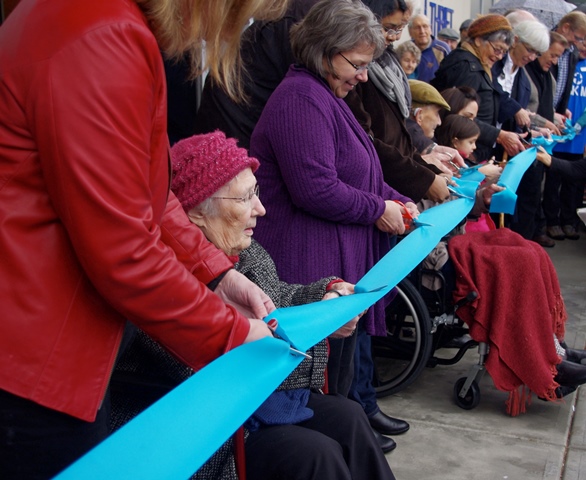 Thirteen people, representing different ages and departments of MCC, cut the ribbon during the official opening of the new Abbotsford building – held outdoors in the rain on Dec. 6. Among the ribbon cutters was long-time MCC B.C. board chair Siegfried Bartel, who turns 100 in January 2015.