What's New
Multiply September Ukraine Updates
Volunteers in B.C. honour Leamington woman tragically killed...
Delete or not to delete, that is the...
Believers bring water for drought baptism
Encouragement to those in the arena
Keeping attention and making an impact: A few...
Open hands to reconciliation
From the editor
Approaching truth and reconciliation with love in our...
MB Seminary offers new MA in Transformational Leadership...
Home News Building and releasing

On June 21 and 22, B.C.’s Mennonite Central Committee celebrated 40 years of thrift stores in British Columbia – then topped it off with a groundbreaking ceremony for a new centre to allow growth of all of its departments. The event coincided with the MCC B.C. annual general meeting held at Abbotsford’s Central Heights Church.

The weekend began with a celebration concert, attended by more than 1,000 people, featuring singer-songwriter Brian Doerksen and male quartet the Ambassadors.

Following the annual general meeting on Saturday morning, the focus shifted to recently-purchased property on Gladys Avenue in Abbotsford for a barbecue and groundbreaking ceremony.

The first fundraising goal of $10-million was met on time, so everyone was invited to bring a shovel and participate. Master of ceremonies board vice chair 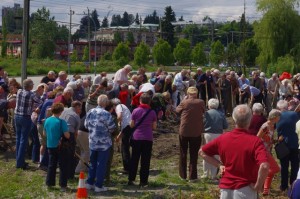 Groundbreaking for the new MCC building on Gladys Avenue in Abbotsford.

Ernie Schmidt commented, “If you dig well, we can save money on excavation!” A donor (Home Hardware) provided shovels, complete with small plaques to mark the occasion.

Prior to the digging, longtime MCC volunteer Siegfried Bartel, 97, prayed that God would bless the work on the new site. And on completion of the groundbreaking, MCC released live doves – a symbol of Mennonite Central Committee’s work around the world.

Because the first fundraising goal was met, construction and site preparation will begin this summer. Meanwhile, the second fundraising phase has been launched for another $5-million so the centre can operate mortgage-free. At the $10-million donation level, mortgage payments will be roughly equal to current rental costs. Executive director Wayne Bremner said, as donations increase, MCC will build its assets even more. 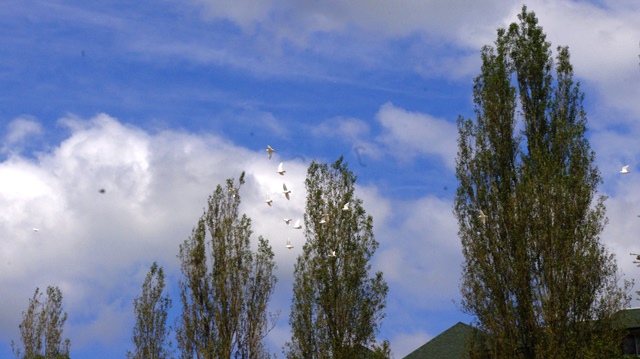