What's New
Believers bring water for drought baptism
Encouragement to those in the arena
Keeping attention and making an impact: A few...
Open hands to reconciliation
From the editor
Approaching truth and reconciliation with love in our...
MB Seminary offers new MA in Transformational Leadership...
Multiply August Ukraine Updates
Book Review of Return Stroke: Essays & Memoir...
The wake I make
Home News Building and releasing 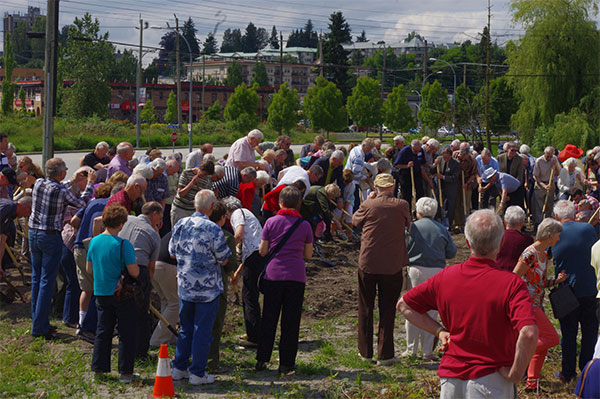 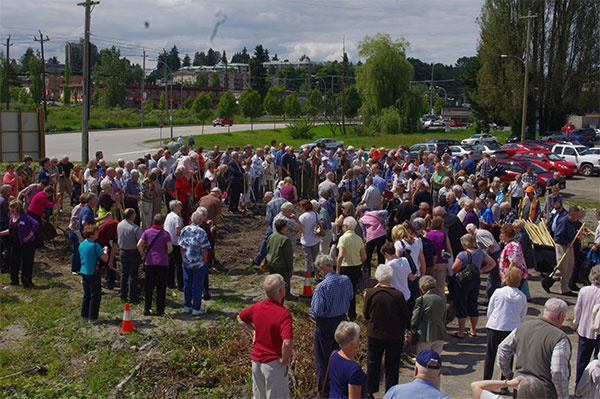 Mennonite Central Committee in B.C. is celebrating two milestones this summer – a successful effort to raise $10-million for a new building, and a 40th anniversary for MCC thrift stores in the province.

The fundraising success makes possible a summertime start of construction on a new facility in Abbotsford. Many of the MCC operations in southern B.C. are cramped for space, working in many cases out of rented facilities, says MCC BC executive director Wayne Bremner. The new Abbotsford building is designed to remedy the crunch, providing 80,000 square feet of space for MCC’s B.C. operations and shops. The project will also add financial resources to MCC’s funding for relief and development operations by ending the annual outflow of $350,000 for premises rental. Instead, says Bremner, more operational income will build equity and free funds for ministry.

The new facility includes space for a major thrift shop and used furniture store. It will give adequate warehousing space, bigger furniture repair facilities, room to package international relief and aid materials, room for Ten Thousand Villages, a centre to produce quilts for sale, Mennonite Foundation offices, and MCC BC office facilities. Bremner says there is space on the land for a second building in the future.

The second phase of fundraising for the centre has begun. When its $5-million goal is reached, the new building can become mortgage-free.

Hundreds of supporters and volunteers were on hand June 21–22 to celebrate the building landmark and its companion occasion, the 40th anniversary of B.C.’s thrift shops. The event coincided with the MCC BC annual general meeting held at Abbotsford’s Central Heights Church. 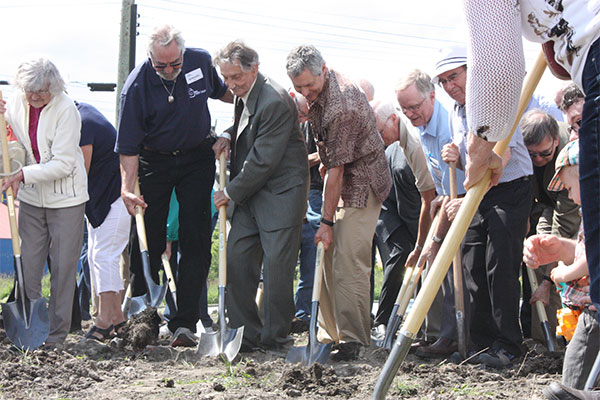 Hundreds turned out for MCC BC’s groundbreaking celebrations on the site of the new MCC Centre in Abbotsford, B.C. Siegfried Bartel, 97, long-serving former MCC BC board chair (centre), and his sons Reinhard (left) and Martin (right) were among those who dug in. Bartel also offered a prayer of blessing for the new project.

The weekend began with a celebration concert by singer-songwriter Brian Doerksen and male quartet The Ambassadors, attended by more than 1,000 people. The evening included a tribute to 999 volunteers. A video honoured more than 100 who have worked regular thrift store shifts for more than 20 years. The thrift shops, last year alone, raised $1.5-million for MCC relief and development work worldwide. Doug Willms, coordinator for B.C.’s 10 thrift shops, said, “It is so remarkable that we have such a faithful, dedicated group of volunteers.”

Executive Director Tom Peters of MCC Canada was present, as were representatives of both BC Mennonite Brethren and Mennonite Church BC. Salvation Army Council chair Bob Singleton and directors were also present at the ceremony, along with Ward Draper of 5&2 Ministries, and city councillors. Abbotsford mayor Bruce Banman paid tribute to MCC’s “vision and compassion”, adding, “You still keep growing, finding more to do.”

Following the annual general meeting on Saturday morning, the focus shifted to recently purchased property on Gladys Avenue in Abbotsford for a barbecue and groundbreaking ceremony. Master of ceremonies, board vice chair Ernie Schmidt, said because MCC depends so greatly upon its volunteers, everyone was invited to break the ground for the new building. “If you dig well, we can save money on excavation!” A donor (Home Hardware) provided shovels, complete with small plaques to mark the occasion.

Longtime MCC BC board chair Siegfried Bartel, 97, prayed that God would keep the construction workers safe and would bless the labours of MCC. Completing the groundbreaking ceremony, MCC released live doves – the symbol of Mennonite Central Committee’s prayers reaching the heavens. MCC’s logo, a stylized dove and cross, is recognized around the world.

Bremner says the weekend was a great celebration. “We were so honoured to have so many people come and share with us.”