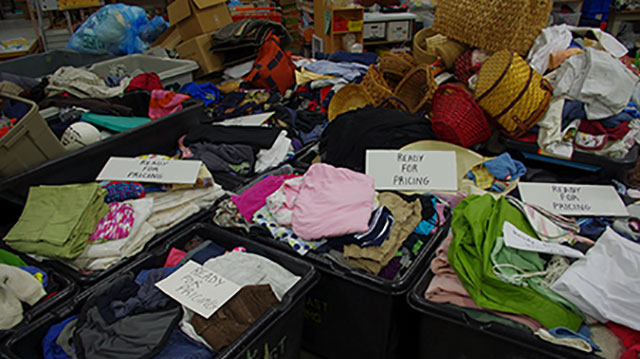 Olwyn “Pi” Irving loves thrift. The Mennonite Central Committee thrift store volunteer is amazed by the “river of stuff” that flows into MCC’s Abby East shop from hundreds of donors. 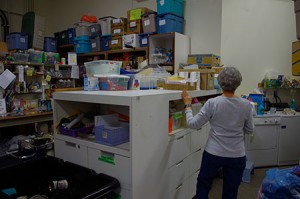 Pi Irving loves the challenge of identifying and pricing collectibles. She is pictured in her old space.

Over the last 10 years of MCC thrift work, Irving has developed an expertise in collectibles and housewares, her niche. Her fingers fly over her iPad, searching eBay and other sites to help determine a price. Normally, items at MCC go for about a third of their official value.

“Think where we would be without thrift,” Irving says. “If you break a lid on your CorningWare casserole, you can’t get just a lid at a store. You need to come to a thrift shop.”

In B.C., on a typical day, 500 people will buy something at one of  MCC’s thrift stores. Last year, those 10 stores netted $1.5-million to pay for ministries in B.C., across Canada and in some of the poorest countries in the world.

Irving is one of more than 3,000 B.C. volunteers who form the backbone of Mennonite Central Committee. Like other volunteers, she “owns” her work and takes pride in the dollars MCC’s stores provide to communities around the globe.

In the past, MCC helped many of the volunteers or their families get to Canada and settle into a new life. Their work at the thrift stores gives them a sense of paying back, says Irving. Other volunteers simply like helping in a worthwhile enterprise and enjoy the camaraderie. 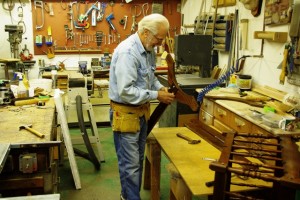 Hank Thiessen and most of the volunteer repair teams at the East Abbotsford Thrift store will move into the new building. And they will bring their “scrounged” repair parts with them.

Furniture repair specialist Hank Thiessen is not surprised by the number of people who comprise the “staff” at the thrift shop. “If the payback in satisfaction weren’t so high,” he says, “there would probably be fewer of us.”

A retired social worker, he is proud of what he can restore for the sales floor. Thiessen started with MCC in Ontario, then in 1997, became a volunteer at Abbotsford’s Furniture and More.

He is especially proud that MCC finds ways to recycle what can’t be sold or repaired – like stripping insulation off copper wire from kettles that can’t be fixed. “Insulated wire may bring a nickel a pound, but stripped wire is worth more than 30 times that,” says Thiessen.

Volunteers strip the webbing from unfixable outdoor furniture and sell the aluminum for scrap. “And we hardly ever buy anything to do our repairs,” he boasts. 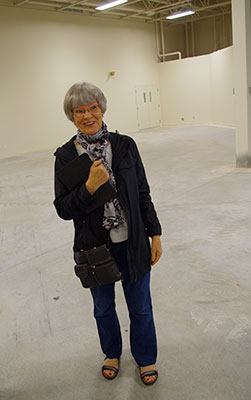 Thiessen looks forward to having more space in B.C.’s new MCC Centre on Abbotsford’s Gladys Avenue, due to open officially on Oct. 25. The new building will provide more space for display (35,000 square feet for clothing, furniture and sundries), work and storage.

Like Thiessen, Irving can hardly wait to see the new building up and running: “I want our work area to be clean and organized. I don’t want us to be tripping over each other.” Their current work space is limited.

B.C. MCC executive director Wayne Bremner calls the Centre “purpose-built” to create maximum efficiencies and reduce labour. Gladys Avenue will also accommodate a new Ten Thousand Villages store, a workshop and retail area for quilters and a café under the same roof. It will include MCC B.C.’s material aid resource centre for shipping donated items overseas. A suite of offices will house the administration and MCC program components. There is even provision for thrift donors to leave their goods under cover at the drive-through drop-off station.

The Gladys Avenue building will allow those former rent monies to go toward paying down a mortgage. It will also reduce costs: Abbotsford’s east-end MCC thrift store and the separate furniture store, both significant revenue-producers, together pay $360,000 per year in rent. Now, more of the income can be directed to MCC work, says Bremner.

About two-thirds of MCC’s revenue goes to development and relief needs overseas. The other third funds housing programs (including intensive work with the homeless), counselling assistance to end domestic abuse, a “rent bank” program and employment agency work including the MCC landscaping division and training programs. 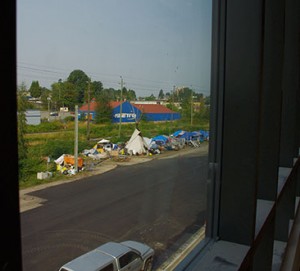 Just across Gladys Avenue from the MCC Centre is a tent city occupied by people who are homeless. Some criticize MCC for constructing a building rather than helping the homeless, but Bremner says MCC has actively (and without fanfare) been working on poverty issues for more than a decade. In recent years, it has been doing one-on-one casework.

MCC is also active on the Abbotsford Mayor’s Task Force on Homelessness and has supplied research to the cities of the Fraser Valley Regional District, says Bremner. 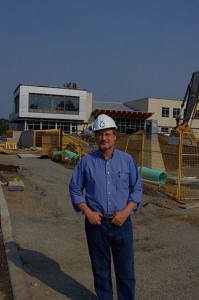 Wayne Bremner, MCC B.C. executive director, is pleased with the new building that will centralize the organization’s Abbotsford thrift operations and administration.

The project site used to be an abandoned strip mall. The 8.5-acre parcel now contains the main MCC building, parking facilities and a 40,000 square foot “legacy” office building, already 82 percent rented out. The Salvation Army’s Abbotsford facilities are neighbours down the road, and two other office structures complete the string of new or redeveloped properties on Gladys Avenue.

Gifts to the B.C. headquarters project have been generous so far, says Bremner. Most of the financial donors come from Mennonite and Mennonite Brethren communities who have given or pledged $11.1 million, a figure Bremner hopes to see at $12 million by year end. The overall fundraising target to be debt-free is $15 million.

Meanwhile, volunteers like Irving and Thiessen eagerly await a new chapter in their ministry at the new site. 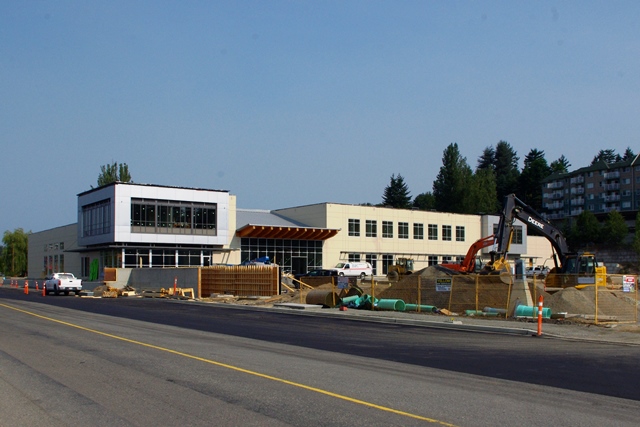 The Gladys Avenue MCC Centre under construction at press time. 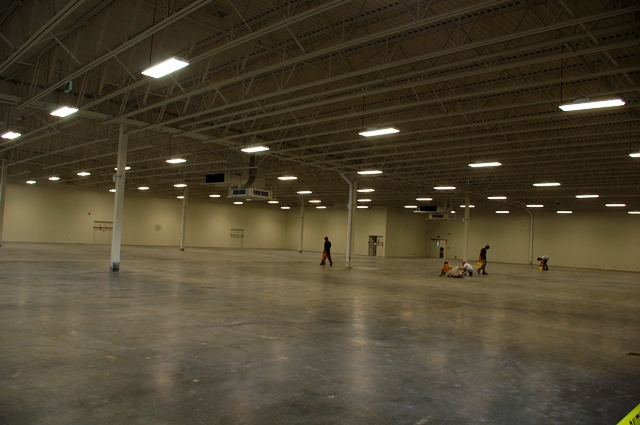 The capacious sales floor of the Gladys Avenue MCC Centre, under construction at press time. 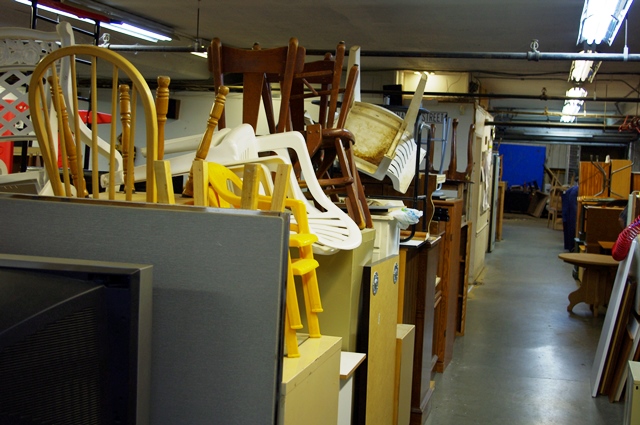 The cramped sorting area at the old building. 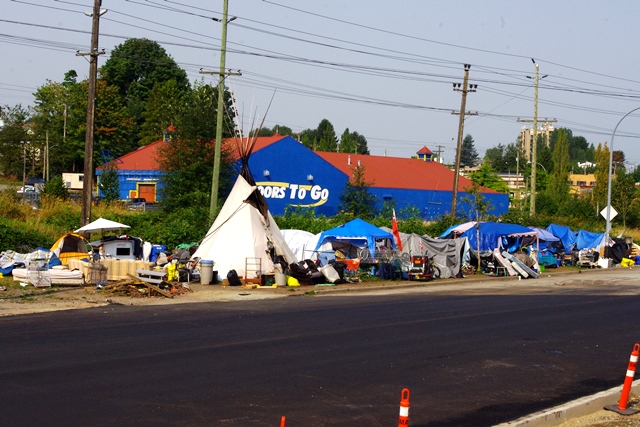