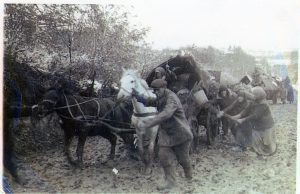 From 1943–1945, thousands of Mennonite refugees attempted to escape the Soviet Union for the West in a migration known as the Great Trek. PHOTO: MAID CMBS NP128-01-20

Following severe persecution during the 16th century, many Mennonites eventually found a place of refuge in Prussia. Here they prospered until some of the privileges granted to them were threatened during the mid-1600s. Then, at the invitation of Catherine the Great in 1789, many moved to Russia, settling In colonies across Ukraine. They developed an agrarian, village way of life, generally isolated from the larger Russian culture.

Their village and church levels of government worked in close partnership, creating, rather ironically, a union of church/state not unlike the situation rejected by their 16th century predecessors! The Mennonite church now had to deal with the problem of nominalism (cradle Mennonites): everyone had to join the church in order to be married, but not everyone who joined the church was a person of faith. Mennonite church leaders became increasingly concerned about the sinful behavior of some church members.

People began meeting in homes for Bible studies, where they wrestled with the question of salvation, assurance and consistent Christian living. One congregation in the Molotschna area that had been deeply influenced by German pietism was especially significant. in this renewal movement. It was not long before revivals began to take place in several colonies.

Tensions escalated between Mennonite church leaders and house church leaders and in January 1860 a number of house group families drafted an official document of secession, which marked the beginnings of the MB church. It condemned the Mennonite Church. (Relationships were “frosty” between these groups for many years.)

Despite certain stigmas (such as attitudes of spiritual superiority, insistence on baptism by immersion, the exuberance movement), the MB church gradually grew. By the 1920s, MB membership made up about 25 percent of Russia’s Mennonite population.

The end of the 19th century and beginning of the 20th were prosperous times for Mennonites in Russia. But World War I, the Bolshevik Revolution in 1917, a terrible famine in the 1920s, Stalin’s program of forced collectivization, and World War II, unleashed storm after storm upon them. Many Mennonites tried to escape (to Europe, North America, South America), some decided to wait it out, some tried to protect their villages by organizing self-defence units. Those who were unable to leave Russia were eventually dispersed into Soviet collectives. Many died in Siberia. The Mennonite churches were essentially dismantled.

It was not until the late 1950s that Mennonites were once again given permission to organize a congregation in Russia.