What's New
Through the conflict, life carries on in Ukraine
A FOCUS on Mission
Must Patience Be So Slow?
Harold Jantz: A Heart for the Mennonite Story
Lorlie Barkman: A Life of Creative Engagement
Last Days, First Days
Women in Ministry: Bertha Dyck
January Moment in Prayer “Holy Spirit—Fill Us!”
The Church as the Patient Body of Christ
Advent: Making Much of Jesus: Christmas Day
Home Life & Faithfeature articles MB history tour: Chapter Four

A global multicultural community of faith 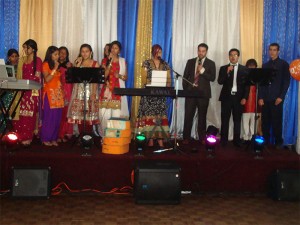 People still sometimes associate the label “Mennonite” with the German language,certain foods or specific surnames. While German-Russian ethnicity was the cultural conduit through which Mennonite Brethren came to North America, it is entirely Inappropriate to equate the term Mennonite with only one ethnic group. The Mennonite Brethren have become a global multicultural community of faith.

The legacy of a long missionary commitment

It was a passion for-mission that served, despite controversial issues, as one of the denomination’s most important, unifying forces. North American MBs supported missions with money and personnel during the 1880s, and formally organized a mission board in 1900. Historic mission fields were India China and Congo. The number 0 missionaries increased dramatically from 43 in 1940 to 256 in 1960. Mennonite Brethren Mission and Service International (MBMSI) is no longer only a North American sending agency, but is interested in global partnerships.

The membership of MB churches in countries such as India (100,000 in 840 congregations) and Congo (90,000 in 468 congregations) outnumbers the total MB membership in North America.To facilitate interaction among the various national conferences, the International Committee of Mennonite Brethren (ICOMB) was formed in 1996.

During the last 30 years, the denomination has been joined by congregations from many different immigrant groups.

Within many MB churches there is also broad cultural diversity, facilitated by intentional and aggressive efforts at expansion, such as the Key Cities Initiative.

We are now a multicultural denomination, with services in 1 7 languages across Canada. This comes with challenges: new immigrant groups face cultural transitions and inter-generational conflict; denominational leadership does not yet show this same cultural diversity; some of the immigrant groups are discovering areas of theological variation.

As for the perpetual search among MBs for an “identity,” it would be foolish to deny that MBs are an integral part of the evangelical Protestant mosaic, and that they bring a distinct flavour to this mosaic. It would be foolish, too, to argue we do not have a dual identity. The term Evangelical-Anabaptist is an accurate historical and theological description.

Our dual identity provides a vantage point from which to critique both (or more) traditions that contribute to our sense of identity. It serves as a useful lens through which to see how different cultures have shaped our theological traditions. It places US-in a unique position to respond to post-Christian, postmodern culture.

The next chapter is yet to be written. It will be exciting to see how God will use this church community to extend the work of His Kingdom in the future.

What will the next generation say about us and our contribution?