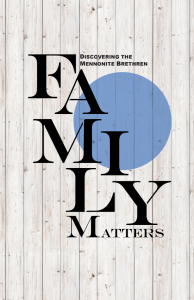 Commissioned by the Board of Faith and Life, the 2017 revision of Family Matters is a book I’d gladly put in the hands of anyone in our church to acquire a better sense of how each person and congregation fits into the greater whole of the MB movement.

The editors acknowledge the original writings of Lynn Jost and Connie Faber in 2002, who in turn composed their work based on the earlier writings of Katie Funk Wiebe. It would be well to think of Family Matters as a living document that will, in our digital age, change as often as we do.

There is much to praise and be thankful for in the revision. The font and typeset is easier on the eyes. The table of contents is clearly laid out and easy to follow. This volume includes an updated Recommended Reading list and a challenging epilogue that speaks of the challenges that lie in our future.

The revisionists created a uniquely Canadian document with British rather than American spelling, Canadian stories replacing American ones, with specific reference to, and perspectives from, the history and development of the provincial, Canadian, and international MB family and its spiritual cousins. Statistics are updated up to and including 2017. Recent ministry and mission developments are acknowledged.

While retaining the narrative approach and stylistic flow of the earlier work, the 2017 editors nuanced the content to be more in keeping with current readers’ vocabulary and terms of reference. Not surprisingly, the editors provided only slight modification to earlier chapters dealing with Anabaptist and MB origins. However, as one proceeds through the chapters, there is more and more revision, including whole sections and one chapter of completely new material.  All of it is welcome.

Welcomed into a story

Amid the sizeable differences, there are also smaller ones, only one of which I’ll make mention. In 2002, we are referred to as MBs; in 2017, throughout the book we are Mennonite Brethren.

Reading the revised version alongside the original made it clear what the editors added as well as deleted. For instance, the editors introduced a third aspect of Christ’s atonement: “Mennonite Brethren understand Jesus’ atoning death as the payment of the death penalty by the innocent victim, as Christ’s defeat of the enemy at the cross and as a model for how Christians are to live” (34). This will be significant for certain readers.

The addition of many wonderful Canadian stories personalized the book in a surprising way for this Canadian reader.

Also notable were the deletions – particularly of the church planting ventures that emerged out of the Key Cities Initiative, especially in Alberta and Ontario, that in the end had little to show for all the effort.

While there were many things that were changed, some aspects unfortunately were held over that also could have been removed. For instance, more and more of our churches conduct weekly observance of the Lord’s Table, yet the editors held to the earlier version’s language, that we “have shied away from weekly participation lest the event become superficial and hurried” (35). Perhaps the truthfulness of this could be weighed in the next revision.

The editors no doubt made some tough calls regarding eliminating good stories. One example is in chapter 7 “Disciples Are Missionaries,” where Bryan and Teresa Born’s dynamic mission work in Botswana from the 2002 version is replaced in 2017 by a terrific story from Terrebonne, Que., of Véronique Beaudin’s conversion and leadership development (45).

In the same chapter, the editors’ choice to include MB Mission initiatives in Africa, Asia, and the Turkic world make up for the elimination of other dated stories.

In Chapter 8, “Working Together,” the editors highlight the effort of national/provincial leaders to intentionally align ministries to avoid duplication of efforts. The chapter speaks to the establishment and role of our schools, CE, youth ministry, camps, and publications.

While the aim of this chapter is to share information, for those unfamiliar with the MB family, there is introduced a dissonance and, for those familiar with our past, a nostalgic sense of loss.

Much of what in one season of our existence was considered essential to our peoplehood has become unimportant, inconsequential, obsolete, or outsourced. We are no longer who we once were and, more importantly, who we say we still are. This is part of the normal maturation process of any body.

That said, courage is required “to know thyself,” especially when that self has changed from yesteryear. There is much to celebrate in the Mennonite Brethren. There is equally much to grieve.

This chapter could have provided reflection and analysis on our experience, especially in light of the gold nugget quote from J.B. Toews who insisted, “The Mennonite Brethren Church, with a world-wide constituency in an age of religious pluralism cannot continue to sustain itself with an implicit, experiential theology” (53).

Chapters 11 and 12 on “The International Family” and “Inter-Mennonite Connections” are outstanding. The updated reports and statistics are particularly encouraging. They supply the reader with a holistic understanding of the global people we belong to. The tone and scope of chapter 11 regarding ICOMB is particularly rewarding. It is an incredible testament of God’s blessings since the original version of Family Matters in 2002. We have so much to be thankful for.

“As we’ve seen, the MB narrative began with – and continues to be shaped by – invitational evangelism, church revitalization, radical disciple making and Christian mission to people who feel marginalized” (68). The sentence is symptomatic of two conversations that are needed in the MB conference.

First, what do we mean by “radical”? Disciple making is itself already a radical act in a pluralistic society like Canada. I think we get ourselves into trouble by the arbitrary and popular use of adjectives like “radical” without any basis upon which to make such an assertion. Linguistically, it cheapens rather than enhances our discipleship.

Second, I would suggest there is a categorical distinction between those “who feel marginalized” and those who are marginalized. Which is it? The former could include those with a victim complex, who are sad and alienated from family and social structures of meaning. The latter can include those who actually are displaced: Indigenous populations, international refugees, those who are castigated because of their sexual orientation. Clearer language may serve in strengthening strategic ministries.

There is also reference to the 2011–2012 National Office Review and the unnamed Mochar Report (68). Correctly, the editors have signalled to the readers that this was driven by the Executive Board and that what emerged was essentially an overhaul of the national ethos and programming without consultation with or reference to constituent churches.

Quite naturally, first-time readers with little knowledge of the Mennonite Brethren who were earlier introduced to the idea of a community hermeneutic might conclude the direction/priorities/mission/vision of the denomination is driven by executive order. They would be correct in their discernment. What happened to the covenant community?

The irony is that after all the expense and fluster of the Mochar report, the four essential services of the CCMBC have remained the same, despite semantics, as they stood back in the mid-90s. So the question might be raised, “Is the new paradigm really new; really a departure from an earlier trajectory as the book intonates?”

The concern above (68) is found in the misnamed chapter 10, “The Ministry Model of Canadian MB Churches.” This chapter represents perhaps the greatest exertion to articulate (defend) the prerogatives of the recent and current leadership in the national office. Simultaneously, it misleads readers into thinking that Canadian MB churches have a ministry model. We don’t.

Chapter 10 is not about Canadian MB Churches. It is about the self-assertions of the Canadian MB national office and its component ministries. These are two separate realities and should not be confused.

The 55,000+ people of our Canadian MB churches represent a wide mix of ethnocultural origins with distinct social, spiritual, theological, and economic placement within our society. While embedded and devoted to their local congregation, the majority of Canadian Mennonite Brethren have scant knowledge of the existence or operations of the national office and its component ministries.

A time for honest reflection

As expected in a book about family matters, there is an emphasis on the CCMBC national office structure’s achievements. However, readers instinctively know that all families are laden with misadventures, mistakes, failures, and things we’d prefer to keep in the closet. This would have been the place to confess and come clean on some of these matters and disclose our sins and idolatries. Such a disclosure would have lent greater integrity to our reputation.

In chapter 10, there is reference to what is new, rather than what has stood the test of time; to church planting rather than churches that have miraculously survived and thrived despite the expiration of original leaders, despite successive congregational cultures over the years. The 10th chapter is more an infomercial on the national structure than an indicative pulse of who Canadian Mennonite Brethren are.

That demographic, theological, and spiritual analysis is the piece that is actually interesting, provocative, and worthy of our attention and, for the most part, is precisely what is missing. Chapter 10 supplied us with a ministry model of the national office, but denied readers an honest reflection of our identity.

With all that said, however, this volume is a valuable installment. I would humbly submit that all current and future members and attendees of MB-affiliated churches would benefit from reading this book because family matters.

[Ken Peters has pastored Saanich (B.C.) Community Church since 2010. A past member of the Board of Faith and Life, Ken holds an MDiv from MB Seminary and a DMin from Carey Theological College, Vancouver. He and his wife Yvonne live in Brentwood Bay, where he enjoys gardening, canning, cooking, and cycling.

So enjoyed reading an honest review of “Family Matters” by Ken Peters which is essentially, an honest review of the life of Mennonite Brethren in Canada in the last 15 years. There is much to learn and to learn from here. Thanks, Ken. Helen Rose Pauls, Sardis Community Church