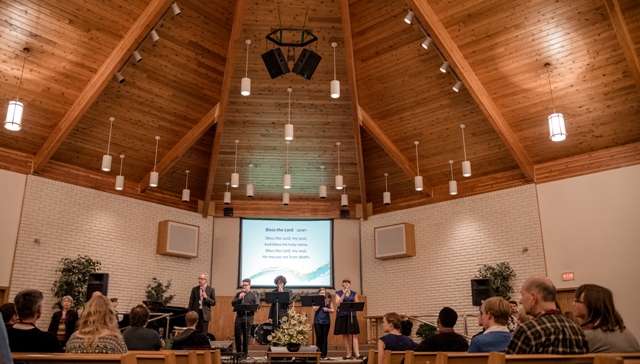 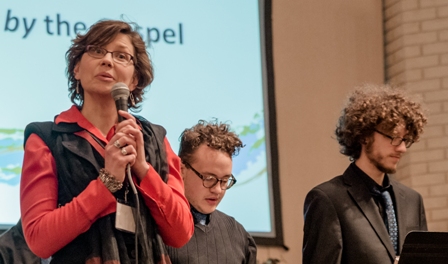 Speakers delve into the heart of the gospel

Friday afternoon keynote speaker MBBS president Bruce Guenther defined the gospel as “the story of God’s interaction with humanity from creation to consummation.” In contrast to the proliferation of books that truncate the gospel to the cross, Paul’s use of “Christ” – meaning the expected anointed one – to explain the good news (1 Corinthians 15:4) was his signal the gospel didn’t begin with the story of Jesus. 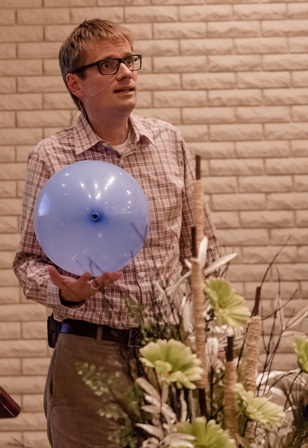 Speaking on the Good Samaritan in light of the Mary and Martha story that follows, Victor Neufeld, pastor at North Kildonan MB Church, Winnipeg, said when we try to guilt people into love, “we get as bitter as Martha and start looking down on the ones chilling at Jesus’ feet.”

“If there’s a hero in the story, it’s Jesus. He’s the good Samaritan,” said Neufeld. “The gospel starts with you half-dead at the side of the road. The one coming down the road who can save us is the one we’ve mocked all our lives. After that story, love doesn’t sound like a command; it’s a response.”

Saturday morning, Brian Cooper, board of faith and life chair, and associate dean and assistant professor of theology at MBBS-ACTS, spoke on “living for the least, the last, and the lost.”

After the Rodney King affair, Christians urged L.A. pastor E.V. Hill, “You gots to feed ’em, Dr. Hill” while others said, “You gots to win ’em, Dr. Hill.” “I’m here to contend,” said Cooper, “that nowhere in Scripture are we told to separate people’s souls from their bodies. Worship of God touches bodily needs because matter matters.”

Panelists put the gospel in context 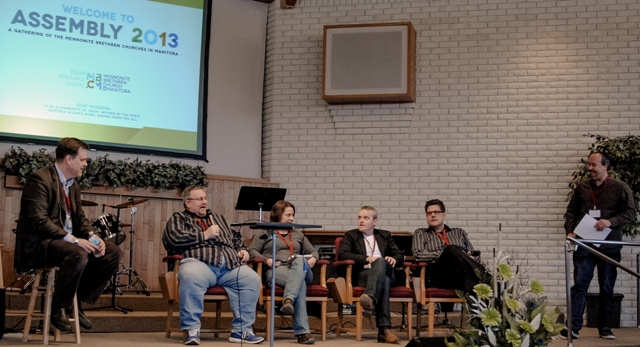 In response, a panel of pastors – Roger Thiessen of FaithWorks, Ruth Schellenberg of Fort Garry MB, Phil Vallelly of Winkler MB, and Dave Ens of Eastview Community and its downtown campus One88 – were interviewed by CMU professor David Balzer about how to live the gospel in their contexts.

Schellenberg said Fort Garry’s children’s ministry is about more than presenting information: it’s passing on faith. “As adults, we don’t have all the answers. We need to let the children see themselves in the story.”

One88 and Winkler (Man.) MB find ways to live the gospel in very different contexts: Winnipeg’s inner city and the “buckle of the Bible belt.” Ens said he meets many people “who want to get back on their feet” after leaving the Remand Centre but find “the only community they have is the one that got them into trouble.” They don’t need another program, so One88 offers the essential in all our lives: healthy community. “How do you categorize who is lost and broken?” Ens wondered, adding, “Perhaps, that’s us too.” Winkler MB meets the needs of hurting people through their family resource centre that offers parenting and nutrition classes.

From the floor, River East MB moderator Gordon Matties told of an acquaintance who cried, “God, are you there?” and felt a deep sense of love. Matties said, “I wonder if our insistence on deserving to die could be balanced with deserving to be loved.” 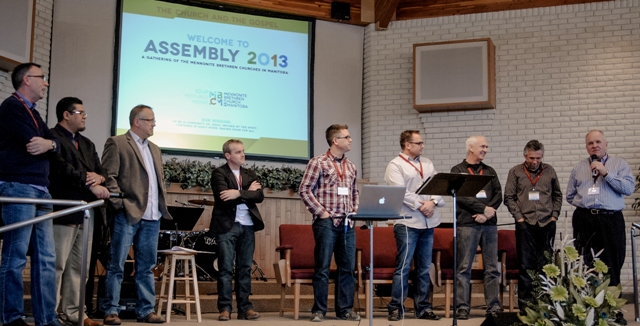 In the business session, provincial executive director Elton DaSilva and moderator Harold Froese presented a church planting proposal that would see the province officially partner with the C2C Network. The proposal calls for the creation of a leadership team that will report to the Manitoba executive director, and a C2C work team.

Delegates voted in favour of the recommendation to “affirm the direction of this church planting proposal,” which Froese said will “allow us to work together more closely” across the Prairie provinces. 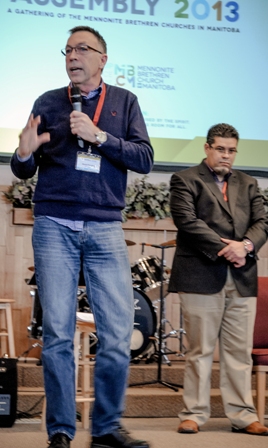 To La Salle pastor Ray Klassen’s question about systems for existing churches, Fleming responded, “Missiologist Bill Hogg’s full-time role is to work with existing churches to talk about how to

Matties expressed appreciation for MBCM’s Ministry Focus, which states, “We hear God calling us to compassionately minister with and among people who are poor and to initiate the emergence of new Christ-centred faith communities.” “That we’d bring the two together is my hope,” he said. “How will C2C help us carry out one and two?” 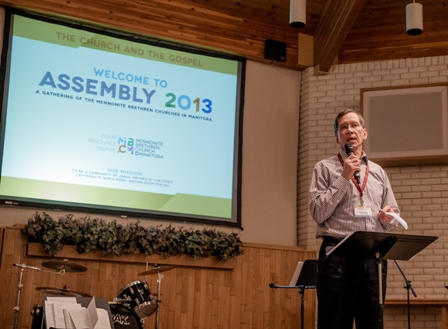 • Fred Pauls was introduced as the new principal of MB Collegiate Institute.

• DaSilva asked for feedback on how to engage single-ethnic churches coming into the conference.

• National leadership development director Ron Toews announced his plan for an “online TransCanada highway” where pastors and coaches can meet together to pray and share ideas. 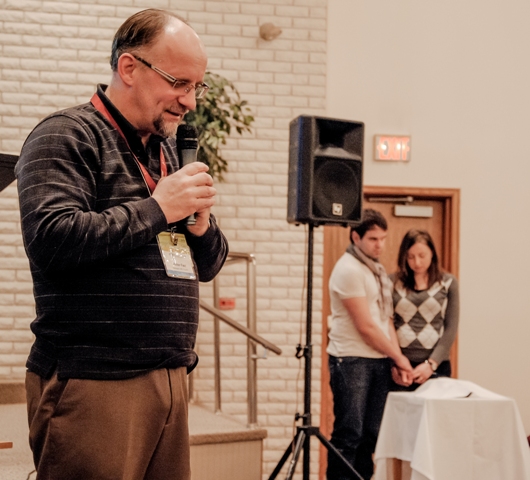 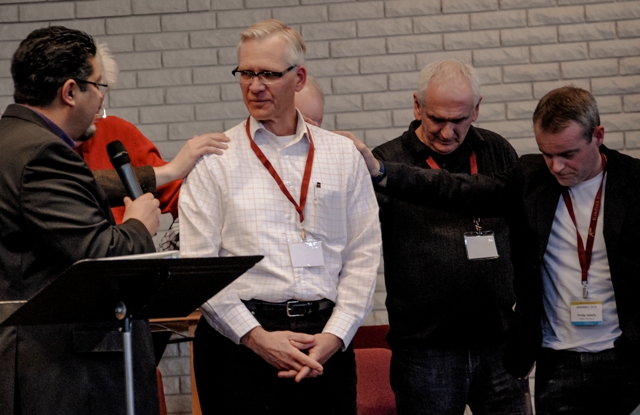 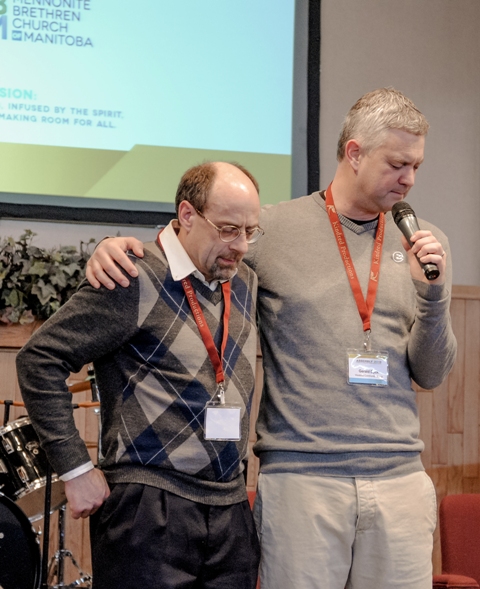