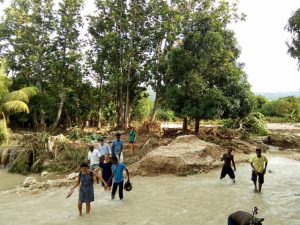 MCC’s assessment team wading through a flooded river in the community of Otovan after Hurricane Irma. PHOTO MCC Haiti

What happens when a country is hit by one vicious disaster after the other?

Hurricane Irma—the most powerful storm ever recorded in the Atlantic Ocean—didn’t end up hitting Haiti with the sort of impact many people feared. That sort of terrible impact was left to places like Antigua and Barbuda, Florida, and Cuba.

But that doesn’t mean residents of the small Caribbean nation—the poorest in the western hemisphere, and one with many ties to Canada—aren’t disproportionately affected.

“It’s easy to think that because Irma’s impact was so much less than what it could have been in Haiti, that things are fine,” says Matthew Van Geest, program manager at Canadian Foodgrains Bank, who coordinates the Foodgrains Bank’s programming in Haiti.

For many Haitians, particularly farmers, life post-Irma is far from fine.

According to the United Nations, agricultural losses due to flooding and high winds in the centre and northern parts of Haiti were significant.

“Many Haitians are small-scale farmers,” explains Van Geest. “For them, losing an avocado tree, for example, is a huge setback. It could mean they won’t be able to afford school fees for their children this year, or they might not be able to afford to see a doctor if someone in the family is sick.”

“For people who already live close to the edge, the loss of that extra income impacts their life significantly.”

“Many people were just barely getting their lives back on track with the current planting season when news of Hurricane Irma came out,” says Van Geest. “Each time a disaster hits is a setback in the climb out of poverty.”

Knowing Haiti is at constant risk for natural disaster means working to end hunger in ways that are unique to such a situation, he adds.

“It means we, as the Foodgrains Bank, have to look at the overall situation, and think about how we can work with people to become less vulnerable to disasters,” he says. “We know the situation probably isn’t going to change soon, so how do we help farmers deal with the impacts of a changing climate?”

Much of Haiti suffers from deforestation and erosion, meaning that when torrential rains fall, such as during a hurricane or tropical storm, they sweep down mountains and hills, taking productive farmland, rickety homes, and infrastructure along with it.

Through the MCC project, land is being re-forested, so that when heavy winds and rains do come, farmers have an added layer of protection.

“For many Haitians, it’s not a matter of “if” people will see their homes, communities and livelihoods destroyed by natural disaster again—it’s when,” says Van Geest.

It doesn’t mean the situation is hopeless though.

One way Canadians concerned about the impact of climate-related disasters on poor countries can help is by contributing to the Climate Fund of Canadian Foodgrains Bank.

All gifts to the fund go toward helping people in developing countries adapt to the effects of climate change. A new project is selected every year. This year, a project working with small-scale farmers in Guatemala was chosen to receive donations from the Climate Fund. In past years, the MCC project in Haiti has received the funds.

Read more on our Climate Fund website. Please pray for Haiti as additional hurricanes during hurricane season continue to potentially impact the country.