What's New
How sweet the sound
One MCC Thrift Store Began With a Few...
A Hunger for Conversation
Getting the mental and emotional rest you need...
The Patience of God
2023 Spirit of MDS Fund accepting grant applications
October 2022 update from the CCMBC Executive Board
Arnold Community Church hosts block party to thank...
When Spring returns
An autumn reset
Home ViewsFrom the community MDS responds to Hurricane Dorian in the Bahamas

MDS will support efforts of local churches in that country

For Kevin King, the destruction left behind in the Bahamas by Hurricane Dorian was “unbelievable.”

“As far as one could see, everything was destroyed or damaged,” he said of his early October assessment trip to that island country. “People were traumatized.”

King visited the two northern islands, the Grand Bahamas and Abaco, that received the most damage.

He was there together with Willie Reimer, a former Mennonite Central Committee (MCC) Canada staff member from Winnipeg, to do an assessment about whether Mennonite Disaster Service (MDS) should respond to the huge needs in the Bahamas.

The visit was made under the terms of an agreement with MCC that allows MDS to take the lead in response to an international disaster requiring expertise in reconstruction and repair, if MCC decides to relinquish its lead role.

As a result of the assessment, MDS has decided to contribute donations received for Hurricane Dorian to two church-related groups working in that country.

A total of $60,000 U.S./$78,885 CDN will be given to Bahamas Methodist Habitat and the Salvation Army. The funds will be used for materials, training, generators, and other ways to assist with their recovery and reconstruction efforts. Additional funds could be made available in the future.

“It’s a very unusual situation for us,” said King, noting MDS only works in Canada, the U.S., and U.S. territories like Saipan or Puerto Rico.

As a result of the assessment, King says the best way MDS can help is by supporting local organizations in the Bahamas.

“Groups that are helping are overwhelmed,” he says. “They can use our support.”

Best of all, he adds, they have local people willing to volunteer, and they know the situation on the ground. “The best way we can be of assistance is by supporting their efforts.”

Of those who donated, King says he is grateful.

“The donations from people across North America show once again how we want to respond as Christians to those affected by natural disasters,” he says.

“Now those donations will be put to good use by partners in the Bahamas who are happy with the support from MDS supporters in the U.S. and Canada.” 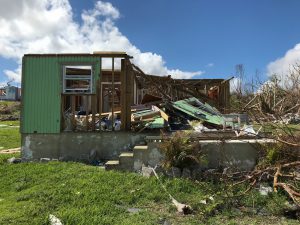 Dorian made landfall in the Bahamas on September 1, 2020, as a category five hurricane. It was the worst storm to ever hit the island country. Damage is in the billions of dollars, and at least 65 people were killed.

MDS continues to monitor the effects of the storm in the U.S. and Canada, including on the Outer Banks of North Carolina.

Mennonite Disaster Service is a volunteer network of Anabaptist churches that responds in Christian love to those affected by disasters in Canada and the United States. While the main focus is on clean up, repair, and rebuilding homes, this service touches lives and nurtures hope, faith, and wholeness.

For generations of Mennonites and other Anabaptist groups, mutual aid has been an informal practice of expressing their faith in the day-to-day actions of caring for one another. Through spontaneous gestures of assistance, such as the well-known barn raising, the Anabaptists put their faith into action when fellow church members or neighbours faced calamity.

writes for the MDS Canada office in Winnipeg.