What's New
A FOCUS on Mission
Must Patience Be So Slow?
Harold Jantz: A Heart for the Mennonite Story
Lorlie Barkman: A Life of Creative Engagement
Last Days, First Days
Women in Ministry: Bertha Dyck
January Moment in Prayer “Holy Spirit—Fill Us!”
The Church as the Patient Body of Christ
Advent: Making Much of Jesus: Christmas Day
Advent: Making Much of Jesus: Fourth Advent
Home News Help for malnourished children in famine-affected South Sudan 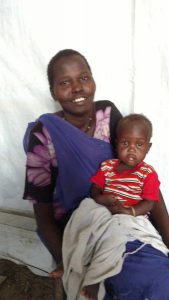 Leaving home with three little children in tow and walking for three days wasn’t an easy decision for Sarah.

It was even harder knowing that making the journey meant risking being attacked by armed robbers or soldiers on the way, and only bringing what they could carry.

But Sarah didn’t have a lot of choices.

Sarah and her children live in South Sudan, a country that has been torn apart by continued conflict for the past three years.

Sarah’s hometown of Leer has been torched, civilians have been hunted down and killed, cattle have been stolen, and women have been abducted and raped.

Leer is also located in Unity State, where in February, 100,000 people were officially declared to be affected by famine by the United Nations. It was the first such declaration anywhere in the world in six years.

With that in mind, Sarah’s decision to undertake a dangerous three-day walk with a baby on her back and two littles ones behind her makes more sense.

The family arrived at a Protection of Civilians camp in the town of Bentiu in August 2016.

Protection of Civilian camps formed spontaneously around United Nations bases when the conflict first began. They provide some protection to people who are scared for their lives.

Sarah and the children stayed there for many months, but the camp wasn’t home, and it had its own challenges.

So Sarah brought her family back home to Leer, hoping things would be better.

But things weren’t any better. It was only a month before fighting in Leer was once again so severe that Sarah took her three children and went back to the protection camp.

The three-day walk and continued lack of food took its toll on the family.

When Sarah arrived back at the camp, she was deeply concerned for the health of her youngest child, Martha, only a year old. The little girl was visibly suffering from severe acute malnutrition; without immediate help, she would soon die for lack of food. 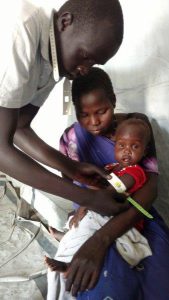 Sarah, a mother of three young children in Unity State, South Sudan, watches as her youngest daughter Martha has her arm circumference measured. Arm circumference is one way of determining if a child is at a healthy weight for their age. After Martha was found to be severely malnourished, Sarah received emergency therapeutic food through Canadian Foodgrains Bank to bring her daughter back to health. She is now growing stronger and recovering. (Photo: World Relief South Sudan)

The food is provided by the World Food Programme free-of-charge.

Through the project, which totals $460,000, about 42,000 pregnant and lactating women and young children found to be below certain levels of malnutrition are receiving treatment through the specially designed high-nutrient foods.

Over the course of eight weeks, Sarah brought Martha to the clinic for screening to see if she was gaining or losing weight, and to receive a weekly supply of Plumpynut specially designed to help children like Martha recover.

After eight weeks in the program, Martha improved. She is no longer close to death.

Sarah says she can see the difference in her daughter.

“She is now happy and playful again, with an increased appetite. I fear what might have happened to my daughter without this program.”

To whom it may concern,
While reading this article I felt compelled to write a response. As a young Christian woman, hearing a story like Sarah’s gives me so much courage. How she was willing to do anything for the safety of her family is truly inspiring. It’s sad to think about how in our world today hearing a story like Sarah’s is not something rare. So many refugees have fled from Sudan, and other conflict infected places. But a lot of them are not finding the help that Sarah and her family received. In a perfect world we would not have to be afraid of who we are. Everybody would be able to embrace different cultures and religions, and we wouldn’t kill each other over disagreements. But this is not a perfect world. This is a world in which in some countries, you have to be afraid for your life while walking down the street. This is a world in which rape, murders, and kidnappings, are not an unfamiliar topic. That being said, I can’t help but wonder why? Why do good people suffer? If God can do everything, than why did he make humans full of so much sin and hate in their hearts? These are questions I ponder constantly, but I know that I will not receive that answer until I myself am standing before the Lord. I pray for Sarah and her family, all other refugees in her similar situation, and you. I pray that you will continue to cover stories like these because I believe that they are important. I pray that one day, your newsletter will be completely full of only happy articles, because war and hurt will be only a vague memory in our minds.
Yours Sincerely,
Carmela Falk