What's New
A FOCUS on Mission
Must Patience Be So Slow?
Harold Jantz: A Heart for the Mennonite Story
Lorlie Barkman: A Life of Creative Engagement
Last Days, First Days
Women in Ministry: Bertha Dyck
January Moment in Prayer “Holy Spirit—Fill Us!”
The Church as the Patient Body of Christ
Advent: Making Much of Jesus: Christmas Day
Advent: Making Much of Jesus: Fourth Advent
Home News Weather can’t stop farmers from helping the hungry 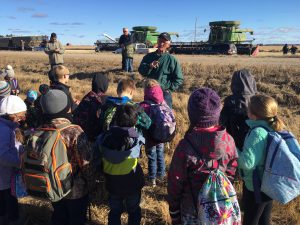 Dennis Reimer addresses students from a local school who came to observe harvest on the farm. PHOTO courtesy CFGB

Darryl Reimer and his father Dennis have been farming and selling crops for the last 14 years to help hungry people in developing countries.

While their efforts have touched the lives of countless people around the world, they consider themselves to be the lucky ones.

“We’re blessed in this country. We have far more than what most people have” says Darryl. “And the promises in the Bible say give and you shall receive. Dad has noticed this in farming, and I believe it to be true.”

Darryl and Dennis, alongside their wives Sherry and Ruth, provide leadership to the Hudson Bay Rotary growing project in Saskatchewan. Each year, they plant, tend and harvest a crop. Once sold, they donate the proceeds to Canadian Foodgrains Bank where it is used to help people who are hungry.

Cooler than normal weather in the Hudson Bay area proved for a more challenging growing season for them this year, though. Darryl says the growing project’s 150-acre field of canola still had a decent harvest, despite the weather.

“It ended up actually being quite good,” he says. “We got 45 bushels an acre, which is a pretty decent canola crop for the year.”

“The hot weather brought on an early harvest, but then for a good five weeks, growers weren’t able to turn a wheel, as they say, due to the rain and cold.”

In the end though, he notes all 27 projects were able to harvest their combined 3,000 acres.

In southwestern Saskatchewan, members of the Grasslands growing project near Swift Current were also pleasantly surprised at their yields.

“We had below average rainfall, about three or four inches of rain altogether,” says project coordinator Bruce Pate.

The project harvested a 134-acre field of durum wheat and a 155-acre field of canola. The fields are about a 30-minute drive apart, but they experienced the same growing conditions—poor moisture levels and spotty rains, which resulted in lower yields than normal.

Pate isn’t letting the below-average yields get him down, though.

“I believe God encourages us to give back, and we have lots to be grateful for,” he says. “So we like to give back, even in tough years.”

Further east in Moosomin, Kyle Penner, coordinator of the Harvest of Hope growing project, is also glad to help hungry people through farming.

“There are a lot of hungry people in this world, and we’re very blessed in Canada,” says Penner. “God has been good to us with a lot of available finances, great ground to grow food, and governance that has given us the opportunity to prosper. Not everyone in the world is so lucky.”

God wants our first fruit. And when you give your first fruit, you get it back in spades. And we feel very strongly that we have been.”