What's New
Through the conflict, life carries on in Ukraine
A FOCUS on Mission
Must Patience Be So Slow?
Harold Jantz: A Heart for the Mennonite Story
Lorlie Barkman: A Life of Creative Engagement
Last Days, First Days
Women in Ministry: Bertha Dyck
January Moment in Prayer “Holy Spirit—Fill Us!”
The Church as the Patient Body of Christ
Advent: Making Much of Jesus: Christmas Day
Home News From model to minister

From model to minister 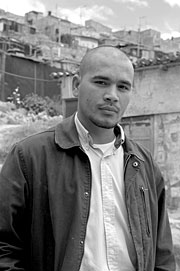 A few years ago, Mennonite Brethren pastor David Bonilla lived in what he calls a “plastic” world. As a professional fashion model in Bogotá, Colombia, his days were spent in high-class neighbourhoods. His Colombia was glittering, glamorous.

Today, he ministers on the outskirts of the city in an area marked by need and violence. Pastor and founder of a church, Bonilla also oversees a preschool and scholarship project.

Throughout the last decade, people forced by Colombia’s long-running armed conflict to flee their homes have flooded Cazucá, where many live in makeshift homes without running water or other basics. Many streets are unpaved, and when rains are heavy the area turns into dangerous, seeping mud that wipes out homes every year.

When Bonilla first began visiting homes in the area, he was stunned by the dirt floors, lack of modern plumbing, and the fact that the water sporadically went off for days at a time.

“Coming to a place like this, it’s just another world,” the 33-year-old said.

But Bonilla didn’t settle for stopping by once in a while. Nine months after he began work in Cazucá, Bonilla and his wife moved into the neighbourhood.

“I want to follow Jesus’ example. Jesus didn’t send somebody. Jesus went. That’s why I’m living here now,” he said. “It was just a way of working well with people.”

This means living in an area where Bonilla will always worry for his wife’s safety as she returns from classes or work, where he will wonder whether his house will still be okay when he returns, where he knows that if someone confuses him for a person who has unsettled accounts in the neighbourhood it could mean an attack or worse.

“One has faith, but you never know what’s going to happen,” he said.

Bonilla’s journey to ministry has its roots in his experiences as an altar server in a Catholic church, his first inkling God was calling him. He was born on the coast, and his parents moved to Bogotá 15 years ago. Bonilla was working as a professional model when a friend invited him to a Baptist church. “It’s just a plastic world,” he said of modelling. “You’re famous, but it’s an empty life.”

In church he found a sense of family and relationships. He began attending a Mennonite Brethren church, Dios es Amor, near his home.

Bonilla began to dream of ministry and thought of becoming a missionary abroad, perhaps in Peru or Brazil. His pastor encouraged Bonilla to explore ministry in Colombia and sent him to Cazucá to meet with a woman who was ill.

His commitment to mission kept him coming back, and his connections to the community deepened. He was soon invited to lead a Bible study for six women. He was introduced to the group as their pastor and quickly grew into the role.

Five years later, he is pastor of the Mennonite Brethren Church of El Progreso. Besides starting a church, Bonilla has served as the driving force behind a neighbourhood preschool, as well as a scholarship program that helps parents pay for school fees, supplies, and transportation for primary and secondary school students.

Mennonite Central Committee’s (MCC) Global Family program helps support the outreach to children, and MCC canned meat is used for the preschool lunches, allowing the school to conserve its scarce monetary resources for other needs. Canned meat is also included in food boxes for families.

“A lot of the families don’t have enough to eat. They need help with food or school. Children don’t have space to go out and play or other safe opportunities for recreation,” he said. So Bonilla strives to meet what needs he can, offering a nurturing and safe environment for young people. He dreams of how the preschool can grow into a school and is working to organize a computer room.

Through the challenges of living in the neighbourhood, through the enormity of the work yet to do, Bonilla is driven by the faces he sees around him. Watching children learning and playing, “I feel I’ve really fulfilled something,” he says.

Saying goodbye to war and hello to peace...