What's New
MCC BC and MDS Flood Response and Partnership
Resilient Leadership: Praying against burnout
Boldly advancing the gospel from our knees
MCC sends food and relief to Cubans in...
Robert Dagenais, pastor of the Sainte-Thérèse church, is...
More donated hay needed to help farmers in...
“God’s time was perfect”
Hope and pray every day
Resilient Leadership: The gift of self care
Project Redemption
Home Arts & Culture Slum youth make music from garbage

Conductor Favio Chávez and 16 Recycled Orchestra musicians — who perform their repertoire on instruments made of recycled materials – partnered with Winnipeg-based Global Family Foundation in their first-ever Canadian tour Apr. 25–May 11, 2014, visiting churches and schools from Southern Ontario to B.C. 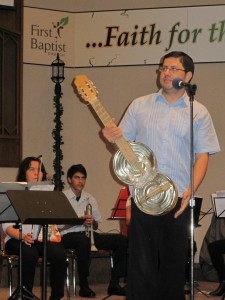 Playing to packed venues, the tour raised money for Global Family Foundation and the people of Cateura, Paraguay, to build a community education centre – and warmed the hearts of audience members with the language of music and the gentle humour of the conductor.

Years ago, when environmental technician Favio Chávez was working in the Cateura area, he saw the need in the community and shared the few instruments he owned with some of the youth in the community. He teamed up with a local fabricator who fashions musical instruments out of garbage. Now with more than 200 members, the orchestra continues to grow.

The Recycled Orchestra provides youth with the chance to discover and develop musical ability and enjoyment, says Chávez. He appreciates how its music unites people.

The orchestra is an activity that is “safe, not on the street, and great for self-esteem,” says Mike Duerksen, Global Family Foundation director of operations and a member of North Kildonan MB Church, Winnipeg. 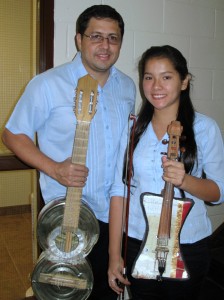 Global Family Foundation describes Cateura as “a community of shacks built on a landfill, and the slum is considered among the poorest in South America. More than 2,500 families live directly by the landfill, picking garbage to find sellable or recyclable goods.” Many of the children living in Cateura attend state-funded schools where tuition is free; however, the institutions may be poorly run and over-crowded.

Eventually, many students will drop out of school and begin sorting through garbage as an occupation to help their families, says Duerksen. Gang involvement and crime and substance abuse are major issues for youth who see limited opportunities regarding the future.

“Talent is evenly distributed but opportunity is not,” says Duerksen. As a “Christian charity dedicated to breaking the cycle of poverty in Latin America through Christ-centred education, training and social programing,” Global Family Foundation is working with Cateura to create a space in which people living in poverty can be educated, explore new skills and opportunities, and encounter the love of God. 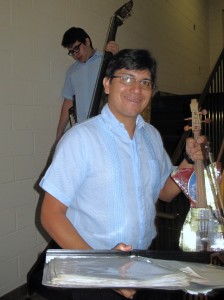 “Everything we do is a model of co-investment,” says Duerksen. Many of the foundation’s schools are run by local churches, “often as an extension of the community outreach they are already doing.” He says the centre will not be a handout as the Cateura community will be taking part in the building process in addition to supplying the land for the project.

Duerksen calls Global Family Foundation’s approach holistic because they use education to rise above physical scarcity and to introduce the gospel “which helps people break free from spiritual poverty.” He says that participation in the orchestra fills people’s needs for music and community. He sees it as a “great example of the tremendous, tremendous potential of people regardless of circumstances.”

“[The musicians] take something we call junk and make something new out of it” – just like God does with people, says audience member Erna Derksen at the Waterloo concert. 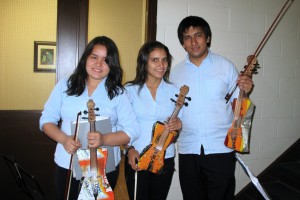 Groups such as the Recycled Orchestra are a light amid immense hardship, says youth pastor Rafael Duerksen at Wainfleet (Ont.) Brethren in Christ Church, one of the concert hosts.

“What’s encouraging to me is the hope that comes out of [the Recycled Orchestra],” he says, “And taking this through the world and being able to make change happen in the community.”

Rachel Dyck is a member of Waterloo MB Church.

Find tour dates on the calendar.

Listening things into being