What's New
A FOCUS on Mission
Must Patience Be So Slow?
Harold Jantz: A Heart for the Mennonite Story
Lorlie Barkman: A Life of Creative Engagement
Last Days, First Days
Women in Ministry: Bertha Dyck
January Moment in Prayer “Holy Spirit—Fill Us!”
The Church as the Patient Body of Christ
Advent: Making Much of Jesus: Christmas Day
Advent: Making Much of Jesus: Fourth Advent
Home News “The disaster, the danger, isn’t over” 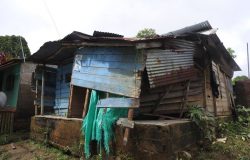 A home in Carlos Andres Palacios Lozano’s neighbourhood in Suruco shows sign of damage after heavy flooding in the region caused water levels to rise to the second floor of most homes. (MCC Photo/Brendah Ndagire)

Between Oct. 17 and 21, 2016, intense rainfall caused severe flooding along Colombia’s Pacific coast in the Chocó area, seriously damaging the homes of more than 20,000 people.

In Chocó province (northwestern Colombia, adjacent to Panama), Mennonite Brethren churches are present in three regions most heavily affected by flooding in the province: Condoto, Medio San Juan and Novita.

Carlos Andres Palacios Lozano, a member of Sión Mennonite Brethren Church, is deeply affected by the flooding. Lozano lives and works in the community of Suruco, Chocó with his wife and two children. Suruco is a town only accessible by boat on one of the major rivers in Chocó, the San Juan.

Lozano recalled that at around 1 a.m. on Oct. 19, 2016, heavy rains caused the river to quickly overflow, flooding his home and entire community.

“We have become accustomed to the rising and flooding of the river,” he said, “but it had never flooded to this magnitude before.” 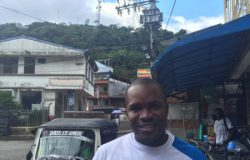 Carlos Andres Palacios Lozano, pictured in the municipal capital, Istmina, buys some supplies for his home in Suruco that was completely flooded days before. (MCC Photo/Brendah Ndagire)

Lozano and his family live in one of the areas farthest from the river, but even there the water reached the house. He was able to save his chickens from drowning, but other people in the area, some of whom depend upon the sale of chickens and eggs for their livelihood, lost them all. Damage extended to other sources of food and income, destroying crops and a community fish farm.

Local food stores were flooded and Lozano said he couldn’t go to neighbouring towns because the river was impassable.

As the floodwaters receded, the church, a Mennonite Central Committee partner, began responding with its own resources to the needs of those affected through serving soup to the community.

MCC is responding to the basic needs of those affected by providing humanitarian assistance through the Mennonite Brethren church to 500 families in 11 rural communities who have lost everything.

Families will receive a package of non-perishable food items to last two weeks, including rice, pasta, oatmeal, canned tuna, lentils and maize flour. They will also receive blankets, a mattress and kitchen supplies. 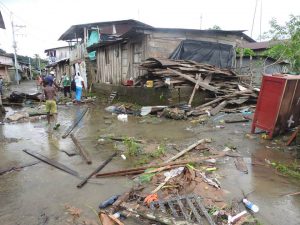 Despite having suffered water damage of his own, Pastor Jesus “Jabez” Benitez (pictured in the back of the photo in the green vest) was one of the church members to head down river as part of a delegation from the Mennonite Brethren church to assess damage in Bebedo, the community where Benitez pastors. (MCC Photo/Brendah Ndagire)

Despite the losses they have sustained, many in the community are playing an active role in responding to the victims and looking for ways to prevent future damage by flooding. Pastor Jesus “Jabez” Benitez, of the Bebedo Mennonite Brethren Church, lost many of his belongings when his home in Andagoya flooded to the second level.

“After the floods,” he said, “[many] people were without hope, without anything. People didn’t just lose homes, but also their crops and agriculture, many appliances, mattresses and more.”

The MCC assistance will help, but according to Benitez, “the disaster, the danger, isn’t over.”

Since October, the San Juan and its tributaries have flooded homes in some of the communities closest to its banks twice more, and people continue to struggle as they lose their homes, sources of food and income. In order to respond to these pressing and ongoing needs, continual prayer and further resources are needed.