What's New
Through the conflict, life carries on in Ukraine
A FOCUS on Mission
Must Patience Be So Slow?
Harold Jantz: A Heart for the Mennonite Story
Lorlie Barkman: A Life of Creative Engagement
Last Days, First Days
Women in Ministry: Bertha Dyck
January Moment in Prayer “Holy Spirit—Fill Us!”
The Church as the Patient Body of Christ
Advent: Making Much of Jesus: Christmas Day
Home News Saying goodbye to war and hello to peace in Colombia

Saying goodbye to war and hello to peace in Colombia

MCC partners respond to peace accord 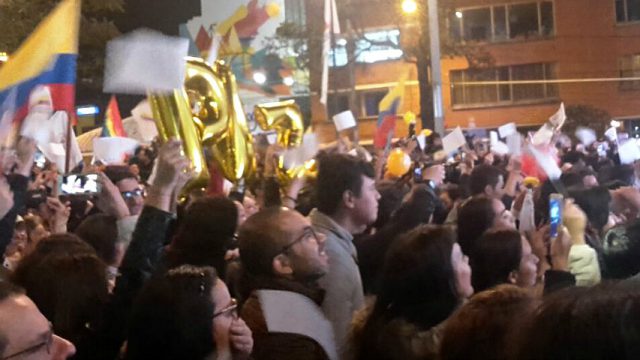 On August 24, 2016, Colombians celebrate during the announcement that an agreement has been reached between the government and FARC guerrilla group, ending the longest-running conflict in the Western hemisphere. Photo courtesy of Mencoldes Foundation.

Angélica Rincón could not stop smiling. All around her, crowds of people cheered and waved signs, banners and Colombian flags. Rincón – like others who partner with Mennonite Central Committee – had longed for this turning point toward peace for many years.

On August 24, 2016, hundreds gathered in the city centre of Bogotá to celebrate an historic peace accord between the Colombian government and FARC guerilla group. The announcement, delivered by Colombian president Juan Manuel Santos and FARC leader Timochenko, was broadcast live from Havana and shown on large screens throughout the country.

After nearly four years of negotiations, the permanent ceasefire agreement effectively ended the longest-running armed conflict in the Western hemisphere. Fighting between diverse armed groups has killed some 260,000 people and displaced close to seven million since 1958.

Rincón spends her youthful energy working with MCC partner Justapaz, the Mennonite centre for justice and peace in Bogotá, and believes the moment was “the fruit of the work of Colombians who, over the years, have prayed for and asked that both sides cease their armed confrontation.

“The accord is an opportunity to begin to change the country’s history of violence, and this fills us with hope. Finally, the prophetic word of Isaiah 2:4 – where swords are beaten into plowshares – can be a reality in Colombia!”

A long journey toward peace

For Colombian Anabaptists like Rincón, with whom MCC has partnered since the mid-1970s, the journey toward peace began much longer than four years ago.

For decades, this relatively small community – with just over 4,000 members – has worked to build peace in a variety of ways throughout different regions of Colombia.

Justapaz advocates for victims of violence and promotes conscientious objection. Mencoldes – the relief and development arm of the National Colombian Mennonite church and the Mennonite Brethren church – supports victims of armed conflict with emergency assistance in the cities of Bogotá and Ibagué. And in the Chocó region, MBs help small-scale farmers find viable alternatives to growing illicit crops.

Local Anabaptist churches are also actively engaged in peacebuilding, becoming safe havens for children and youth who are at risk of being recruited into armed groups and gangs.

For Rincón, building the kingdom of God as a faithful witness means meeting under a mango tree with farmers who are under threat from paramilitary organizations, discussing non-violent solutions to their problems.

While these churches and faith-based organizations celebrate Colombia’s new peace accord, some emphasize it will not automatically bring peace to every corner of the country.

“Ending the war doesn’t mean ending the violence,” says Alejandra Arboleda of the Mennonite Brethren peace education foundation in Cali called Edupaz. “But without a doubt, this is an indispensable step for rebuilding a country with deep wounds; and why not hope that the promise of Isaiah may be fulfilled, that the wolf and the lamb will eat together at the table?”

Ricardo Esquivia, director of the peace and justice organization Sembrandopaz, also highlights the importance of social justice as the foundation for a true and lasting peace.

“Today an important and significant step was taken for the Colombian people. We, as a people, from the grassroots, with our hand to the plow and our feet on ground, are looking forward with expectation… we welcome the accord, continuing to cultivate peace in our region as we have been doing for all these years.”

The Chocó Mennonite Brethren recognize the importance of education to the process. They are concerned that this development “will not actually lead to change in rural areas which have been most affected by the violence.

“We believe a simple pedagogical process should be facilitated with businesses, churches, universities and communities, so the agreement can be lasting and respected by all. Colombia should be congratulated for this progress toward peace, which will be complete with Christ in our hearts.”

On Oct. 2, 2016, Colombians will vote to show their approval or disapproval of the agreement. Uncertainty remains. In the meantime, MCC will continue to support Colombian churches and Anabaptist partners in pursuit of peace.

To learn more about MCC’s peacebuilding projects, go to mcccanada.ca/peace.

—Elizabeth Phelps is the MCC representative for Colombia.

Find out more about MBs in Colombia:

• From model to minister