What's New
“I’m Sorry” : Pope Francis addresses a “deplorable...
A matter of love: Reframing abortion
“Any chance you might be expecting a goldfish?”
Abortion, the image of God, and faithful witness...
Choosing motherhood: The sacrifice of honouring life
MWC Assembly small but full of joy
Bad back doesn’t hold back MDS volunteer
Transition in CCMBC National Faith and Life Leadership
Leading through the trauma of covid: Part three...
The church distracted: When the main thing is...
Home Life & Faithfeature articles Cautious optimism as Colombian peace talks set to begin

After decades of armed conflict, many Colombians, including representatives from Anabaptist groups, are cautiously optimistic that upcoming talks will help build sustainable peace in the country. 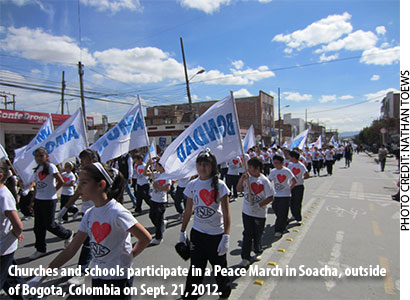 On Aug. 27, 2012, the president of Colombia, Juan Manual Santos, announced official peace talks between the government and the Revolutionary Armed Forces of Colombia (FARC) will commence Oct. 14, 2012, in Norway, and continue in Cuba.

The FARC has been the largest and most active guerilla movement in Colombia since the 1960s. There have been attempts to resolve the ongoing armed conflict between the state and illegal armed groups, including the FARC, since the 1980s. However, none of these talks have led to a sustainable, comprehensive peace agreement and an end to the armed conflict.

A day after the president’s announcement in August, the Latin American Council of Churches, the Peace Commission of the Colombian Council of Evangelical Churches, and others, issued an official declaration supporting the peace talks. Signatories to the declaration included two pastors from Anabaptist denominations (Mennonite and Brethren in Christ), the director of Justapaz (an MCC partner) and the general secretary of the Mennonite World Conference (Mennonite Brethren César García).

Two days later, another statement issued by several civil society and church organizations described the search for peace as an urgent ethical and political imperative for Colombia. Among the signatories were Justapaz and the Mennonite Church of Colombia.

Both statements praised the official efforts to begin a formal peace process. Such an announcement brings hope to those working for peace in Colombia, said Rebekah Sears, an MCC worker in Colombia.

However, both statements also highlight the problems with previous peace efforts, and acknowledge the complexities of the situation of Colombia and the obstacles to peace. The statements urge churches and broader society to become involved as much as possible through dialogue and actions. In this way, the work of peace will extend beyond the state and national level and into local communities.

For more information on the issues in Colombia, and to follow current developments in peace talks, visit MCC’s Latin America advocacy blog: lacaadvocacy.wordpress.com.